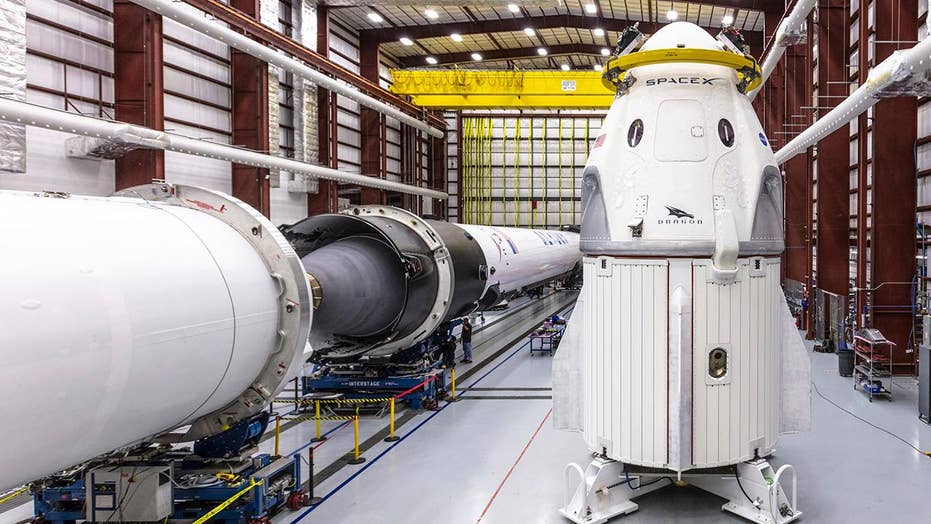 SpaceX’s Crew Dragon capsule will make its debut when it launches atop a Falcon 9 rocket from Kennedy Space Center early on Saturday.

Dubbed DEMO-1, the launch from Kennedy Space Center's historic Launch Complex 39A is scheduled for 2:49 a.m. EST on Saturday. Most famously, the launch pad was used in 1969 to send the Apollo 11 astronauts to the Moon.

Saturday's eagerly-anticipated launch is the first under NASA's Commercial Crew Program. The Crew Dragon capsule, which is designed for astronauts, will not be carrying any human crew when it makes its journey to the International Space Station. Instead, a test dummy will be traveling in the capsule, which is expected to dock with the ISS Sunday.

A SpaceX Falcon 9 rocket with the company's Crew Dragon spacecraft onboard is seen as it is raised into a vertical position on the launch pad at Launch Complex 39A as preparations continue for the Demo-1 mission, Thursday, Feb. 28, 2019. (Joel Kowsky/NASA via AP)

In a nod to the iconic movie “Alien,” SpaceX CEO Elon Musk tweeted a picture that appeared to show the dummy sat in the capsule. “Ripley,” Musk wrote in a post accompanying the picture, referring to the character played by Sigourney Weaver in the famous film and its sequels.

The six-day test flight is a crucial step in SpaceX’s plan to provide human spaceflight.

NASA doesn't expect this crucial shakedown cruise to go perfectly. But the lessons learned should improve safety when two NASA astronauts strap into a Dragon as early as July.

The SpaceX Falcon 9 rocket with the Crew Dragon spacecraft onboard is seen after being raised into a vertical position on the launch pad at Launch Complex 39A Feb. 28, 2019. (Photo credit: NASA/Joel Kowsky)

Boeing is also in the race to end NASA's eight-year drought of launching U.S. astronauts on U.S. rockets from U.S. soil. Since the retirement of the space shuttle in 2011, the U.S. has been relying on Russian Soyuz rockets, launched from Kazakhstan, to get astronauts to the ISS.

Last year NASA announced the nine astronauts that will crew the test flights and first missions of the SpaceX Crew Dragon and Boeing CST-100 Starliner spacecraft.

This undated photo made available by SpaceX on Feb 6, 2019 shows the Dragon crew capsule atop a Falcon 9 rocket at the launch pad at Kennedy Space Center in Florida. (SpaceX via AP)

Boeing’s unmanned Orbital Flight Test is targeted for launch no earlier than April, according to NASA.

2019 is a big year for NASA. In addition to a host of space missions, July 20 marks the 50th anniversary of the historic Apollo 11 Moon landing,