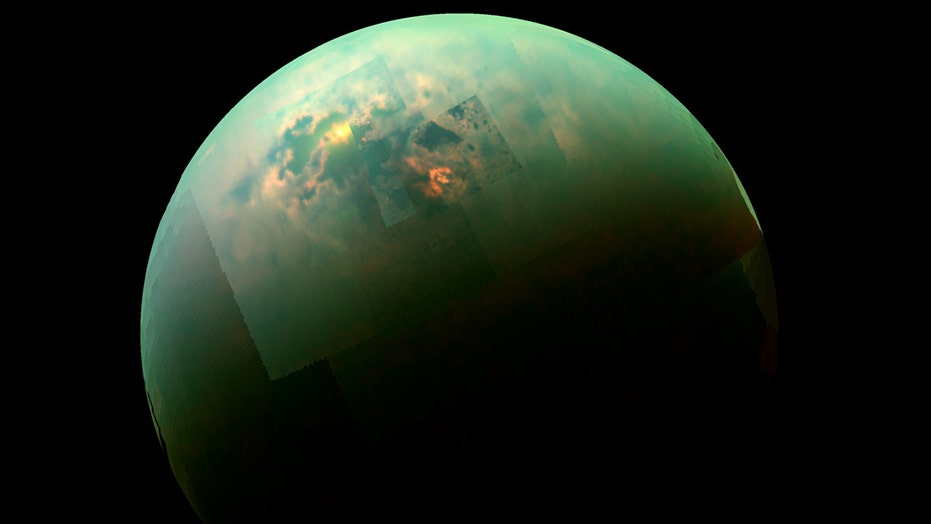 Saturn's largest moon, Titan, has several odd weather patterns, including multi-decade polar vortexes and dust storms. A new study has revealed there is a significant difference in the amount of solar energy it absorbs and the thermal energy Titan emits during its seasons, which could give researchers new insights into our own climate.

Known as an energy budget, there are significant differences in solar and thermal energy levels during the moon's three seasons. The Earth has a small energy imbalance, something that has had "significant effects on its global warming and climate change," according to the study's co-author, Liming Li.

The colorful globe of Titan passes in front of Saturn and its rings in this true-color snapshot from NASA's Cassini spacecraft in 2011. Image credit: NASA/JPL-Caltech/Space Science Institute

The researchers noted that thermal emissions decreased by approximately 6.8 percent and solar energy levels dropped approximately 18.6 percent. Differences in the energy budgets were spotted in the moon's Northern and Southern Hemispheres and were influenced by the distance between the Sun and Titan during its orbit, "implying a significantly dynamical energy budget on Titan," according to the study's abstract. Saturn orbits the Sun once every 29 Earth years.

They used data from NASA's Cassini spacecraft to make their seasonal variation observations. Cassini found that approximately 65 percent of Titan's surface is covered by plains and the mysterious lakes are near the moon's north pole.

Cassini, which orbited Saturn for 13 years and whizzed past Titan 120 times, made its "death plunge" into Saturn’s atmosphere in September 2017, ending a 20-year long journey.

"By studying Titan, we can learn a lot about Earth," the study's lead author, Ellen Creecy, added. Like Earth, Titan has an atmosphere, surface lakes (albeit ones filled with methane) and a hydrologic cycle similar to our planet.

Last month, the space agency mapped out the celestial satellite for the first time, further showcasing its similarities to Earth. The map points out six geological features on Titan, including plains, dunes, craters, lakes, "hummocky or mountainous terrains" and other types of terrains.

One of the study's co-authors, Xun Jiang, said the findings suggest that the distance between the Sun and the Earth plays a role in the planet's energy balance, adding that more work is needed to compare the energy budgets of Titan and Earth.

Saturn's moon Titan has a unique surface that's hard to see through its nitrogen-rich atmosphere. (NASA/JPL/University of Arizona)

"The possible energy imbalance means that Titan's atmospheric system keeps evolving," Creecy added, also noting more work is needed to understand what the implications of the imbalance are for Titan. "There are complicated interaction between the energy budget and atmospheric system, which is being explored by our research."

The study has been published in the scientific journal Geophysical Research Letters.

Titan continues to be a source of fascination for researchers, with some even suggesting it could support life. Earlier this year, NASA announced the latest mission in its New Frontiers program to explore the moon.

Titan, Saturn's largest moon appears before the planet as it undergoes seasonal changes in this natural color view from NASA's Cassini spacecraft in this handout released by NASA August 29, 2012. (REUTERS/ NASA/JPL-Caltech/SSI)