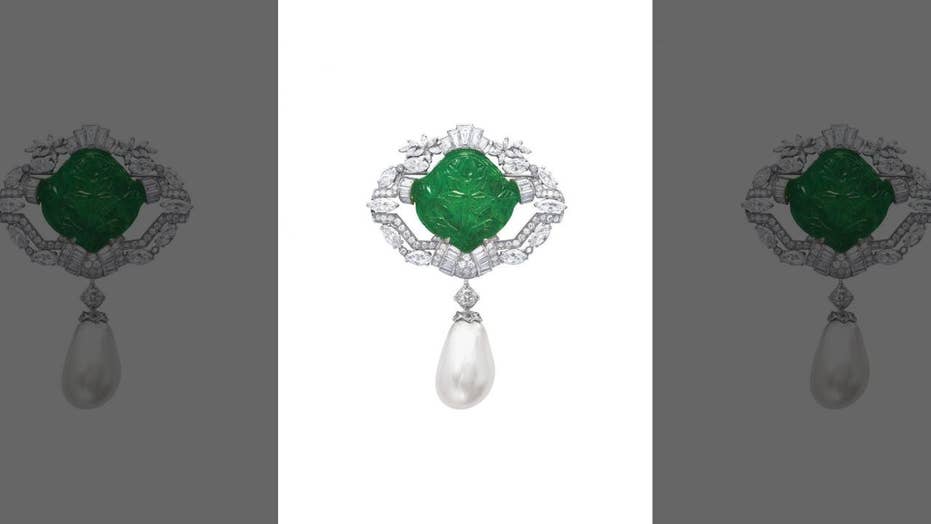 A gorgeous and very rare Ana Maria pearl brooch-watch is set for auction next week in Geneva.

The piece features a drop-shaped natural pearl of 30.24 carats, carved emerald and vari-cut diamonds, according to the auction house Christie's.

The stunning jewel's provenance was revealed in part because of analysis work performed at the Swiss Gemmological Institute (SSEF) in Basel, which supports the jewel's documented history.

The team of gemmologists at SSEF was able to analyze the age of materials containing organic compounds based on the carbon isotopes within the object. One isotope, carbon-14, is radioactive and unstable. Over time, it decays and acts like an internal clock.

The above brooch, featuring an Ana Maria pearl, is set for auction at Christie's. (Christie's)

Gemmologists had to carefully take a very tiny sample within the jewel's "drill hole" in order to do the testing. Once that happens, they can count backward to determine the age of the jewel.

"[This jewel] has an absolutely fascinating historical background. The aesthetic aspect and the scientific aspect, all of this together makes it a very unique icon," Michael Krzemnicki, director of SSEF, told Fox News in a phone interview.

The Ana María pearl is said to date back to the beginning of the 16th century, during the reign of King Charles V of Spain and Isabella of Portugal.

Ana Maria de Sevilla, who bequeathed the gem to her eldest daughter, is seen above. (Christie's)

The King is believed to have passed the original brooch set on to his Secretario Universal and his spouse Maria de Mendoza and Pimentel, daughter of the Count of Ribadavia, according to the auction house.

Sadly, the brooch was taken apart over the years; today only the central pearl and the carved emerald remain.

The pearl was reportedly passed from generation to generation, from mother to daughter, and has remained in the family throughout.

The auction house believes the brooch-watch could fetch up to $1.2 million on May 15.