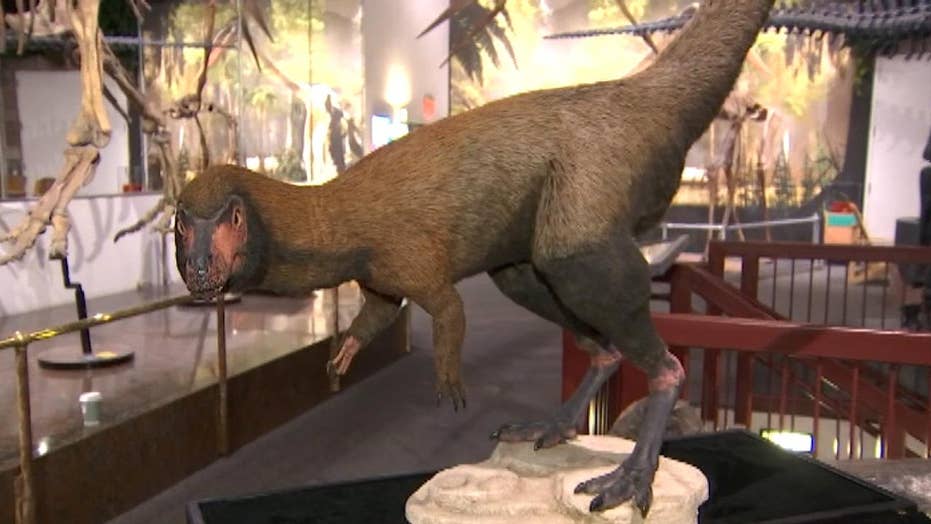 The Arizona Museum of Natural History announces the discovery of a mid-Cretaceous Period tyrannosaur.

A tiny 3-foot-tall relative of the Tyrannosaurus rex has been discovered and named.

The new dinosaur, dubbed Suskityrannus hazelae, was found by Virginia Tech paleontologist Sterling Nesbitt in New Mexico 1998. Nesbitt, who is now an assistant professor in Virginia Tech’s Department of Geosciences, was a 16-year-old high school student when he found the fossil during a New Mexico dig expedition.

For almost 20 years, however, experts did not realize the importance of the discovery. “Essentially, we didn’t know we had a cousin of Tyrannosaurus rex for many years,” Nesbitt said, in a statement. Initially, researchers thought they had the remains of a dromaeosaur, such as Velociraptor.

In a paper published in Nature Ecology and Evolution, experts explain that the 92-million-year-old fossil is actually a relative of the famous Tyrannosaurus Rex. “Suskityrannus has a much more slender skull and foot than its later and larger cousins, the Tyrannosaurus rex,” Nesbitt explained, in the statement. “The find also links the older and smaller tyrannosauroids from North America and China with the much larger tyrannosaurids that lasted until the final extinction of non-avian dinosaurs.”

The last non-avian dinosaurs became extinct 65 million years ago, according to National Geographic.

Scientists say that Suskityrannus hazelae was about 9 feet long and weighed between 45 and 90 pounds, compared to a fully-grown Tyrannosaurus rex, which weighed around 9 tons.

“Suskityrannus gives us a glimpse into the evolution of tyrannosaurs just before they take over the planet,” Nesbitt said, in the statement. “It also belongs to a dinosaurian fauna that just proceeds the iconic dinosaurian faunas in the latest Cretaceous that include some of the most famous dinosaurs, such as the Triceratops, predators like Tyrannosaurus rex, and duckbill dinosaurs like Edmotosaurus.”

WHAT'S THE CONTROVERSY OVER THE BABY T. REX LISTED ON EBAY?

In another project, paleontologists recently discovered a new spike-armored dinosaur in Texas. Paleontologists in Canada have also touted the discovery of the world’s largest Tyrannosaurus rex.