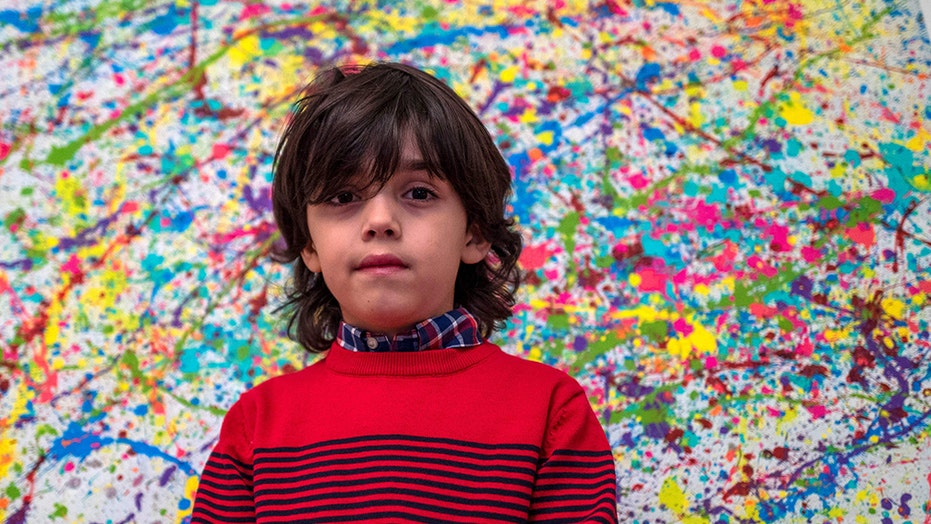 A 7-year-old painter has taken the German art world by storm.

Mikail Akar, who was born in Cologne, is an expressionist art prodigy whose paintings are now selling for thousands of dollars across the world.

"At just 7 years old, he is established in the art world. There is interest from Germany, France and the USA," his father and manager, Kerem Akar, told AFP.

The child's talent was reportedly discovered when his dad gave him a canvas and some paint for his fourth birthday.

7-year-old German artist Mikail Akar poses in front of a limited print edition of his "Champi" painting, prior to the opening of his "Manus 11" exhibition in Berlin on December 13, 2019. (JOHN MACDOUGALL/AFP via Getty Images)

"The first picture looked fantastic, and I thought at first that my wife had painted it," Kerem Akar said. "I thought maybe it was just coincidence, but by the second and third pictures it was clear he had talent."

One of Mikail's pieces, produced in collaboration with Germany and Bayern Munich football star Manuel Neuer, recently sold for $12,000.

The child told AFP that he idolizes Jackson Pollock, Michael Jackson and Jean-Michel Basquiat. His work can be seen on his Instagram page, which is also managed by his father.

"When I'm older, I want to be a football player," Mikail said, discussing a recent 8-0 victory with his school team.

His father also explained that he and his wife don't push their son, that they turn down many requests and that they try to shield him from the trappings of fame.

"He only paints when he wants to. Sometimes that is once a week, sometimes once a month," his father told AFP.

7-year-old German artist Mikail Akar poses in front of a print edition of his "Champi" painting (right) and his painting "Sonnenblume Mensch" (Sunflower Man) (left) prior to the opening of his "Manus 11" exhibition in Berlin on December 13, 2019. (Photo by JOHN MACDOUGALL/AFP via Getty Images)

Diana Achtzig, director of the Achtzig Gallery for Contemporary Art in Berlin, told the AFP that she was impressed by Mikail's "imagination and variation."

"As long as he has someone supporting him and not exploiting him, then he has a great future ahead of him," she said.