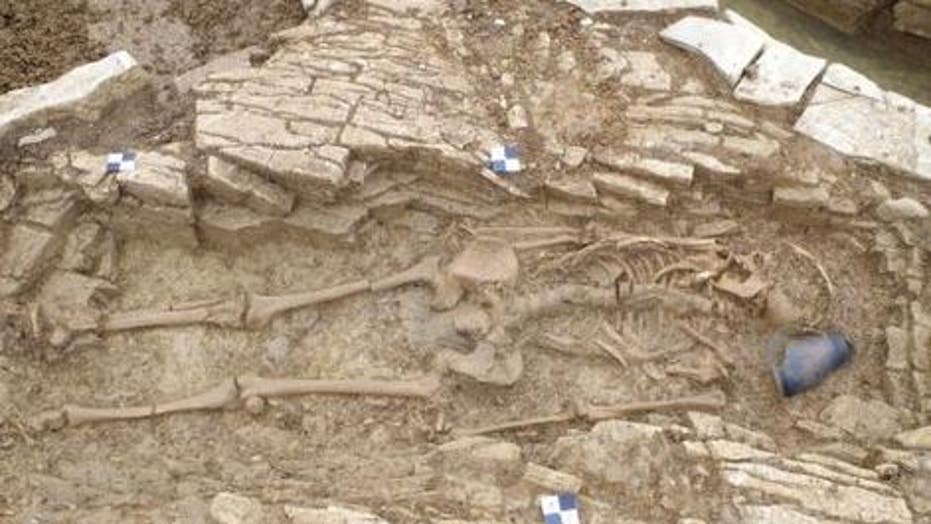 Archaeologists recently unearthed graves of more than 50 adults and children in a strange Roman cemetery that was found in the United Kingdom.

The discovery gives researchers new insights into what it was like in the southwest of the U.K. after the Romans invaded.

Some of those buried at the cemetery in Somerton were members of high society, and scientists were struck by the graves' structure. They were mostly capped and sealed with the type of slabs used to build roofs in the area 2,000 years ago.

The remains of a woman believed to have been buried with a pillow behind her head were among those found. (Wessex Archaeology)

Steve Membery, an archaeologist and member of the South West Heritage Trust that has overseen the excavations, said in a statement: “This site is a significant discovery. The individuals were evidently of some status. Most graves in Roman Britain are pretty much a rectangular cut with someone laid on their back. They’ve actually built these graves. There’s been a lot more care taken over these.”

Other items discovered reportedly include “grave goods” such as pottery and jewelry, a coin from the time of Emperor Vespasian and a piece of carved bone.

The team plans to carry out DNA analysis to learn more about the people who were buried at Somerton.

BRIGHT STAR MAY HAVE BEEN A 'CANNIBAL,' SCIENTISTS SAY

Faye Purbrick, the cabinet member for education, said in a statement: “The findings are both exciting and extraordinary, providing us with valuable insight into Somerset’s early history. We will be able to understand so much more about the lives of Roman people in Somerton thanks to these discoveries.”