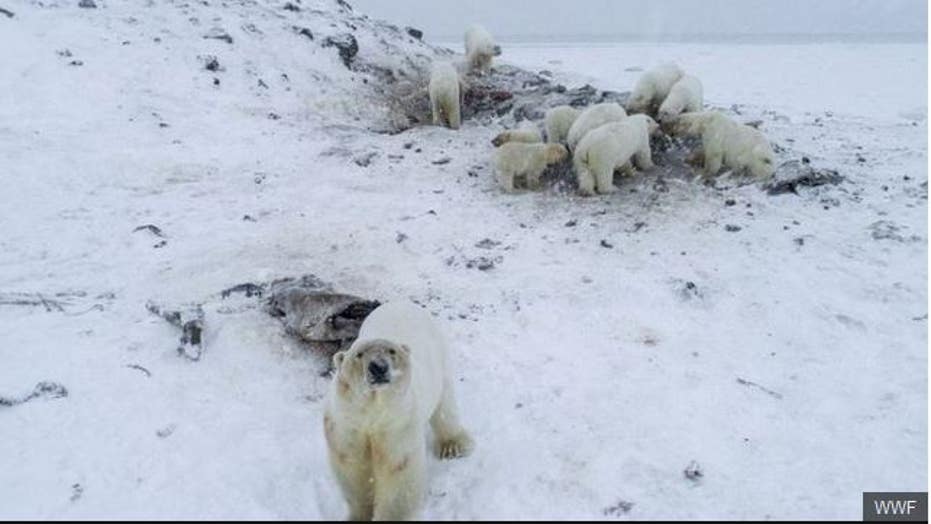 A village in Russia's Far North has been overrun by more than 50 polar bears.

All public activities have reportedly been called off in Ryrkaypiy, in the Chukotka region, and schools are being guarded so that the bears don't wander inside.

The animals were "both adult and young... there were females with cubs of different ages," she said, adding that almost all of them appeared to be thin.

Although the polar bears normally reside on Cape Schmidy, about 1.4 miles away, a World Wildlife Fund conservationist said the area has been experiencing warmer than typical weather.

"If the ice were strong enough the bears, or at least some of them, would have already gone to sea, where they could hunt for seals or sea hares," he told BBC News.

That video was posted to Facebook by a World Wildlife Fund employee, as Fox News previously reported, and it sparked outrage online.

Anatoly Kochnev reportedly told Tass news agency that polar bear visits are increasingly frequent and that five years ago, only about five bears got close to the village.

The polar bears have traveled close to the village. (Maksim Dyominov / WWF-Russia)

"I as a scientist believe [Ryrkaypiy village] should not remain there," he told Tass. "We try to control the situation, but nobody would want to think what may happen there in three to five years."

The BBC reported that Russian media has speculated that the spray-painted bear may be linked to local anger over the animals entering communities in Arctic Russia. An investigation has been launched to find out where the footage was captured, it reported.