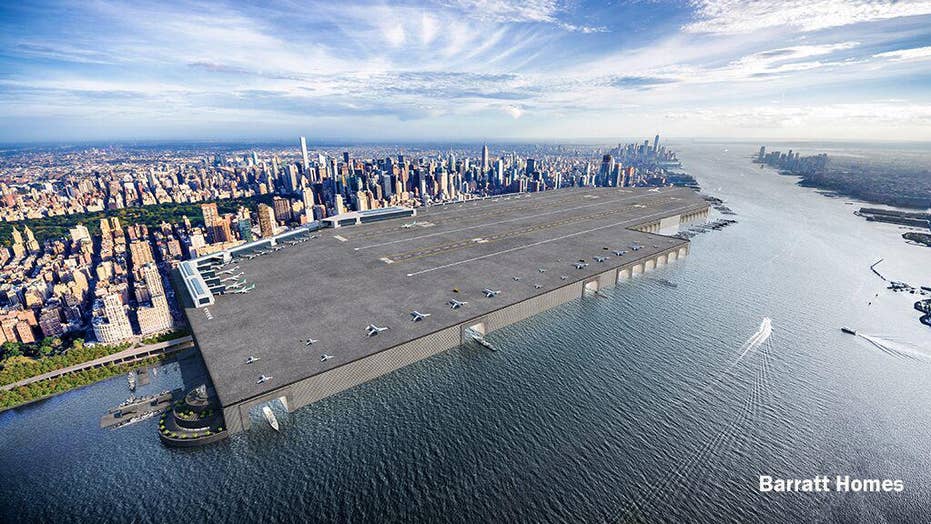 The skyline-transforming New York City buildings that were never constructed

If architects throughout history had their way, the iconic New York City skyline would look quite different. U.K. homebuilder v commissioned a series of 3D renderings to imagine how historically abandoned building designs would look in modern New York. Among concepts originally introduced by Life Magazine and the 1984 National Endowment for the Arts competition, architects envisioned a 425 foot tall monument to George Washington, a totem-style Times Square tower, and the massive 144 square block Midtown Manhattan Airport.

New York may be home to the iconic Statue of Liberty and dozens of other monuments, but the city would look very different if a number of epic building designs had actually been constructed.

From an airport in Midtown Manhattan to an imposing tower in Times Square and a vast ancient Greek-style complex on Roosevelt Island, the projects would have completely changed the face of New York. U.K. homebuilder Barratt Homes has commissioned a series of 3D renderings that reveal what the remarkable designs would look like against the backdrop of the modern city.

A rendering of how the Midtown Manhattan Airport would look today. (Barratt Homes)

New Yorkers who complain about the noise levels in Manhattan should be grateful that they do not have to contend with an airport built literally over their heads.  A Life Magazine article in 1946, via Ptak Science, described the plan to build “New York City’s Dream Airport” 200 feet above street level across 144 square blocks. The bizarre airport would have stretched from 24th to 71st streets and from the Ninth Avenue to the Hudson River, according to the report.

An aerial view over midtown Manhattan and the Hudson River today. (Barratt Homes)

Costing a massive $3 billion ($39 billion in today’s money), the gigantic “landing deck” aimed to bring “air service right into the heart of New York City and eliminate the necessity of limousine travel to and from existing airports which are 10 miles outside the business districts,” Life reported.

In a blog post, Barratt Homes explains that the Midtown Manhattan Airport was the brainchild of real-estate mogul William Zeckendorf, who at the time owned the Chrysler Building and the Astor Hotel. “Despite the eye watering cost, Zeckendorf was confident that the airport would pay for itself within a mere 55 years, thanks to the level of rental income generated by the many retail units, restaurants and companies that would have occupied the space beneath the landmark runway,” Barratt Homes explains.

At the start of the 20th century, Roosevelt Island, then known as Blackwell’s Island, was home to asylums, quarantine hospitals, prisons and a workhouse. In response to ex-congressman John De Witt Warner’s call for civic centers befitting a city of New York’s stature, architect Thomas J. George outlined an ambitious plan to build a vast neo-classical complex on the island in the East River.

George described his plan for the civic center in an issue of “House and Garden” published in 1902, according to the New York Public Library Division of Art, Prints and Photographs.

“George’s design would truly have been a sight to behold,” explains Barratt Homes in its blog post. “With the Municipal building stretching over seven blocks long and standing at a height of 600 feet; without any buildings to surround it the civic centre would have been a permanent and historic landmark in the city.”

The famous “Crossroads of the World” could have featured a “totem-style tower” if an unusual design for Times Square had been adopted in the 1980s.

A 3D rendering of the Times Square Tower. (Barratt Homes)

Barratt Homes explains that in 1984 the Municipal Art Society and National Endowment for the Arts launched a competition for visually striking ideas that could regenerate the Square.

“Offering a $10,000 prize for the winner, the competition received more than 500 entries ranging from the classical to the bizarre,” notes Barratt Homes in its blog post. “Of all the entries, George Ranalli’s proposition was perhaps the most striking: A totem-style tower featuring a sphere nestled within the body and stepped pyramidal forms at the very top. The building was intended to reflect the theatrical and eccentric nature of Times Square.”

Manhattan’s bustling Union Square was once earmarked to be the site of a massive monument to George Washington. Designed by 19th-century New York architect Calvin Pollard, the gothic style George Washington Monument would have been 425 feet high.

“The tower would have been almost double the height of any other building in the city and would have contained over 400,000 books within its library,” explains Barratt Homes. “The second floor was to house a statue of George Washington holding the Declaration of Independence, surrounded by La Fayette and other foreign allies.”

The monument, which had an estimated cost of $400,000, was ultimately scrapped over objections to the design and a lack of available funds, according to Barratt Homes. Instead, the city erected a bronze equestrian statue of George Washington by Henry Kirke Brown, which was dedicated in 1856. The area around the statue became a vigil site for New Yorkers in the aftermath of the September 11, 2001 terrorist attacks.

In a separate project last year, CashNetUSA commissioned NeoMam Studios to create digital renderings of a host of jaw-dropping monuments across the U.S. that were never built.