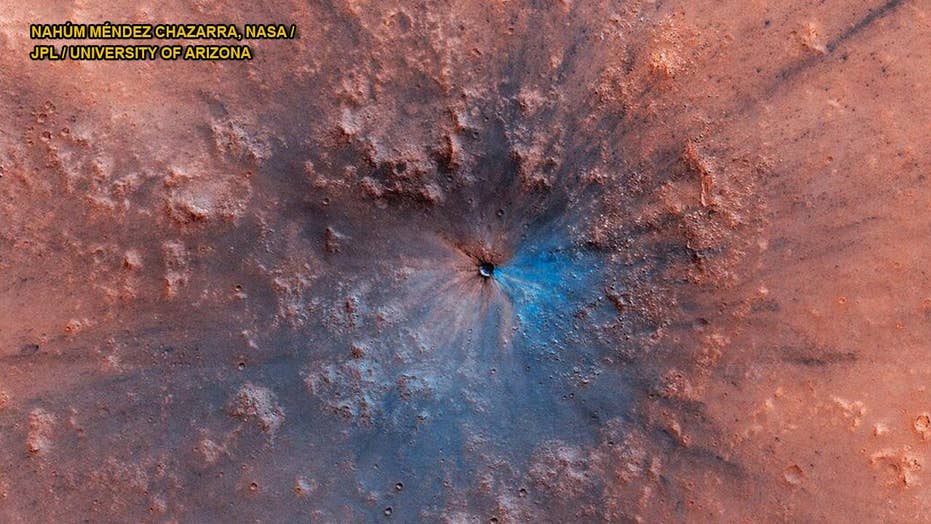 A brand new impact crater has been discovered on the Red Planet Mars, exposing a 'darker material' underneath the reddish dust covering Mars' surface which has scientists stumped. The crater is a result of an asteroid hitting Mars sometime within the past three years. It's unclear exactly when the impact occurred, but the best guess is that the impact crater formed between September 2016 and February 2019.

The Red Planet was hit by an asteroid sometime within the past three years and the resulting crater has exposed a "darker material" underneath Mars' reddish dust that is currently perplexing scientists.

The image was captured by the High-Resolution Imaging Science Experiment (HiRISE) camera on NASA's Mars Reconnaissance Orbiter on April 17, 2019. The black-and-blue area on the Martian landscape highlights the area that was hit.

University of Arizona scientist Veronica Bray told Space.com that the crater was on the larger side of ones she has observed and was a fairly rare event, as MRO has been continuously observing Mars for 13 years.

"It is a reminder of what's out there," she told the news outlet. "It's a gorgeous [crater]. I'm glad I got it in the color strip."

The blueish tint seen in the image may be exposed ice, though Bray and her fellow researchers are not sure exactly what it is and further research is needed.

Peter Grindrod, a research leader in Planetary Science at the Natural History Museum in London, tweeted this gif showing the before and after images.

Researchers suspect that the asteroid was no more than 5 feet wide and likely would've broken up had it entered Earth's atmosphere. But because Mars' atmosphere is significantly weaker than Earth's, it had a better chance of leaving an impact crater.

It's unclear exactly when the impact occurred, but the best guess is that the impact crater formed between September 2016 and February 2019.

NASA's exploration of space and in particular, the MRO, have been in the spotlight in recent weeks. A tweet from President Trump caused confusion earlier this month when he said "NASA should NOT be talking about going to the Moon," but rather it should be "be focused on the much bigger things we are doing, including Mars (of which the Moon is a part), Defense and Science."

Under the direction of the Trump administration, astronauts will return to the Moon by 2024.

NASA Administrator Jim Bridenstine attempted to downplay the confusion, noting that NASA was using the Moon as a gateway to Mars.

And just last week, the University of Arizona, which operates the HiRISE camera, released a picture the MRO took on Mars of a dune that looks strikingly similar to the Starfleet logo on "Star Trek."