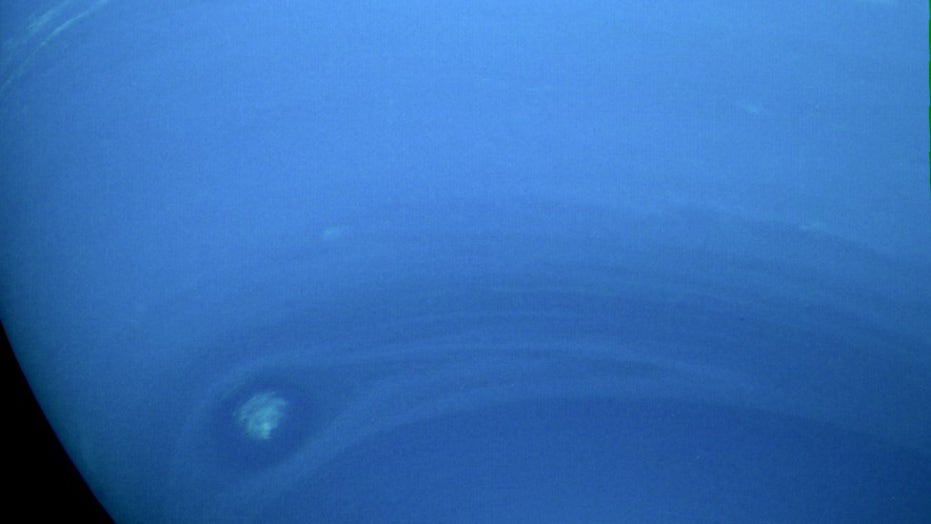 Neptune may be one of the more mysterious planets in the Solar System, but a new study notes that two of its moons, Naiad and Thalassa, are locked in a "dance of avoidance."

The research, which can be read on the arXiv repository, notes that the two celestial satellites are only separated by approximately 1,150 miles, but they never get within 2,200 miles of one another, orbiting at slightly different speeds. Naiad also moves in a "zigzag pattern," whereas Thalassa does not.

"We refer to this repeating pattern as a resonance," said the study's lead author, Marina Brozovic, an expert in solar system dynamics at NASA's Jet Propulsion Laboratory, in a statement. "There are many different types of 'dances' that planets, moons and asteroids can follow, but this one has never been seen before."

Neptune Moon Dance: This animation illustrates how the odd orbits of Neptune's inner moons Naiad and Thalassa enable them to avoid each other as they race around the planet. (Credit: NASA)

NASA AIMS TO PROBE MYSTERIOUS ATMOSPHERES OF URANUS AND NEPTUNE

The pattern never changes, as Naiad takes around seven hours to orbit the icy giant planet and Thalassa takes approximately seven and a half hours.

It's unclear how this pattern started, but Brozovic believes it may have occurred when their original pattern was disrupted after Neptune captured its largest moon, Triton, eons ago.

"We suspect that Naiad was kicked into its tilted orbit by an earlier interaction with one of Neptune's other inner moons," Brozovic added in the statement. "Only later, after its orbital tilt was established, could Naiad settle into this unusual resonance with Thalassa."

Nearly 30 years after a NASA spacecraft visited the farthest planets in our solar system, Uranus and Neptune, the space agency is looking to go back.

NASA’s Voyager 2 spacecraft gave humanity its first glimpse of Neptune and its moon, Triton, in the summer of 1989. This image, taken at a range of 4.4 million miles from the planet, shows the Great Dark Spot and its companion bright smudge. These clouds were seen to persist for as long as Voyager’s cameras could resolve them. (Credit: NASA)

In April, a NASA scientist and his team at the Goddard Space Flight Center in Greenbelt, Md. said they were dreaming up new instruments that could potentially explore the atmosphere of both planets, utilizing advancements in technology over the past 30 years.

Uranus and Neptune are relatively unexplored, the space agency added at the time, despite the fact that Voyager 2 snapped photos of both planets in 1986 and 1989, respectively.

In March, scientists at NASA JPL proposed a mission that would explore Neptune's largest moon, Triton, which some have theorized could have an ocean hiding underneath its surface.