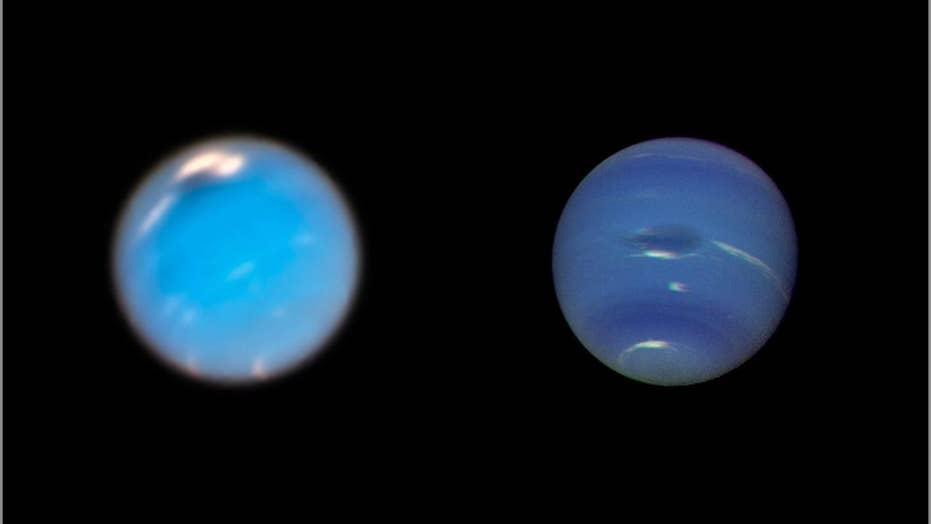 The Hubble Space Telescope captures the birth of one of Neptune's ‘Great Dark Spot’ storms. Astronomers started to study a storm on the eighth planet from the Sun in 2015 when they spotted white clouds forming, then in 2018, a dark storm was spotted where the white clouds had been forming.

Jupiter may be known for its Great Red Spot, but the Hubble Space Telescope has captured another planetary anomaly in the depths of space — the birth of one of Neptune's "Great Dark Spot" storms.

Astronomers started to study a storm on the eighth planet from the Sun in 2015 when they spotted white clouds forming. Three years later, a dark storm was spotted where the white clouds had been forming, the researchers noted.

“We were so busy tracking this smaller storm from 2015, that we weren’t necessarily expecting to see another big one so soon,” Amy Simon, a planetary scientist at NASA’s Goddard Space Flight Center in Greenbelt, Md., said in a statement.

“It was certainly a surprise,” Simon added. “We were used to looking at Jupiter’s Great Red Spot, which presumably had been there for more than 100 years.”

The findings were published in the scientific journal Geophysical Research Letters.

Researchers have observed six "Great Dark Spots" on Neptune going back nearly 30 years, according to the study. It's possible that each storm lasts up to six years, though the study suggests that two-year lifespans are "more likely."

The first two storms were captured by the Voyager 2 probe in 1989, with Hubble capturing the other four.

Continued study of these storms will give researchers new insight into the planet's atmosphere, how the storms form and where they originate.

"A search of global Hubble Neptune images from 2015 through 2017 reveals smaller clouds present at locations consistent with this storm, meaning, it may take many years to form. If so, it may originate from much deeper in the atmosphere than previously thought," the researchers wrote in a plain language summary of the study.