Here are all the mysterious sea creatures that washed ashore in 2018.

Beachgoers across the world discovered stunning sea creatures this year — as strong currents and storms pushed them to the surface.

In Texas, a fish that typically swims in waters as deep as 1,200 feet was found lifeless on the sand in Corpus Christi. New Zealand residents spotted a bright pink creature that turned out to be the largest species of jellyfish in the world during a family outing. And that's just the beginning.

Photos and videos of various unique ocean finds were shared online, and (no surprise) quickly went viral. Some were considered local treasures, while others were studied and examined by marine experts to help them better understand rare species.

Here's a look at some of the most puzzling sea creatures that washed up in 2018.

A giant hairy sea creature washed up in the Phillipines in May, causing locals to flock to the San Antonio beach to snap pictures of the mysterious "blob" many dubbed a "globster."

The carcass of the animal measured about 20 feet long, according to The Sun. A video of the massive greyish white creature posted to YouTube showed two men with ropes working together to pull the monster out of the water.

Fishery Law Enforcement Officer Vox Krusada told the British newspaper that — based on the size and shape of the creature, and what marine experts observed — officials could confirm it was the body of a whale.

An odd-looking fish that lives on the ocean floor shocked Texas park rangers when it washed up on Padre Island National Seashore in Corpus Christi in June.

Photographer Edie Bresler was scanning the beach for hidden treasures when he spotted the big-eyed fish. With its bumpy skin and wide mouth, Bresler wasn't exactly sure what he was looking at. So, he quickly took out his camera and started snapping.

"I have been beach combing all my life so to come across something strange like this was totally exciting," Bresler explained in a Facebook post. "It got even better when I took the photographs to the park rangers and they were equally baffled."

Bresler sent his photos to officials at Padre Island National Seashore. After carefully studying the creature and comparing images of the fish to various science books, they determined it was a thick-tailed batfish.

"These fish come from 600-1200 feet (180-365 meters) deep, where ocean life gets WEIRD," the park explained. "Batfish use their pectoral, or side-fins, as 'legs' to 'crawl' on the seafloor to feed on worms, and small crustaceans and fish. They live their lives in complete darkness, where large eyes probably come in handy to avoid lanternfish or other possible predators." 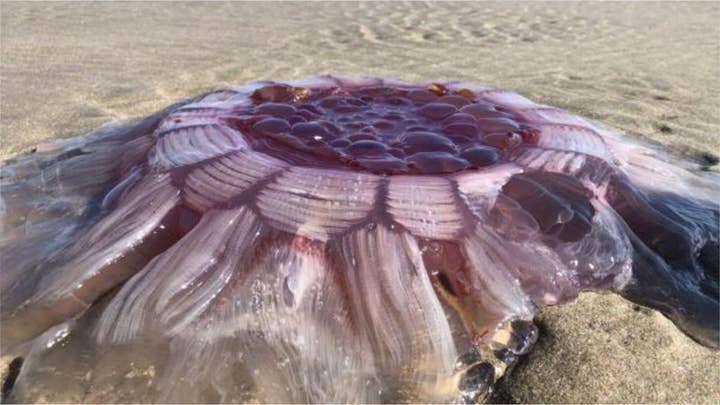 It was first spotted by local Adam Dickinson, who instructed his children not to touch it.

"My initial thought was don't let my kids touch it as they went running up to have a look," Dickinson, who lives in Stanmore Bay, recalled to Fox News.

Dickinson's children compared the pink creature to a "volcano."

He later discovered the mystery creature was a lion's mane jellyfish — and it was still alive.

A lion's mane jellyfish, also known as the "giant jellyfish," can grow as large as a blue whale. Its tentacles can reach 190 feet long and it can have a bell diameter of up to 7 feet, according to Oceana, an international conservation organization.

New Jersey beaches were littered with "blue button jellyfish," a disc-shaped, free-floating organism that typically measures about 1-inch in diameter, in October.

“They were so vibrant, it was unreal so I couldn’t help but stop and take notice," said Suzanne Schenker, who was walking along the coast of Beach Haven when she spotted a pair of the jellyfish, told WCBS-TV.

Schenker posted photos of the round creatures on "New Jersey Jellyspotters," a Facebook group with roughly 800 members.

"It's the first time I've ever seen one in New Jersey," Bologna told NJ Advance Media, explaining they were likely blown in from the Gulf Stream. "I've seen them in Florida but never this area. They are beautiful and stunning." 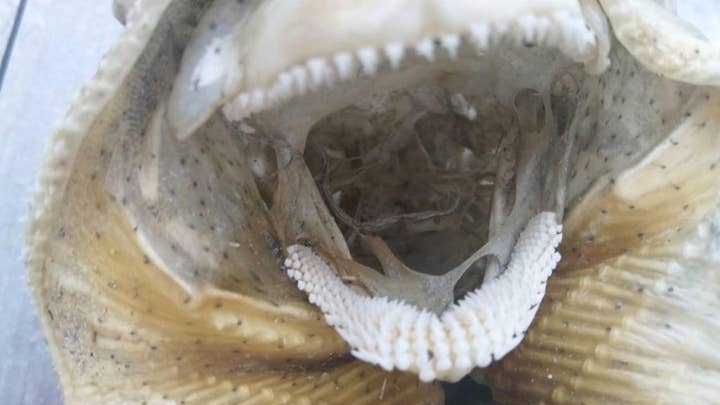 After a rough storm hit Canterbury, New Zealand, in late November, piles of "rubbish" washed ashore. But one plastic-looking sheet turned out not to be trash after all.

Local Hanna Mary discovered the sea creature at a Rakaia Huts beach, shrieking after she realized it wasn't just another piece of trash — it was the skeleton of an alien-like critter.

"When I pulled it out and saw all the teeth and barbs I was convinced it was a rare deep-sea creature," Mary told Fox News. "I was so excited because I love the ocean and its inhabitants."

Malcolm Francis, a fisheries scientist and marine ecologist at National Institute of Water and Atmospheric Research (NIWA), told the New Zealand Herald the creature was a New Zealand rough skate.

"They are called rough skate because they are very prickly ... it's quite common in Canterbury," Francis, who has been studying fish for more than 40 years, told the newspaper. "It's like flat shark, it has a skeleton made out of cartilage. They spend much of their time on the bottom."

New Zealand rough skates can grow up to nearly 3 feet and typically swim about 700 feet below the ocean's surface, according to Talley's Group, a New Zealand-based agribusiness company. The company noted the species is "considered a delicacy" in the country. 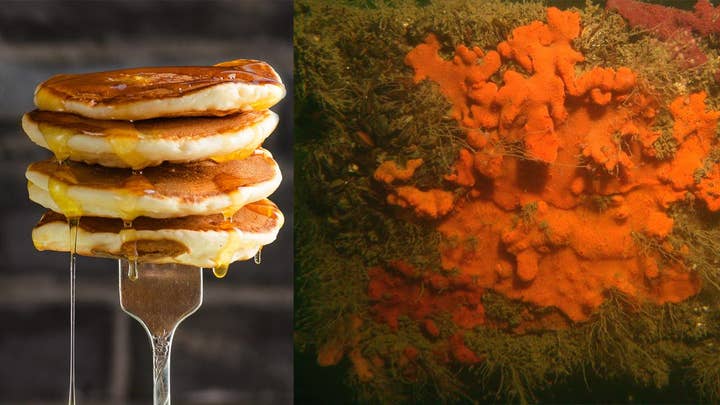 Sea squirts were spotted off the coast of Maine in November.

The population of the jelly-like marine invertebrate animals — also known as tunicates — has grown rapidly in recent years, and they're starting to wipe out other organisms that are vital to the ocean's ecosystem, researchers in the area warned.

“They are having a banner year this year. They are out there competing with the seaweeds and [other organisms] on the bottom," Larry Harris, a zoology professor at UNH, told the Bangor Daily News on Nov. 15.

Sea squirts are 2-inch-long organisms that tend to live in clumps, sticking to coral reefs, seaweed and other objects found near the ocean floor, the Chesapeake Bay Program states online. They got their nickname because of the way they feed — they suck in water through one of their siphons, filter in the food particles and then eject waste back out through another siphon.