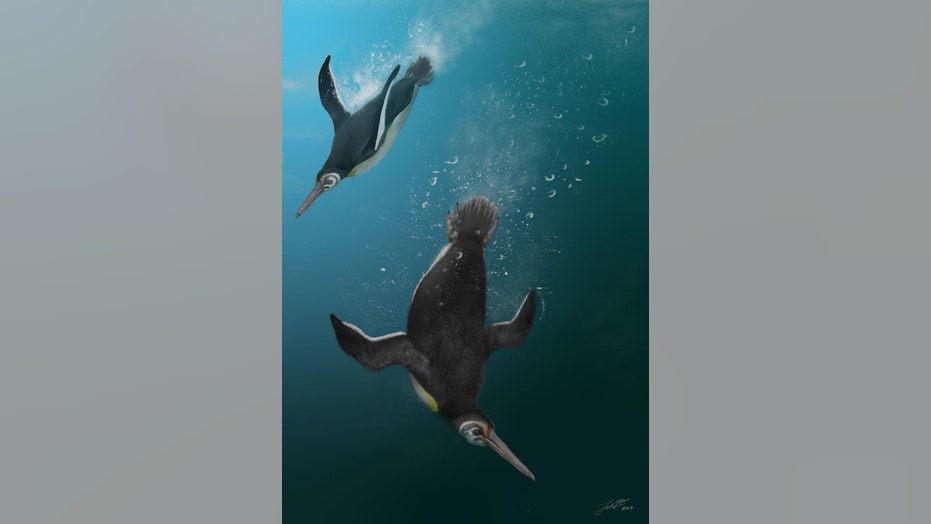 Researchers have discovered "missing link" penguin fossils that suggest the enormous birds gave up flying and took to the seas after the dinosaurs were wiped out by a massive asteroid.

The newly discovered species, known as Kupoupou stilwelli, was discovered on Chatham Island, New Zealand. It was approximately 3 feet, 7 inches tall, similar in size to the modern-day King Penguin and may have walked next to recently discovered giant penguins that stood nearly 5 feet and weighed up to 176 pounds.

"Next to its colossal human-sized cousins, including the recently described monster penguin Crossvallia waiparensis, Kupoupou was comparatively small - no bigger than modern King Penguins which stand just under 1.1 meters tall," said Flinders University doctoral paleontology candidate and University of Canterbury graduate Jacob Blokland in a statement.

"Kupoupou also had proportionally shorter legs than some other early fossil penguins," Blokland added. "In this respect, it was more like the penguins of today, meaning it would have waddled on land. This penguin is the first that has modern proportions both in terms of its size and in its hind limb and foot bones (the tarsometatarsus) or foot shape."

Blokland first discovered the fossils between 2006 and 2011 after they were collected from Chatham Island, 500 miles off the east coast of New Zealand's South Island.

The study's co-author, Paul Scofield, noted that "it's not impossible" for penguins to have lost the ability to fly and gain the ability to swim after the traumatic extinction event 66 million years ago. "If we ever find a penguin fossil from the Cretaceous period, we will know for sure," he added.

Scofield added that the research gives additional support that penguins evolved rapidly in the period after dinosaurs became extinct, more than 60 million years ago.

"We think it's likely that the ancestors of penguins diverged from the lineage leading to their closest living relatives - such as albatross and petrels - during the Late Cretaceous period, and then many different species sprang up after the dinosaurs were wiped out," Scofield noted.

Scofield is also responsible for the discovery of the aforementioned giant penguin, known as Crossvallia waiparensis. It lived in the Paleocene Epoch between 66 million and 56 million years ago, according to the Canterbury Museum.

The research was published in the scientific journal Palaeontologia Electronica.