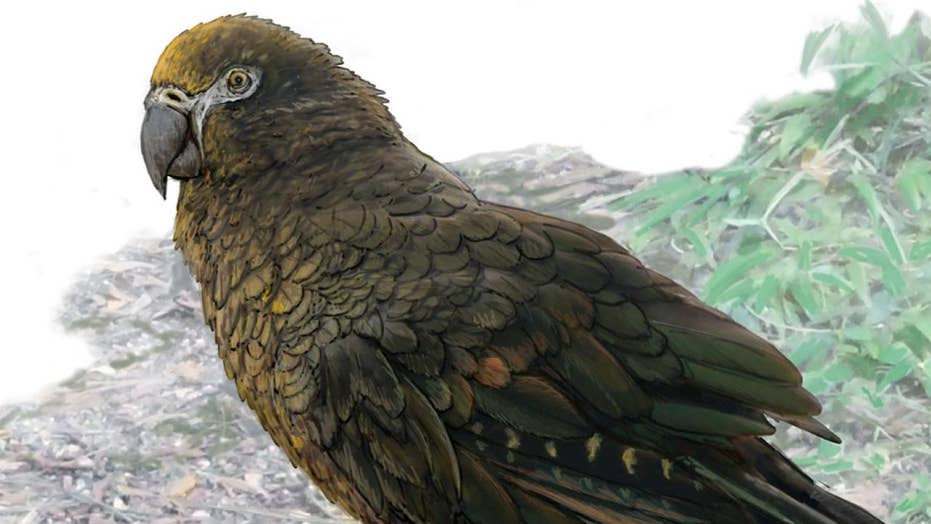 Nineteen million-year-old fossils of a giant parrot that ate members of its own species have been found in New Zealand. Standing up to 3 feet in height, researchers have dubbed the astronomical avian "Squawkzilla."

"Heracles, as the largest parrot ever, no doubt with a massive parrot beak that could crack wide open anything it fancied, may well have dined on more than conventional parrot foods, perhaps even other parrots," said the study's co-author, professor Mike Archer in a statement.

"Its rarity in the deposit is something we might expect if it was feeding higher up in the food chain," Archer continued, adding parrots "in general are very resourceful birds in terms of culinary interests."

The study's lead author, Flinders University associate professor Trevor Worthy, said New Zealand is "well known for its giant birds," including certain species of geese, eagles and others, but this is a rather unusual discovery.

The study describing the find was published in the journal Biology Letters.

The fossils were found in Central Otago, New Zealand, near St. Bathans, an area that is rich with bird fossils from millions of years ago, stemming from the Early Miocene period.

"We have been excavating these fossil deposits for 20 years, and each year reveals new birds and other animals," Worthy said.

Paul Scofield, Senior Curator at Canterbury Museum, Christchurch, said the fauna of the St. Bathans gives insight into the "terrestrial birds and other animals that lived in New Zealand since dinosaurs roamed the land more than 66 million years ago."

Although Heracles inexpectatus was by far the world's largest parrot, it's not uncommon for other birds to approach and even surpass Heracles inexpectatus in size, including the now-extinct dodo and the  kea, a parrot that is nearly 18 inches tall and is found in New Zealand's South Island. Other giant birds, including pigeons, storks and ducks, have been found on islands such as Fiji, Flores and Hawaii.

Worthy believes the region, which was once a shallow lake surrounded by grassy wetlands, is home to more incredible finds like "Squawkzilla."

"While Heracles is one of the most spectacular birds we have found, no doubt there are many more unexpected species yet to be discovered in this most interesting deposit," Worthy said.