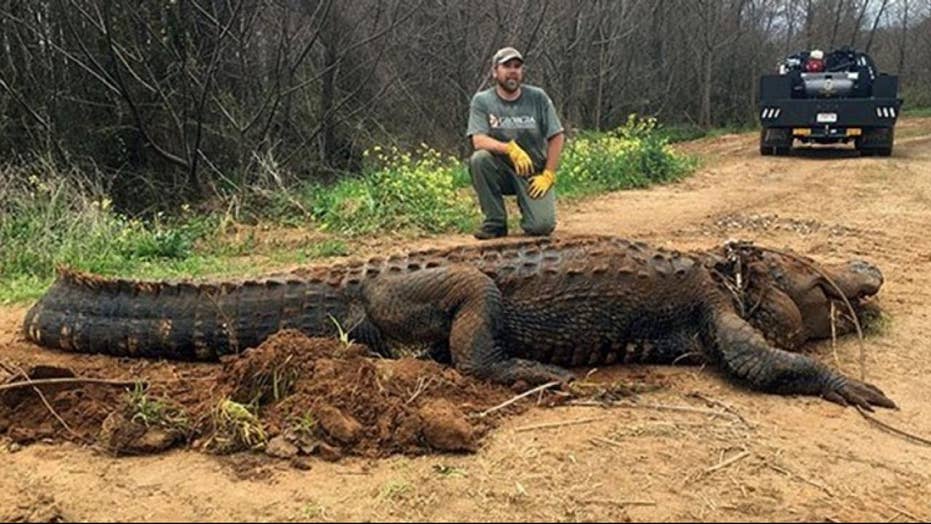 A massive 13 foot, 700-pound alligator was discovered in a Georgia irrigation ditch.

A roughly 13-foot, 700-pound alligator was recently found in an irrigation ditch, officials with the Georgia Department of Natural Resources said this week.

The massive reptile was found in the ditch near Lake Blackshear, Melissa Cummings, a spokeswoman for the Georgia DNR, told Fox News on Saturday.

“It’s a testament to Georgia’s alligator-management program that alligators can grow to this size,” she said, separately telling First Coast News that "the only way these animals get this large is by avoiding humans."

The animal’s size apparently led many who saw its picture on social media to think the image was a “hoax.” But Brent Howze, the wildlife biologist who is seen crouching behind the reptile in the photo, said otherwise.

“Apparently a lot of people think it’s fake, but I can assure you that it is not,” he told the Cordele Dispatch. “I’m the one in the picture, and you can probably tell that I didn’t get too close to it.”

"The only way these animals get this large is by avoiding humans.”

Howze said he reported to the area where the gator was located after a local Sumter County resident spotted it in the ditch on Monday morning.

“It took a while to get it out of that ditch. It was bigger than we originally anticipated, and we had to use heavy equipment to move it,” Howze told the newspaper.

"Brent estimated that the animal had been in the irrigation ditch for close to a week, which is very unusual behavior," Cummings added to Fox News.

After the gator was removed from the ditch, it appeared to have old gunshot wounds on its body and was determined to be in poor health, Cummings said. It was ultimately euthanized.