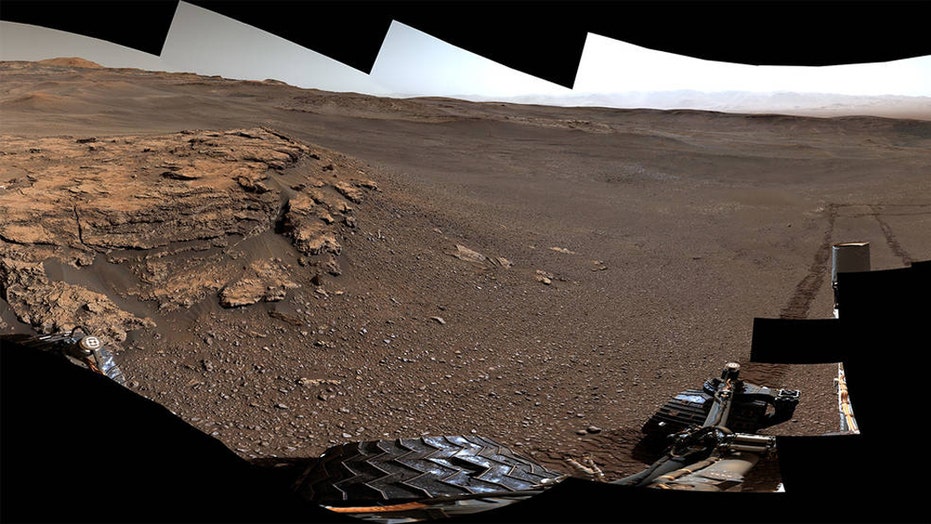 NASA's eventual goal is to put astronauts on Mars, but the space agency's Curiosity rover is keeping it busy in the meantime.

The Curiosity rover, which celebrated its seventh anniversary on the Red Planet earlier this week, has made several remarkable discoveries, including finding "unusually high" levels of methane and a "shiny" object believed to be a meteorite. In a new blog post, NASA said that Curiosity is still exploring the Gale Crater and uncovering the mysteries of the "clay-bearing unit," where it's using its tools to drill into the Martian soil.

"This area is one of the reasons we came to Gale Crater," said Kristen Bennett of the U.S. Geological Survey, one of the co-leads for Curiosity's clay-unit campaign, in the post. "We've been studying orbiter images of this area for 10 years, and we're finally able to take a look up close."


This panorama of a location called "Teal Ridge" was captured on Mars by the Mast Camera, or Mastcam, on NASA's Curiosity rover on June 18, 2019, the 2,440th Martian day, or sol, of the mission. (Credit: NASA/JPL-Caltech/MSSS)

The clay was first spotted by NASA's Mars Reconnaissance Orbiter (MRO), prior to the launch of Curiosity. Clay is partially made with water, which is the basis for supporting life as know it.

Curiosity has found "the highest amounts of clay minerals" in some recent rock samples it's looked at. The rover also found high amounts of clay on other parts of Mount Sharp, a mountain on Mars, which the MRO did not detect.

NASA added that scientists are wondering what caused the discrepancy between the MRO and Curiosity's findings. One possible reason is that pebbles and gravels that were encountered by Curiosity were too small for the MRO to see, according to the campaign's co-lead, Valerie Fox of Caltech.

The space agency has also posted a video to YouTube detailing Curiosity's achievements.

However, former astronauts, including Apollo 11 astronaut Michael Collins, think we should skip a return mission to the Moon, slated for 2024, and "shoot directly for Mars."