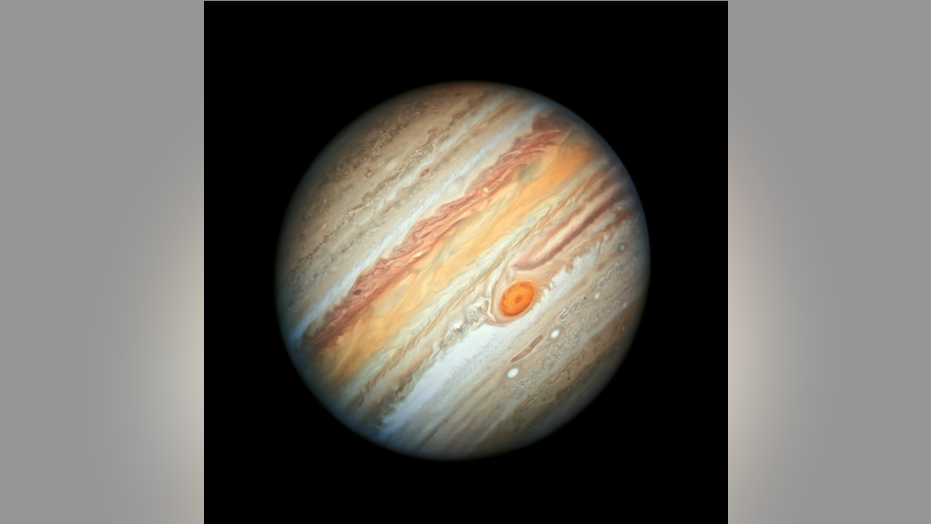 Having been continuously observed since 1830, Jupiter's Great Red Spot (GRS) has fascinated researchers. But despite recent reports that the clouds involved are shrinking, the storm continues to be exceptionally strong, according to a new study.

Researchers from the University of California, Berkeley spoke at a conference held by the American Physical Society's Division of Fluid Dynamics and said there is no evidence the vortex that causes cloud formation has changed in size or strength.

"I don't think its fortunes were ever bad," University of California, Berkely professor Philip Marcus said in a statement. "It's more like Mark Twain's comment: The reports about its death have been greatly exaggerated."

A (false color) series of images capturing the repeated flaking of red clouds from the GRS in the Spring of 2019. In the earliest image, the flaking is predominant on the east side of the giant red vortex. The flake then breaks off from the GRS, but a new flake starts to detach in the fifth image. (Credit: Chris Go)

Earlier this year, amateur astronomers said they spotted "blades" and "flakes" spinning off from the Great Red Spot, causing speculation that the system itself was getting smaller.

Since astronomers are not actually able to see the storm itself, and only the clouds, Marcus noted that the "flakes" could be due to storms interacting, rather than a weakening of the storm itself.

In September, astronomers observed storms made of ammonia and water vapor that are disrupting the planet's belts.

Jupiter continues to be a source of fascination for astronomers, with NASA's Juno probe continuously orbiting the celestial giant since 2016. In August, a study suggested it may have had a massive collision with a "still-forming planet" approximately 4.5 billion years ago.

Two of Jupiter's 79 known moons, Europa and Io, are also a source of intense interest for researchers. In August, NASA said it would explore Europa, an icy celestial body that could be habitable for humans and support life, as soon as 2023.

A massive volcano on Io, Loki Patera, a 125-mile-wide lava lake, is getting ready to erupt imminently, researchers said in September.