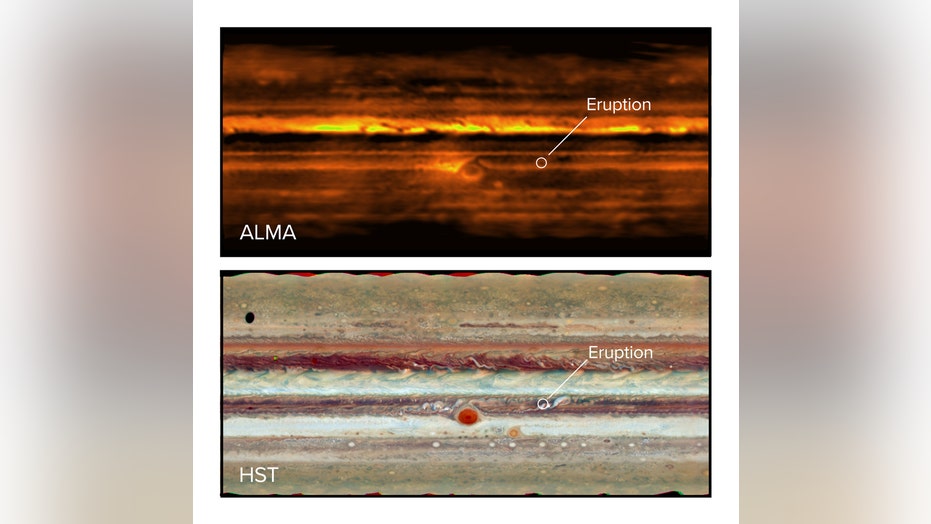 Jupiter, the largest planet in the solar system, is perhaps most famous for its giant Red Spot, a continuous storm that has been observed since 1830. But now, new powerful storms have started on the gas giant and they are disrupting the planet's belts.

These storms are affecting the planet's white and brown belts, creating distortion among the bands, which are usually separated. Made of ammonia and water vapor, the storms are rising through Jupiter's cloud layer and then being condensed into white plumes.

"If these plumes are vigorous and continue to have convective events, they may disturb one of these entire bands over time, though it may take a few months," said the study's lead author, Imke de Pater, in a statement. "With these observations, we see one plume in progress and the aftereffects of the others."

The study, which is awaiting publication in The Astronomical Journal, can be found here.

The researchers were able to identify the storms using the Atacama Large Millimeter/Submillimeter Array (ALMA), as well as the Hubble Space Telescope.

"Our ALMA observations are the first to show that high concentrations of ammonia gas are brought up during an energetic eruption," de Pater added.

JUPITER COLLIDED WITH STILL-FORMING PLANET 4.5B YEARS AGO: 'ONE IN A TRILLION PROBABILITY'

Usually, the ammonia clouds are the top thin layer of both the brown and white clouds that make up Jupiter's bands. But since the ammonia does not rise higher than the hydrogen and helium that make up the planet's atmosphere, it's difficult to know what is causing these storms, the researchers noted.

"We were really lucky with these data, because they were taken just a few days after amateur astronomers found a bright plume in the South Equatorial Belt," de Pater continued. "With ALMA, we observed the whole planet and saw that plume, and since ALMA probes below the cloud layers, we could actually see what was going on below the ammonia clouds."