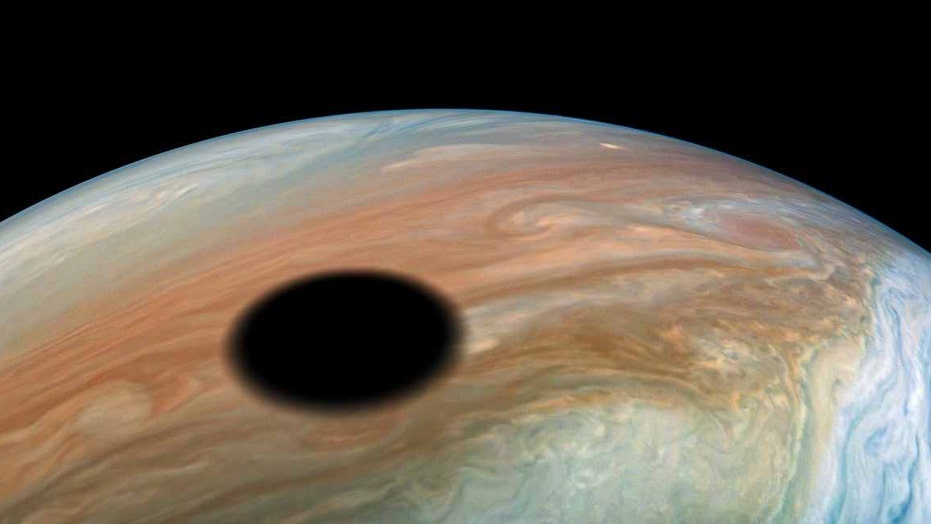 NASA’s Juno spacecraft has spotted a giant black spot on Jupiter that stretched 2,200 miles across the surface of the gas planet.

On its website, NASA explains that there is a straightforward explanation for the somewhat sinister-looking spot. The mark is simply the shadow of Jupiter’s moon, Io.

“Such events occur frequently on Jupiter because it is a large planet with many moons,” explained NASA. “In addition, unlike most other planets in our solar system, Jupiter’s axis is not highly tilted relative to its orbit, so the Sun never strays far from Jupiter’s equatorial plane (+/- 3 degrees). This means Jupiter’s moons regularly cast their shadows on the planet throughout its year.”

Jupiter has 53 named moons and 26 that are yet to receive official names, according to the space agency.

The giant black spot on the surface of Jupiter. (Image data: NASA/JPL-Caltech/SwRI/MSSS. Image processing by Kevin M. Gill, © CC BY 3.0)

“Juno’s close proximity to Jupiter provides an exceptional fish-eye view, showing a small fraction near the planet’s equator,” added NASA in its statement. “The shadow is about 2,200 miles (3,600 kilometers) wide, approximately the same width as Io, but appears much larger relative to Jupiter.”

The fifth rock from the Sun and the heftiest planet in the solar system, Jupiter is what's known as a gas giant. It's made up of a ball of hydrogen and helium, unlike the rocky composition of Earth and Mars.

The massive planet has a diameter that is more than 11 times larger than Earth’s, according to Caltech, which says that over 1,300 Earths could fit inside Jupiter.

NASA noted that the enhanced-color image of the giant black spot was created by citizen scientist Kevin M. Gill using data from Juno’s JunoCam imager. The image was captured on Sept. 11, 2019, when Juno was about 4,885 miles above Jupiter’s cloud tops.

Jupiter’s moon Io is described by NASA as the most volcanically active body in the solar system.

In a recent research project, scientists reported that Loki Patera, a massive volcano on Io, could erupt imminently.