What's in a name? Well, for the amateur astronomers and scientists fixated on Jupiter, there's been a recent need to describe its iconic storm as more than just a great red spot.

Here on Earth, storms are born and then they disappear. And though it has lingered for hundreds of years, Jupiter's famous vortex may be approaching the end of its life span, too, as strange as that may seem.

The Great Red Spot — GRS for short — is getting smaller. The system was once very elongated, which NASA scientist Glenn Orton joked "might have been better referred to as the Great Red Sausage" in a May 21 email to Space.com. Orton added that the GRS has been shrinking at a pretty consistent rate. Recently, amateur astronomers viewed new formations, "blades" and "flakes," spinning off from the Great Red Spot. Some reports have called it an unraveling — while experts Space.com talked with wouldn't describe this activity that way, it's still very fascinating to watch.

From the Philippines, amateur astronomer Christopher Go observed a reddish extension on the left side of this counterclockwise-spinning storm when photographing Jupiter on Friday (May 17).

To the south, in Australia, amateur astronomer Anthony Wesley captured one of these peculiar shapes coming off the spot two days later on Sunday (May 19), and then again on Wednesday (May 22).

As they battle terrestrial weather conditions to keep an eye on the spot's changes from Earth, NASA's Juno mission studies it up close from orbit. The spacecraft arrived at Jupiter in July 2016, and is currently in its 19th perijove, or the point in the satellite's orbit nearest to Jupiter's center. Imagery from Juno's 17th and 18th observational flybys also show some of these flaky formations.

The red flakes lasted for more than a week. This is according to an emailed report by John Rogers of the British Astronomical Association, a network for amateur astronomers, from May 15. Scientists with Juno are preparing to study other aspects of the Great Red Spot when the probe flies over it again in July 2019.

But the mission has noticed these blade formations in the past. Orton told Space.com that Juno "observations sensitive to upper-level hazes have detected high-altitude 'flakes' or 'blades' detaching from the western side of the GRS," adding that this was a rare phenomenon up until 2017.

"Some observers implied that these [blades] were induced by the arrival of vortices in a jet just south of the GRS moving from east to west that enter a dark area surrounding it that is characterized by deeper clouds, known as the 'Red Spot Hollow,'" Orton said. "Stay tuned, as the dark region around the GRS is growing in length, and we'll see what happens next." 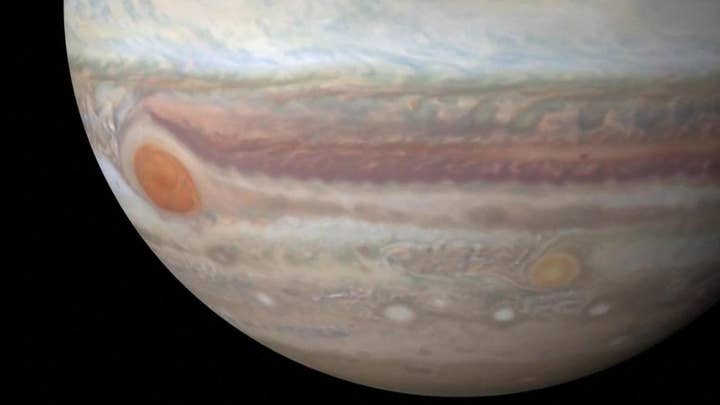 You can watch an animation of Jupiter's GRS changes made by Shinji Mizumoto for the Association of Lunar and Planetary Observers in Japan here.

For now, Juno is focused on what's happening deeper within the GRS. One of Juno's instruments, the Microwave Radiometer, found that GRS "lasts as far down in the atmosphere as the MWR can detect," Orton said. So when Juno flies over it in July, priority will be given to the "gravity-sensing capability of the mission" that can give scientists a better idea about how far down Jupiter's famous beauty mark goes.

While it's not clear what these blades may mean about the Great Red Spot's longevity, the spot could be gone in 20 years. In a February 2018 interview with Business Insider, Orton said the GRS "will in a decade or two become the GRC (Great Red Circle)… maybe sometime after that, the GRM [Great Red Memory]."