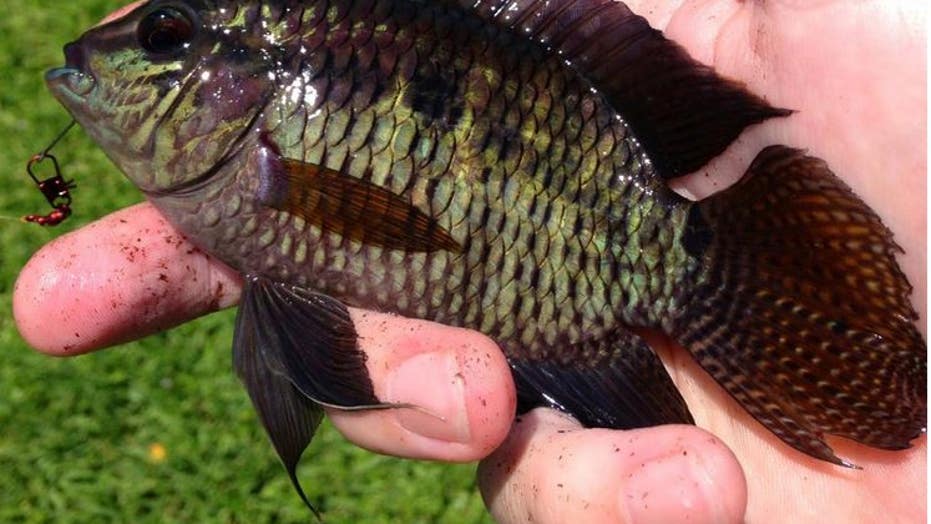 The chanchita, a South American freshwater fish that's been seen in Florida's waters for 20 years, has been identified by scientists as a different invader known as the black acara.

“Even the professionals get it wrong,” Robert Robins, Florida Museum of Natural History ichthyology collection manager, said in a statement. “The chanchita has been right here, right under our noses. It’s spread into seven different counties and five different river drainages in Florida, well beyond the Tampa Bay drainage where it appears to have been first introduced.”

UNUSUAL ROMAN-ERA GRAVES FOUND IN THE UK BY ARCHAEOLOGISTS

The chanchita is a subtropical species native to southern South America. For 20 years, it has also made its home in Central Florida waters. (Ryan Crutchfield/FishMap.org)

According to the Florida Museum, the black acara has been around primarily in South Florida since the 1950s, and when a similar fish appeared in the water of North Tampa Bay around 2000, scientists assumed it was the same fish.

Mary Brown, a biologist who studies non-native fishes, realized that something was not adding up.

“The body color and the pattern on the scales on its head just looked a little different,” Brown, a scientist at the U.S. Geological Survey Wetland and Aquatic Research Center, explained in a statement. “It wasn’t the same as the black acara I’ve come across while conducting non-native fish surveys in South Florida.”

In addition, Ryan Crutchfield, founder of the fish identification database FishMap.org, was hearing from amateur collectors that he'd misidentified a fish as a black acara for an article on the history of the species in Florida.

The black acara, Cichlasoma bimaculatum, has been a well-established invasive freshwater fish in South Florida since the 1950s. (Robert Robins/Florida Museum)

"When we started going out into the field and collecting them and actually finding them in breeding condition or as dominant males, they're stunningly beautiful," Robins said. "I think that's what the amateur community was keying in on. They're the ones detecting life color, and that was really instructive in determining this was a different species."