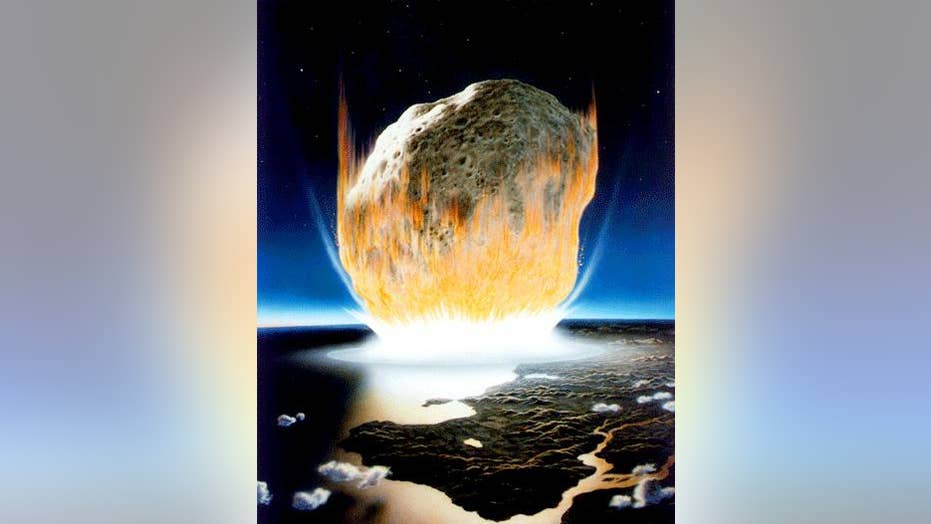 Scientists have unveiled stunning new research that sheds light on the 24 hours that followed the asteroid impact that wiped out the dinosaurs.

The asteroid strike 66 million years ago has been compared to the power of 10 billion atomic bombs.

An international team of scientists led by the University of Texas at Austin examined hundreds of feet of rocks that filled the Chicxulub impact crater within the first 24 hours after impact. The Chicxulub crater is located offshore from Mexico’s Yucatan Peninsula.

Scientists explain that the asteroid sparked wildfires, triggered tsunamis and launched sulfur into the atmosphere, blocking out the Sun.

The asteroid strike is described as a “short-lived” regional inferno followed by a global cooling that killed off the dinosaurs.

"We fried them and then we froze them," said Sean Gulick, a research professor at the University of Texas Institute for Geophysics (UTIG) at the Jackson School of Geosciences, in a statement. "Not all the dinosaurs died that day, but many dinosaurs did."

T. REX HAD AN 'AIR CONDITIONER' IN ITS HEAD, STUDY SAYS

Charcoal and pieces of rock from the ensuing tsunami’s backflow were discovered, although sulfur was notably absent, according to researchers. The absence of sulfur indicates that the asteroid impact “vaporized” rocks forming sulfate aerosols in the atmosphere, according to the scientists.

A portion of the drilled cores from the rocks that filled the crater left by the asteroid impact that wiped out the dinosaurs. (International Ocean Discovery Program)

“The real killer has got to be atmospheric,” Gulick said in the statement. “The only way you get a global mass extinction like this is an atmospheric effect.”

Gulick describes the research as “an expanded record of events” recovered from within the “ground zero” of the asteroid impact site.

“Most of the material that filled the crater within hours of impact was produced at the impact site or was swept in by seawater pouring back into the crater from the surrounding Gulf of Mexico,” the researchers explained. “Just one day deposited about 425 feet of material — a rate that’s among the highest ever encountered in the geologic record.”

Charcoal and a chemical biomarker linked to soil fungi were also found within or above layers of sand in the impact crater. “This suggests that the charred landscape was pulled into the crater with the receding waters of the tsunami,” the researchers noted.

The study is published in the journal Proceedings of the National Academy of Sciences.

Paleontologists continue to make stunning dinosaur discoveries around the world. Recently they discovered the fossilized remains of a herd of dinosaurs in an opal mine in the Australian outback.

The fossils were found in the mine near Lightning Ridge, New South Wales, and include a new dinosaur species as well as the world’s most complete opalized dino, according to experts.

In another project, paleontologists discovered a new spike-armored dinosaur in Texas. Paleontologists in Canada have also touted the discovery of the world’s largest Tyrannosaurus rex.