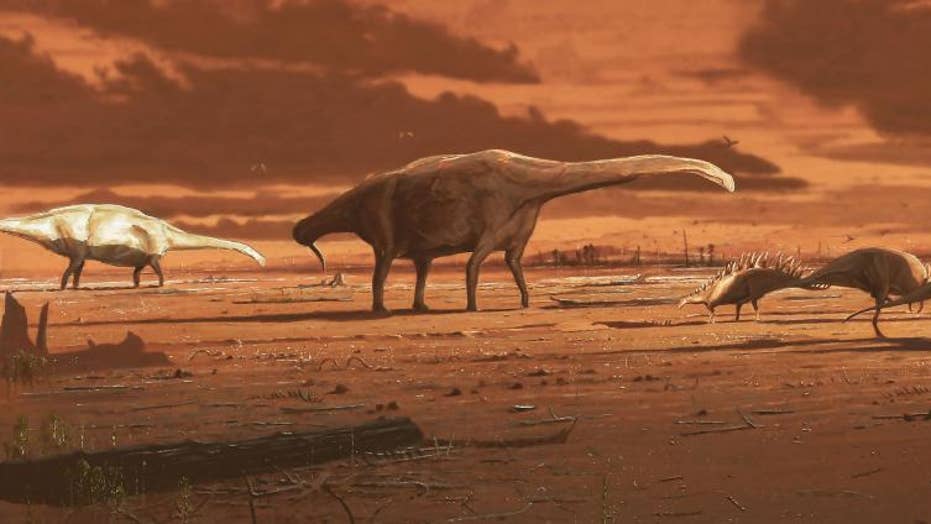 Experts have discovered a ‘dinosaur stomping ground’ on the Isle of Skye off the northwest coast of Scotland.

Artists' illustration of dinosaurs on the Isle of Skye. (Jon Hoad)

The paleontologists’ research is revealed in a paper published in the journal Plos One.

“Thrilled to announce our latest dinosaur discovery from the Isle of Skye in Scotland: two new Jurassic-aged tracksites, with dozens of tracks, some made by dinosaurs we didn't know lived here!,” tweeted Brusatte, who is also an author of the research paper.

Around 50 dinosaur footprints that date to the Middle Jurassic Period were found on ancient coastal mudflats. The tracks, which are of a type called Deltapodus, were likely caused by a stegosaurian or “plate-backed” dinosaur. The Deltapodus tracks are the oldest known, according to the researchers.

"These new tracksites give us a much clearer picture of the dinosaurs that lived in Scotland 170 million years ago,” said Brusatte in a statement. “We knew there were giant long-necked sauropods and jeep-sized carnivores, but we can now add plate-backed stegosaurs to that roster, and maybe even primitive cousins of the duck-billed dinosaurs too. These discoveries are making Skye one of the best places in the world for understanding dinosaur evolution in the Middle Jurassic."

Other dinosaur tracks have been garnering attention in recent years. In 2018, for example, paleontologists announced the discovery of an extremely rare 170-million-year-old dinosaur footprint in Scotland.

Also In 2018, an incredible dinosaur path, which even shows the tracks of a baby dinosaur, was discovered at NASA’s Space Flight Center. The tracks of at least 70 mammals and dinosaurs from more than 100 million years ago were found in sandstone on the grounds of the NASA site in Greenbelt, Md.