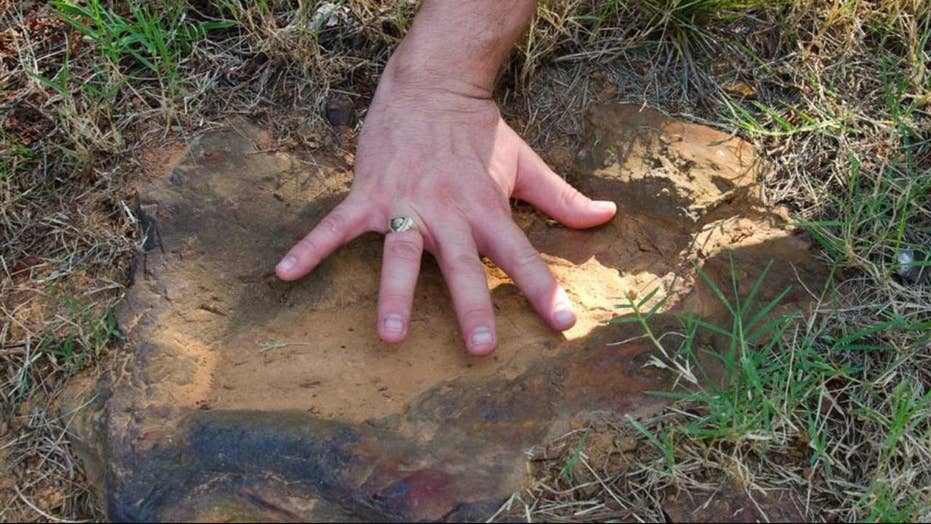 'This is a big deal': Dinosaur tracks found on NASA site

Paleontologists excited by discovery of about 70 tracks from the Cretaceous period.

An incredible dinosaur path, which even shows the tracks of a baby dinosaur, has been discovered at NASA’s Space Flight Center.

The tracks of at least 70 mammals and dinosaurs from more than 100 million years ago were found in sandstone on the grounds of the NASA site in Greenbelt, Md.

The amazing discovery, which was described in the journal Scientific Reports this week, was made in 2012 by Ray Stanford, a local dinosaur expert whose wife Sheila works at the NASA site.  After dropping his wife off at work one day, Stanford noticed a rocky outcrop on the hillside behind her building.

Upon closer inspection, Stanford found a 12-inch wide dinosaur track. Subsequent analysis of the sandstone slab, which is the size of a dining room table, revealed dozens of tracks from at least eight different species. These range from squirrel-sized mammals to tank-sized dinosaurs, according to a statement released by NASA.

“The concentration of mammal tracks on this site is orders of magnitude higher than any other site in the world,” said Martin Lockley, a paleontologist with the University of Colorado, Denver, in the statement. “I don't think I've ever seen a slab this size, which is a couple of square meters, where you have over 70 footprints of so many different types. This is the mother lode of Cretaceous mammal tracks.”

The first track identified belonged to a nodasaur, which Stanford compared to a “four-footed tank.” Further analysis showed the print of a baby nodasaur beside and inside the adult print, which may indicate that they were travelling together. Other tracks found include a sauropod, which was a huge dinosaur with a long neck and long tail, small crow-sized theropods that were related to the Velociraptor and pterosaurs, or flying reptiles.

A model of a Nodosaur dinosaur sits inside what is believed to be the fossil of a Nodosaur footprint. The footprint was found by Ray Stanford a local dinosaur hunter. (Credit: NASA/Goddard/Rebecca Roth)

“It’s a time machine,” Stanford explained. “We can look across a few days of activity of these animals and we can picture it. We see the interaction of how they pass in relation to each other. This enables us to look deeply into ancient times on Earth. It’s just tremendously exciting.”

Some 26 mammal tracks were also found on the slab, which was excavated in a project coordinated by Stephen J. Godfrey, curator of paleontology at the Calvert Marine Museum. The paleontologist also took a mold and a cast from the rock.

The slab is one of only two known sites in the world with such a concentration of prints, according to NASA. It also contains the largest mammal track ever discovered from the Cretaceous period, which spanned from about 145.5 million years ago to about 65.5 million years ago. The track is about four inches square.

Experts say that the slab could boost our knowledge of the prehistoric era.

“This could be the key to understanding some of the smaller finds from the area, so it brings everything together,” Lockley said. "This is the Cretaceous equivalent of the Rosetta stone."

Paleontologists are shedding new light on the time of the dinosaurs. Experts, for example, recently announced the discovery of a new species of dinosaur in Egypt, marking an important prehistoric link between prehistoric Africa and Europe. The fossilized remains of Mansourasaurus shahinae, a school-bus sized dinosaur, were found in the Sahara desert.

Two nodosaurs passed through the Goddard campus 110 to 112 million years ago, according to a USGS paleontologist. Pictured here the second track, overlapping the first, looks to be a young version of the same creature. (Credit: NASA/GSFC/Rebecca Roth)

Last year, vandals wrecked a dinosaur footprint in rock at a renowned paleontology site in Australia.