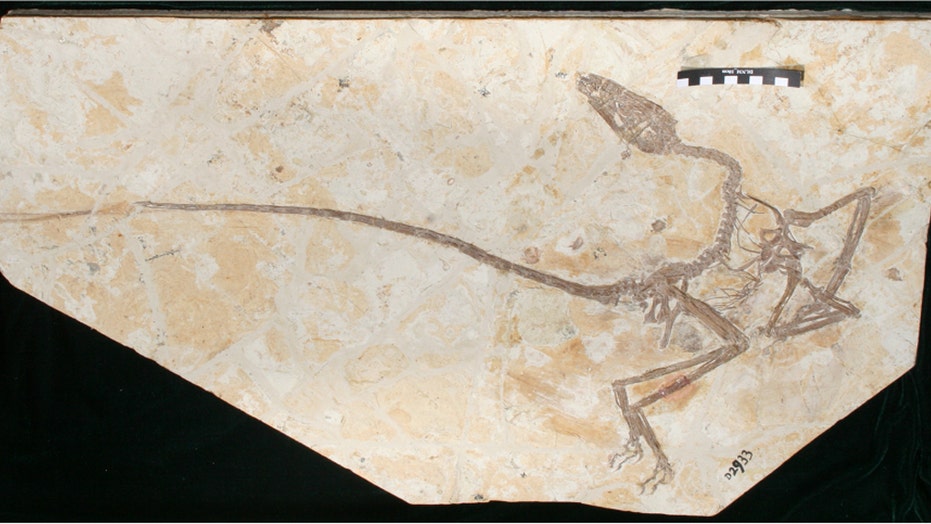 Paleontologists have discovered a new type of dinosaur in China that is shedding new light on how the ancient reptiles grew differently from modern-day birds.

Known as Wulong bohaiensis, the 120-million-year-old fossil contains both bones and feathers preserved and was discovered more than 10 years ago in the Jehol Province in China, according to a statement from the San Diego Natural History Museum.

“The new dinosaur fits in with an incredible radiation of feathered, winged animals that are closely related to the origin of birds,” said Dr. Ashley Poust, who analyzed the specimen, in the statement.

Wulong bohaiensis. The skeleton described in the new paper is remarkably complete. The name means “Dancing Dragon” in Chinese and was named in part to reference its active pose. (Credit: Ashley Poust)

“Studying specimens like this not only shows us the sometimes surprising paths that ancient life has taken, but also allows us to test ideas about how important bird characteristics, including flight, arose in the distant past," added Poust, who is the study's lead author.

The research has been published in the scientific journal, The Anatomical Record.

Described as smaller than a raven but larger than a common crow, the ancient reptile had a long, bony tail that "would have doubled its length," the museum said. It also had a "narrow face filled with sharp teeth" and was covered in feathers.

The researchers were able to cut and examine several bones of the dinosaur, an early relative of the Velociraptor, to give them a new look at how birds and dinosaurs are connected, a technique known as bone histology.

“The specimen has feathers on its limbs and tail that we associate with adult birds, but it had other features that made us think it was a juvenile,” Poust said. “Thankfully, our coauthors at the Dalian Natural History Museum were really forward thinking and allowed us to apply these techniques, not only to Wulong, but also to another dinosaur, a close relative that looked more adult called Sinornithosaurus.”

With the bones confirming the dinosaur was a juvenile, it signifies that certain dinosaurs grew "very mature looking feathers well before they were done growing," according to the museum. By contrast, birds don't grow their full adult plumage until after they've reached full size.

“Either the young dinosaurs needed these tail feathers for some function we don’t know about, or they were growing their feathers really differently from most living birds,” Poust explained.

The researchers also discovered that a fossil of another dinosaur, Sinornithosaurus, was not done growing either, due to histology. As a result, Poust says there's still a great deal to learn about dinosaurs.

“There was a lot of flying, gliding, and flapping around these ancient lakes,” Poust explained. “As we continue to discover more about the diversity of these small animals it becomes interesting how they all might have fit into the ecosystem.”

Earlier this month, a separate study attempted to put to bed the idea that a volcanic eruption played a greater role in the extinction of the dinosaurs than the asteroid that crashed into modern-day Mexico.

The asteroid, which hit Earth in the Yucatan Peninsula in Mexico and is now known as the Chicxulub crater, wiped out nearly 75 percent of all species on the planet. It may have also acidified Earth's oceans after its impact, according to a study published in October 2019.