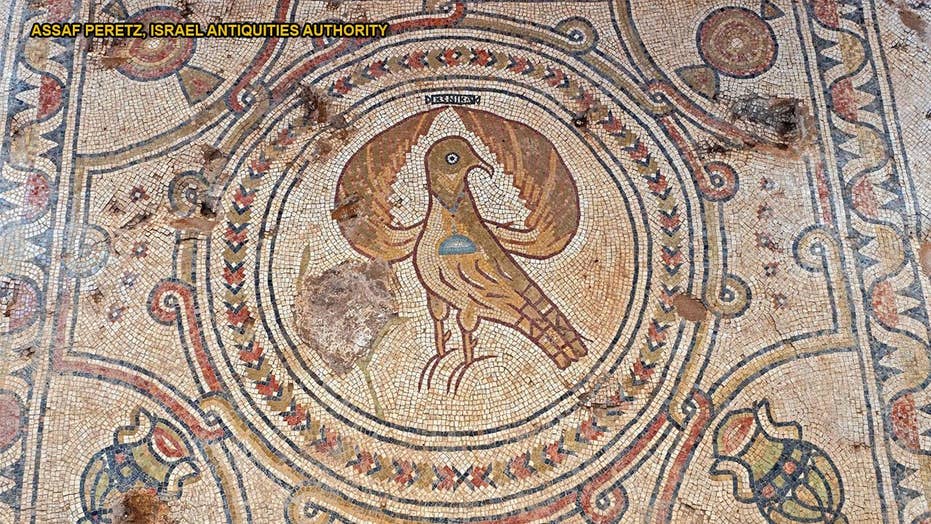 Archaeologists in Israel have discovered the remains of a 1,500-year-old church decorated with a mosaic inscription dedicated to a mysterious 'glorious martyr.' The Byzantine church, uncovered at Ramat Beit Shemesh near Jerusalem, was constructed during the reign of the Emperor Justinian in the 6th century A.D.

Archaeologists in Israel have discovered the remains of a stunning 1,500-year-old church decorated with beautiful mosaic floors and Greek inscriptions.

The Byzantine church, which features a mosaic inscription to a mysterious “glorious martyr” and a unique cross-shaped baptismal font, was uncovered at Ramat Beit Shemesh near Jerusalem. This week officials announced the finds from a three-year excavation project at the site.

The inscription to the "martyr" was uncovered in the church’s courtyard.

“The martyr’s identity is not known, but the exceptional opulence of the structure and its inscriptions indicate that this person was an important figure,” said Benjamin Storchan, who directed the excavation for the Israel Antiquities Authority, in a statement obtained by Fox News. The church is one of only a few discovered in Israel with a fully intact crypt, he added.

The first stage of the church’s construction took place during the reign of the Emperor Justinian in the 6th century A.D., according to the Israel Antiquities Authority. A beautiful side chapel was added later, during the reign of Emperor Tiberius II Constantine.

A mosaic Eagle, a symbol of the Byzantine Empire, was discovered at the site. (Picture: Assaf Peretz, Israel Antiquities Authority)

A Greek inscription found at the site explains that Tiberius II Constantine provided financial support for the church’s expansion.

“Imperial involvement in the building’s expansion is also evoked by the image of a large eagle with outspread wings – the symbol of the Byzantine Empire – which appears in one of the mosaics,” Storchan added.

Other items found during the excavation include Byzantine glass windows and lamps. An exhibition of artifacts from the site opened at the Bible Lands Museum in Jerusalem this week.

The Ramat Beit Shemesh site is one of a number of amazing archaeological locations in the region, many of which shed light on early Christianity.

Last year, a previously unknown 1,500-year-old painting of Christ’s face was uncovered at a Byzantine church in Israel’s Negev desert. Also in 2018, archaeologists announced the discovery of a large 1,500-year-old pool and elaborate fountain at the site of an ancient church near Jerusalem.

Archaeologists uncovered a stunning 1,500-year-old Christian mosaic that was once the floor of a church or monastery in the ancient coastal city of Ashdod-Yam in 2017. Also in 2017, an ancient Greek inscription was found on a 1,500-year-old mosaic floor near the Damascus Gate in the Old City of Jerusalem. The inscription mentions the Byzantine emperor Justinian, who ruled in the 6th century A.D., and commemorates the building’s founding by a priest called Constantine.

A 1,500-year-old church was discovered at a Byzantine-era rest stop between Tel Aviv and Jerusalem in 2015. In 2014, the remains of another church from the same period were uncovered in southern Israel.

A team of American and Israeli archaeologists recently said that they have found the Church of the Apostles, which is said to have been built over the house of Jesus’ disciples Peter and Andrew near Israel’s Sea of Galilee

Staircase to the crypt - interior view.

In a separate project, experts also believe they have found the lost Roman city of Julias, formerly the village of Bethsaida, which was the home of Jesus' apostles Peter, Andrew and Philip.

Earlier this year, Palestinian officials reported that an ancient 1,500-year-old Byzantine baptismal font had been discovered during renovation work at the Church of the Nativity in Bethlehem on the West Bank.