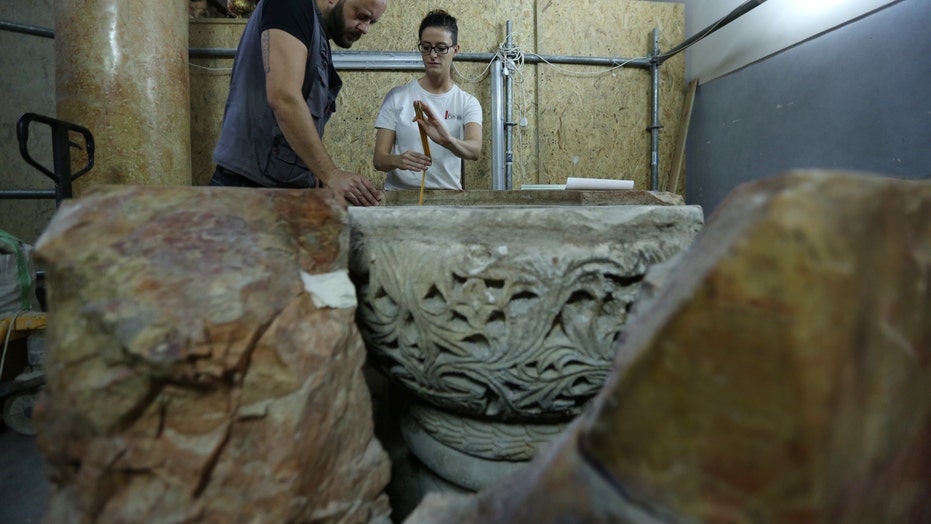 An ancient 1,500-year-old baptismal font has been discovered during renovation work at the Church of the Nativity in Bethlehem.

Bethlehem is Jesus’ birthplace, according to Christian tradition. The font is estimated to date back to between 501 and 600 A.D.

Ziad al-Bandak, head of a Palestinian presidential committee leading the church renovation, said Saturday that international experts are arriving in the biblical West Bank town to examine the receptacle.

Al-Bandak described the Byzantine font as a "magnificent" discovery that had been covered by the larger known vessel.

Palestinian Minister and Head of Restoration Commission for Church of the Nativity, Ziad al-Bandak (C) holds a press conference on the discovery of a baptismal font at the Church of the Nativity in Bethlehem, West Bank on June 22, 2019. (Photo by Wisam Hashlamoun/Anadolu Agency/Getty Images)

A UNESCO World Heritage site, the Church of the Nativity is located about 6.2 miles south of Jerusalem. The church is built on the site identified as Jesus’ birthplace by Christian tradition.

A restoration project was launched five years ago to overcome decades of neglect at the historic church.

Palestinian news agency WAFA reports that a ceremony to celebrate the end of the restoration project, which was planned for November, has been pushed back to May 2020. The postponement will allow the three churches in charge of the Church of the Nativity to undertake a restoration of the church’s grotto, WAFA reports.

The baptismal font was discovered during restoration work at the Church of the Nativity. (Photo by Wisam Hashlamoun/Anadolu Agency/Getty Images)

In a separate project at the site of an ancient city on the West Bank, archaeologists have been hunting for evidence of the tabernacle that once housed the Ark of the Covenant.