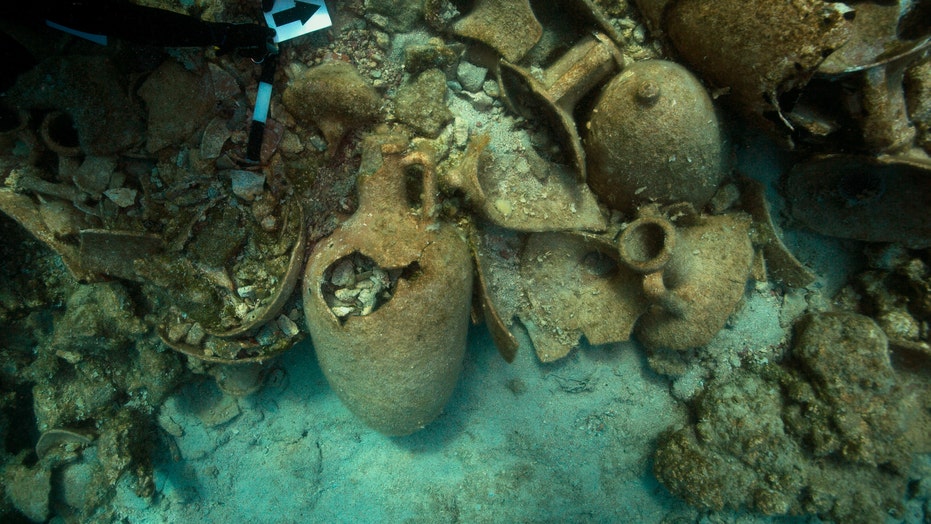 Five cargo-laden ancient shipwrecks have been discovered off a small Greek island.

The wrecks were discovered in June near the island of Levitha, according to officials. The most notable find was a wreck containing a shipload of mid-3rd-century B.C. amphorae, or ancient jars, from various locations around the Mediterranean. While some of the amphorae came from Greek Aegean islands such as Knidos Kos and Rhodes, others came from the ancient Phoenician civilization and its city of Carthage in North Africa.

Amphorae discovered on the other wrecks were the 2nd and 1st-centuries B.C. and the early Christian period. Archaeologists also found a granite anchor pole which likely dates back to the 6th-century.

Weighing 882 pounds, the anchor is the largest of its type discovered in the Aegean, according to experts.

A diver inspects an amphora, or ancient jar, on the seabed. (Ephorate of Underwater Antiquities)

The underwater exploration is part of the three-year project that runs through 2021 and aims to identify and document ancient shipwrecks near the islands of Levitha, Mauria, Glaros and Kinaros. The area “played a key role in ancient and modern navigation,” according to a statement released by the Greek Ministry of Culture and Sport.

During the recent dives, traces of eight shipwrecks were spotted, dating mainly to the ancient Greek and Roman periods.

“In addition to the wrecks, a number of individual findings, notably pottery discharges and anchors, documented a continued use of this sea route from the Archaic to the Ottoman period,” officials added in the statement.

Other Mediterranean shipwrecks have been grabbing attention. An ‘undisturbed’ Roman-era shipwreck, for example, was recently discovered off the coast of Cyprus.

The wrecks were found off the small Greek island of Levitha. (Ephorate of Underwater Antiquities)

In 2017, archaeologists in Egypt discovered three Roman-era shipwrecks and other stunning ancient artifacts on the Mediterranean seafloor off the coast of Alexandria.

Beyond the Mediterranean, climate change researchers working in the Black Sea also discovered 60 shipwrecks dating back 2,500 years, which include vessels from the Roman and Byzantine eras.

A diver brings an amphora up from one of the wreck sites. (Ephorate of Underwater Antiquities)

The underwater exploration is part of the three-year project that runs through 2021. (Ephorate of Underwater Antiquities)

Off the coast of Portugal, the Underwater Archaeological Chart of the Municipality of Cascais contains a host of shipwrecks dating back to the Roman era.