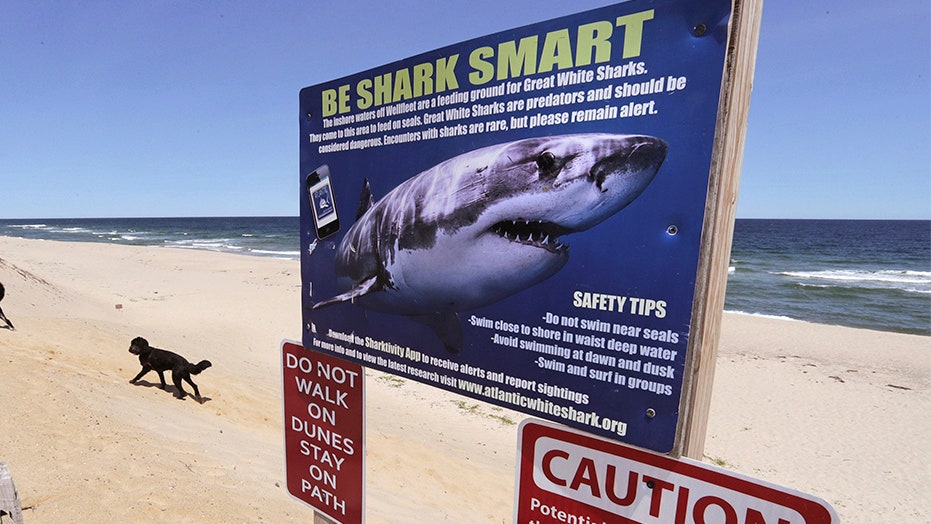 Researchers on Cape Cod are seeking to keep beachgoers safe this summer with a study on sharks’ hunting and feeding habits following two attacks involving great whites in the area last year – one of which was fatal.

The study, run by the Massachusetts Division of Marine Fisheries and the nonprofit Atlantic White Shark Conservancy, will build on a previous five-year study that focused on how the region’s sharks migrate and where they spend time along the Cape each summer. It will place specialized tags on sharks’ dorsal fins to precisely track their whereabouts – and some of the tags will even be outfitted with video cameras.

“If we can figure out how, where and when these sharks are attacking seals, we may be able to see if there is a pattern or any predictability to it,” said state marine biologist Greg Skomal, who is leading the study. “If there are hot spots that can be identified, we certainly want to share that information with the public.”

A woman walks with her dogs at Newcomb Hollow Beach, in Wellfleet, Mass., where a boogie boarder was bitten by a shark in 2018 and later died of his injuries. (AP)

Last August on Cape Cod, a New York man was severely injured in a shark attack near Truro, but survived. Then weeks later, a Massachusetts man was attacked and killed while boogie boarding near Wellfleet, marking the first fatal attack in the state in more than 80 years.

The project will focus on learning how to predict where shark attacks might occur so swimmers can be made aware if there’s an elevated risk to their safety.

Skomal hopes the new data — combined with the information still being analyzed from the prior study — can also shed light on how many seals the region’s great whites are actually eating and whether that’s having an impact on the seal population. Some residents and commercial fishermen have suggested the region’s ever-growing seal population is the more pressing problem, since that’s what’s drawing the sharks in the first place.

Local officials also have focused on ways to improve emergency response at area beaches this season, such as installing emergency call boxes and first aid kits stuffed with tourniquets and other medical supplies. Cape Cod lifeguards have been trained in how to spot sharks and respond to shark attacks, and many towns have invested in better communications systems, ATVs and other equipment for emergency responders.

And Cape Cod isn’t the only area in the United States where bathers suffer the occasional shark attack. An eight-year-old boy was attacked off the coast of Bald Head Island in North Carolina on Sunday, marking the state’s third shark attack already this month. He’s expected to make a full recovery.

The victim is expected to make a full recovery in what marks the third shark attack in the area in two weeks; Bryan Llenas reports.

However, a 17-year-old girl attacked June 2 in the state later needed to have her leg amputated.

“When I pulled her up a shark came up with her, and it was a big shark,” her father, Charlie Winter, told reporters following the attack. “And it kind of thrashed a little bit, and it had a big – just a big eye, just staring at you. And I immediately just started to hit it.”

Overall, shark attacks are rare. There were just 32 incidents in the United States in 2018, down from 53 in 2017, according to data from the Florida Museum of Natural History’s International Shark Attack File.