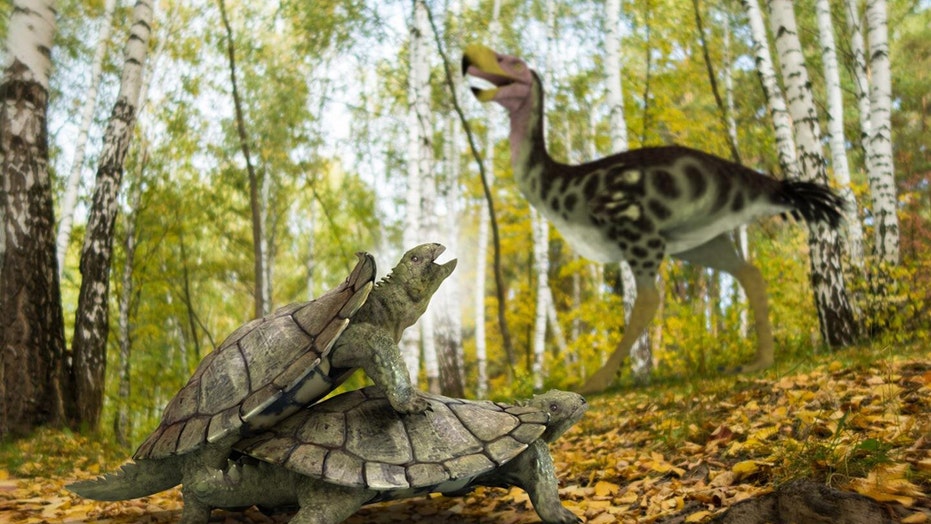 The asteroid that wiped out the dinosaurs 65 million years ago also caused nearly 75 percent of all species on the planet to go extinct. However, a new study suggests one "bizarre" form of life managed to survive — a land turtle.

Fossils of the turtle, known as Laurasichersis relicta, were recently discovered in northern France. The fossils date to around 56 million years ago, 10 million years after the asteroid hit Earth in the Yucatan Peninsula in Mexico. The asteroid may have also acidified Earth's oceans, according to a study published in October 2019.

At this point, it's unclear why or how L. relicta survived the impact blast, according to the study's lead author, palaeontologist Adán Pérez García. "The reason why Laurasichersis survived the great extinction, while none of the other primitive North American, European or Asian land turtles managed to do so, remains a mystery," Pérez García said in a statement.

A reconstruction of Laurasichersis relicta which lived in the northern hemisphere 66 million years ago. (José Antonio Peñas, SINC)

L. relicta is a "stem" turtle, which means it can be traced back to the earliest turtles. All turtles are descendants of two branches that separated 160 million years ago, but "virtually all of the early groups of turtles" became extinct after the asteroid impact.

The ancient turtle is described as "peculiar," due to some of its odd characteristics, compared to modern-day turtles. It had a shell that reached just over 23 inches in adulthood but was not able to retract its head.

"This physical limitation allowed it to develop other protective mechanisms such as an armor with large, mutually linked spikes, which were hard structures located on the neck, legs and tail," the statement added.

The turtle was unique because its shell was made up of a larger number of plates than seen in most turtles, Pérez García said. "Although the number of plates is usually the same in most turtles, the ventral shell region of the new species was provided with a greater number of these elements than those known in any other turtle," the researcher added in the statement, while also describing the fossils as "bizarre" in the study.

Despite the fact that L. relicta was discovered in a quarry in Mont de Berru, France, its ancestors lived in modern-day Asia.

"It is the last representative of a group previously identified in China and Mongolia, where it was known since the Jurassic, more than 100 million years before the new European Laurasichersis turtle existed," the researcher said. "This group arrived on this continent very shortly after the end of the Mesozoic, 66 million years ago."

The study has been published in Scientific Reports.