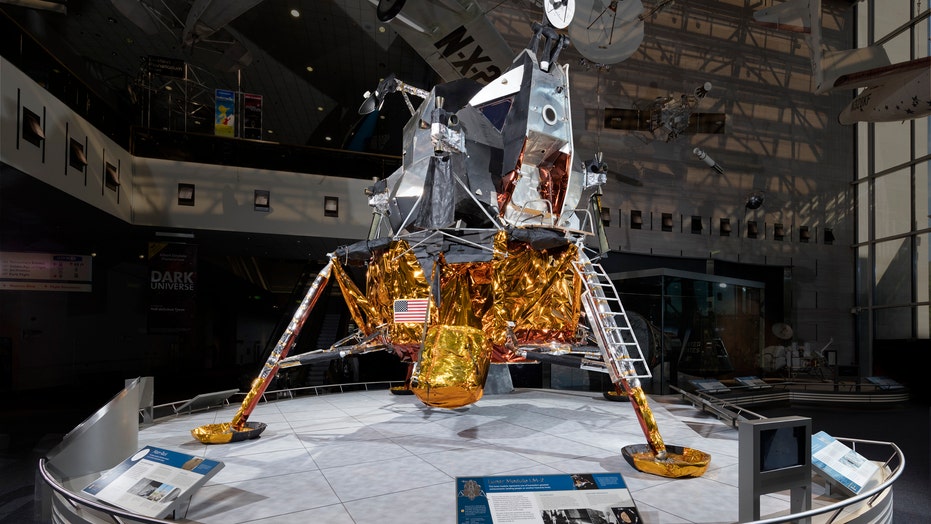 To celebrate the 50th anniversary of the Apollo 11 Moon landing, the Smithsonian National Air and Space Museum is showcasing a host of amazing artifacts from the epic mission.

On July 20, 1969, Neil Armstrong stepped from the Eagle Lunar Module and made his “giant leap for mankind.” To celebrate the 50th anniversary of the Apollo 11 Moon landing, the Smithsonian National Air and Space Museum is showcasing a host of stunning artifacts from the epic mission.

“Starting on July 16th, we’re going to put Neil Armstrong’s spacesuit back on display, and we have lots of events scheduled on the National Mall and inside the museum throughout that week,” Dr. Teasel Muir-Harmony, curator of the Smithsonian’s space history department, told Fox News.

A lunar module used for testing in the Apollo 11 program is among a host of artifacts from the mission at the Smithsonian in Washington D.C. “Seeing the artifact really wows people and gives them a sense of some of the ground-breaking technological development that was necessary to go to the Moon,” said Muir-Harmony. “The one in our collection was Lunar Module-2. It was the second Lunar Module, it was supposed to do Earth orbital tests, but Lunar Module-1 did a good job, so they repurposed it for drop tests on Earth.”

After Apollo 11, the module was donated to the Smithsonian, which has modified the vehicle to closely resemble the Eagle lunar module that transported Neil Armstrong and Buzz Aldrin to and from the surface of the Moon.

The descent stage of the Eagle Lunar Module remains on the Moon while the Module’s ascent stage carried Armstrong and Aldrin back to Apollo’s Columbia Command Module. After the astronauts safely docked with the Command Module, the ascent stage was jettisoned and programmed to crash into the Moon, according to the Smithsonian.

Muir-Harmony was speaking at a Smithsonian Channel event in New York City celebrating the 50th anniversary of the Moon landing.

THERE WAS A BIT OF TENSION': ASTRONAUT DESCRIBES WATCHING MOON LANDING WITH BUZZ ALDRIN’S FAMILY

The Smithsonian also has the Columbia Command Module in its collection. “The command module was the astronauts’ home,” Muir-Harmony explained. “The mission itself was a little over 8 days - when you see the command module in person you get a sense of what it was like to live and work in space and a sense for the technology at the time and how complex it was as well.”

“I think you get a good sense of why the astronauts had to train as much as they did and go through so many simulations,” she added. “It’s a quite special piece in the collection.”

Muir-Harmony told Fox News that the impact of Apollo 11 remains a powerful one. “I am moved by some of the reflections that the astronauts had about their experience in outer space,” she said. “They said ‘you know, we went to the Moon and what we discovered was Earth and an appreciation for Earth’.”

“To see Earth from space and see that there are no political boundaries, and then you also see a beautiful planet that’s vulnerable,” she added. “Many of the astronauts came to appreciate their home planet even more.”