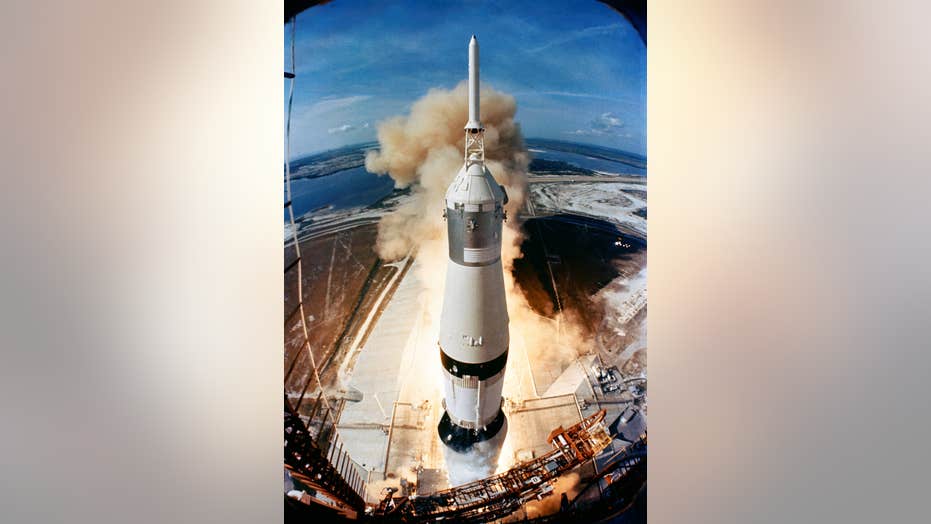 To commemorate the 50th anniversary of the launch Tuesday, NASA spoke to Apollo 11 Command Module Pilot Michael Collins at the launch pad where he, Neil Armstrong and Buzz Aldrin set out on their epic mission to the Moon.

Sat atop a powerful Saturn V rocket, the eyes of the world were on the three astronauts as they began their 225,000-mile journey to Earth’s natural satellite.

“Apollo 11 was serious business, we crew felt the weight of the world on our shoulders,” Collins said. “We knew that everybody would be looking at us, friend or foe.”

Personnel within the Launch Control Center watch the Apollo 11 liftoff from Launch Complex 39A today at the start of the historic lunar landing mission. The LCC is located three and one-half miles from the launch pad. (NASA)

After the countdown, the crewmembers were lifted into the sky by 7.5 million pounds of thrust. “You feel jiggling, left to right,” Collins said. Once the rocket cleared the launch tower, however, Collins, Armstrong and Aldrin really felt the force of the Saturn V rocket. “You’re more conscious of the gigantic amount of power below you,” he added.

At Kennedy Space Center’s Firing Room 1, JoAnn Morgan was working as an Instrumentation Controller for the launch.

“There was palpable tension, and the firing room quieted down as soon as the flight crew came out,” she explained, during a NASA interview in the Firing Room. “It was the end of a 5-year period of intense, intense work.”

“Apollo 11 was my first opportunity to be there at liftoff,” she added.

She was also the only woman in the room. “I was just me, doing my job – I was just thrilled to be there,” she said. “After the launch, I felt totally accepted as part of the launch team.”

APOLLO 11'S EPIC MISSION TO THE MOON IN PICTURES

“Some men just resist change and a woman coming into the workplace is a change,” she added, quipping that “it’s like mosquitos in Florida, you just swat them.”

July 16, 1969: This image captures the launch of Apollo 11 on the first manned space mission to land on the Moon. (AP)