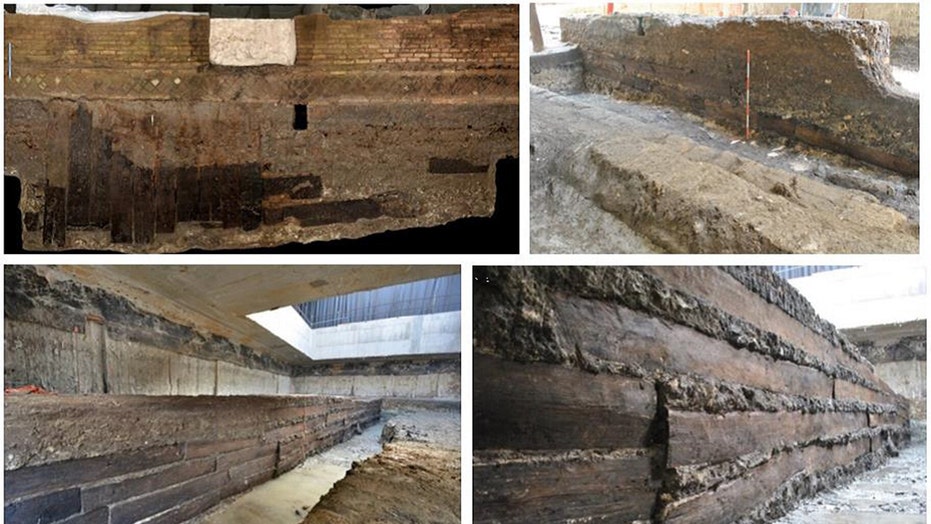 Parts of Ancient Rome were built on timber imported from more than 1,000 miles away in modern-day France, a new study has found.

The researchers, who noted that the Romans used timber trading to build the empire, found that oak used for portico planks came from the Jura mountains in eastern France. Twenty-four oak timber planks that were part of a Roman portico and were excavated between 2014 and 2016 were analyzed for the study.

"This study shows that in Roman times, wood from the near-natural woodlands of north-eastern France was used for construction purposes in the center of Rome," the study's lead author, Mauro Bernabei, of Italy's National Research Council, said in a statement.

Some of the oak planks in situ in the foundation of the portico. (Credit: Bernabei at al., 2019)

"Considering the distance, calculated to be over 1700km (1,056 miles), the timber sizes, [and] the means of transportation with all the possible obstacles along the way, our research emphasizes the importance of wood for the Romans and the powerful logistic organization of the Roman society," Bernabei added. Until now, the timber trade from that time period is poorly understood, due to the few remaining fragments that can be analyzed.

The researchers looked at the tree-ring widths for each plank and ran a number of statistical tests to determine the average chronology and were able to date 13 of them successfully. Eight of the 13 samples were narrowed down to be dated between 40 and 60 A.D., using the sapwood present.

Ancient Rome had "immense and complex" timber requirements, the researchers noted, getting trees from different parts of the Empire for a multitude of uses, including building ships, construction and making fires.

The research has been published in the scientific journal PLOS One.

Ancient Rome continues to reveal its secrets. Researchers, for example, recently discovered an ancient fast-food joint in the ruins of Pompeii near Naples.

Last year, experts uncovered a scrawled piece of text on a wall in Pompeii that is rewriting the history of the famous ancient eruption of Mount Vesuvius.

In October, a pair of 2,000-year-old scrolls believed to have belonged to the family of Julius Caesar were virtually "unwrapped" for the first time.