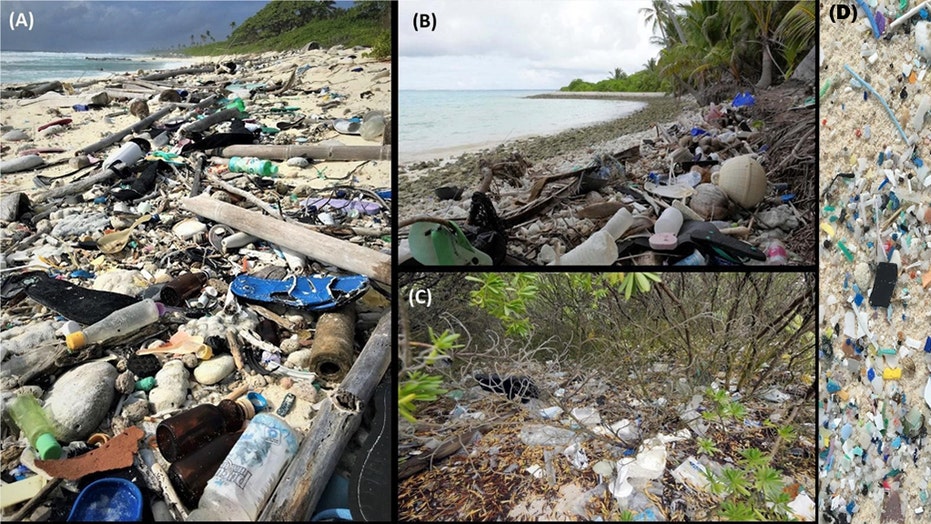 Fox News Flash top headlines for May 16 are here. Check out what's clicking on FoxNews.com

Even remote, uninhabited islands are still covered in trash, a new study has found.

On the Cocos Keeling Islands, about 1,300 miles northwest of Australia, there are reportedly more than 400 million pieces of garbage, according to research by marine biologist Jennifer Lavers.

Lavers, from Australia's University of Tasmania, published her findings in Scientific Reports on Thursday.

MOUNT EVEREST IS COVERED IN GARBAGE AND DEAD BODIES: REPORT

"You get to the point where you're feeling that not much is going to surprise you anymore and then something does ... and that something [on the Cocos Keeling Islands] was actually the amount of debris that was buried," Lavers, who has done similar studies on other remote islands, told NPR.

The Cocos Keeling Islands, a group of 27 islands in the Indian Ocean, are mostly uninhabited except for two, according to a website for the islands. NPR said the islands only make up 6 square miles of land.

Marine biologist Jennifer Lavers published a study Thursday about plastic debris she and her colleagues found on seven of the Cocos Keeling Islands in 2017. Pictured: (A) eastern side of South Island, (B) north side of Direction Island, (C) beach-back vegetation along the north-east side of Home Island, (D) micro-plastics along the eastern side of South Island.<br> (Nature.com)

The outlet reported Lavers did her research in 2017 on seven of the islands.

According to the study, she and her colleagues chose the Cocos Keeling Islands because, as uninhabited locations, the plastic they found wouldn’t be from the islands themselves and no one would have been there to remove any of it.

Lavers and her team reportedly marked off sections of the beaches and counted all the plastic in those sections. They then multiplied that number by the total beach area on all the islands, NPR reported.

"More than 414 million pieces of plastic debris are estimated to be currently sitting on the Cocos Keeling Islands, weighing a remarkable 238 tons," Lavers told the outlet.

"What was really quite amazing was that the deeper we went, the more plastic we were actually finding,” she added, saying she dug as deep as 4 inches into the sand. She reportedly estimated there are 380 million pieces of plastic below the surface.

The study highlighted that the plastic debris on the Cocos Keeling Islands “is not unique,” and that, along with other coastal areas, they “reflect the acute symptoms of an otherwise rapidly increasing environmental hazard.”

“Prevention is key, and for that, a multi-prong approach is urgently required,” the study warned.