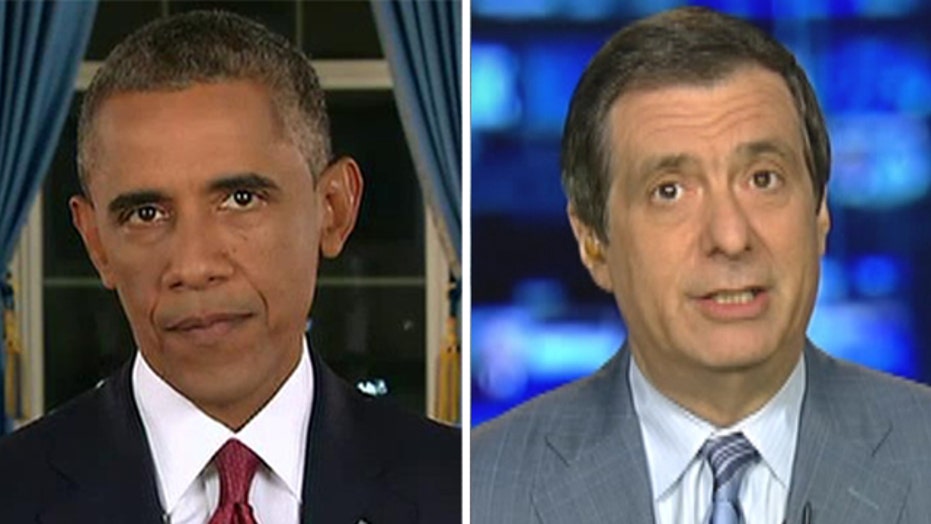 Kurtz: Obama's midterm prospects clouded by the fog of war

Could President Obama’s military move against ISIS derail the Republican freight train that appeared to be barreling toward victory in the midterm elections?

It’s possible, but not very likely.

Until Wednesday night’s speech, the president was taking a political beating on foreign policy that had a toxic effect on his approval ratings. And that was a major drag on vulnerable Democrats, especially those red-state senators trying to hang on and keep the chamber from tipping to the GOP.

But now, whether or not Obama is leading from behind, as his critics say, he has committed to using U.S. military power against the terrorists. And that could scramble the electoral outlook.

You think it’s an accident that Congress doesn’t want to vote on authorizing military force before November? The Republicans feel they have a winning hand and don’t want to roll the dice, and some Democrats are nervous as well. So much easier to just issue statements and take potshots if things go badly. Talk about leading from behind—the Hill isn’t leading at all. And most of the press, laser-focused on the White House, isn't holding the leadership accountable.

The best-scenario for Obama is that a climate of being at war (though John Kerry refuses to use that word) creates a rally-round-the-president effect. A sense of unity against a common enemy could boost his abysmal poll numbers (38 percent approval in a new Fox survey). And that could help some shaky Democratic candidates for whom the president has been an albatross.

At the very least, the president could stop the bleeding that intensified when he said he didn’t have a strategy to defeat ISIS. In the world of politics, being seen as doing something is usually preferable to doing nothing. Obama is now viewed as at least trying to take the fight to the terrorists in the wake of those brutal beheadings.

At the same time, things could go badly on the battlefield: American casualties, civilians mistakenly targeted, and so on. Then public sentiment could shift against Obama, and by extension the Democrats, as people remembered what they didn’t like about being militarily engaged in Iraq.

But the most likely outcome, in my view, is this: The military assault against ISIS becomes a slog. There are lots of airstrikes with no clear outcome. Developing adequate Iraqi and Syrian partners on the ground takes time; mobilizing an international coalition takes even longer. The story slips out of crisis mode, off the front pages and the top of the newscasts. And if that happens, the big voting issue remains the economy, to a lesser extent health care, and a general unease with the country’s direction. What’s more, the traditional pattern of the party in power losing seats in the sixth year of a presidency takes hold.

If the military effort against ISIS goes poorly, questions will resurface about whether the media adequately warned about the risks, which few did in the runup to the 2003 invasion of Iraq. In that vein, this passage in the New York Times is instructive:

“Some officials and terrorism experts believe that the actual danger posed by ISIS has been distorted in hours of television punditry and alarmist statements by politicians, and that there has been little substantive public debate about the unintended consequences of expanding American military action in the Middle East.”

“President Obama’s strategy to beat back Islamic State militants spread across Iraq and Syria will depend on far more than U.S. bombs and missiles hitting their intended targets.

“In Iraq, dissolved elements of the army will have to regroup and fight with conviction. Political leaders will have to reach compromises on the allocation of power and money in ways that have eluded them for years. Disenfranchised Sunni tribesmen will have to muster the will to join the government’s battle. European and Arab allies will have to hang together, Washington will have to tolerate the resurgence of Iranian-backed Shiite militias it once fought, and U.S. commanders will have to orchestrate an air war without ground-level guidance from American combat forces.”

People don’t usually vote on foreign policy unless we’re engaged in a full-fledged war. If the assault on ISIS doesn’t have that feel by November, most folks will do what they usually do by voting their pocketbooks and rendering a judgment on the incumbent.