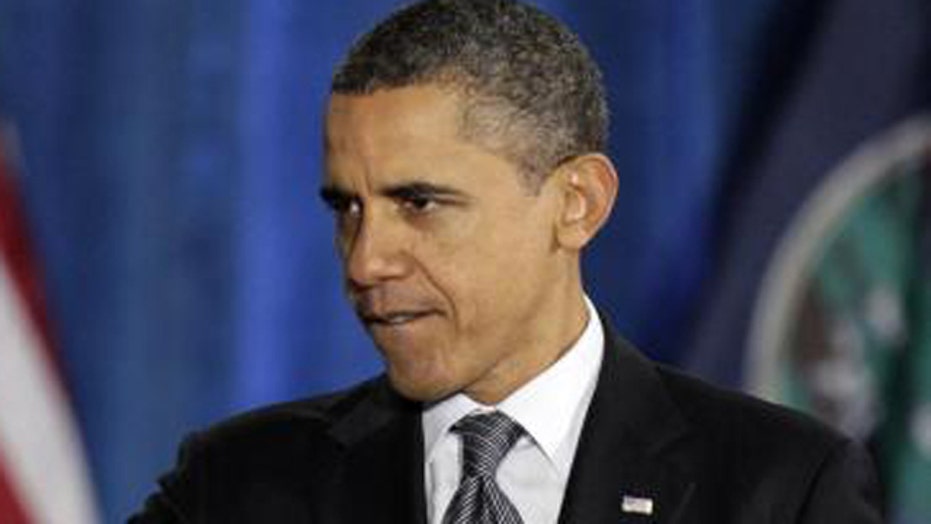 President to pivot from ObamaCare to 'income inequality'

The Obama administration has set the stage for a push that could rekindle cries of class warfare -- calling for renewed long-term unemployment benefits, a minimum wage increase and a campaign against what Democrats call "income inequality."

Ahead of his multi-week, holiday vacation in Hawaii, President Obama pushed Congress to move forward on extending federal unemployment benefits that weren't included in the budget deal Senate Democrats and House Republicans struck to fund the federal government for the next two years. The White House has scheduled an East Room event on Tuesday in which the president will appear with people who lost that insurance.

Before the break, Obama called on Congress to follow the lead of 14 states that hiked their minimum wages and do the same for the federal wage.

"We know that there are airport workers, and fast-food workers, and nurse assistants, and retail salespeople who work their tails off and are still living at or barely above poverty," the president said during a Dec. 4 speech in Washington. "And that's why it's well past the time to raise a minimum wage that in real terms right now is below where it was when Harry Truman was in office."

The president went on to suggest that economic inequality, brought on partially by the current federal minimum wage, is a drag on the American way of life.

"The combined trends of increased inequality and decreasing mobility pose a fundamental threat to the American dream, our way of life and what we stand for around the globe," the president said in the December speech.

Critics suggest the president is turning to populist themes -- and stoking the class warfare debate -- in an effort to pivot away from the troubled rollout of his signature health care law. Far fewer people than projected have enrolled in the federal health care exchange, and one official over the weekend played down the administration's goal of 7 million enrollees. Talk of ladders of opportunity and a strengthened middle class would create a stark contrast to the badgering the White House took on health care to end 2013.

Still, some say pitting one class of people against another could backfire on an administration that has already seen its approval numbers plummet over the last year.

"I think the administration is playing with dynamite," Karl Rove, a Fox News contributor and former adviser to President George W. Bush, told Fox News. "In the short run they get some advantage from talking about the minimum wage and the extension of unemployment benefits. But the more this becomes a question of taking from those who have to those that don't have, the more they engage the American people in a very negative way for the administration."

That potential blowback hasn't stopped some Democrats from taking the president's upcoming agenda and running with it.

"When I said we would take dead aim at the Tale of Two Cities, I meant it. And we will do it," De Blasio said. "I will honor the faith and trust you have placed in me. And we will give life to the hope of so many in our city. We will succeed as One City."

"Please remember, we do not ask more of the wealthy to punish success. We do it to create more success stories," he said.

The president is expected to aim his populist rhetoric directly at Congress during the Jan. 28 State of the Union Address where he'll likely promote an agenda headlined by economic inequality, continuing implementation of the health law and immigration reform. In a separate speech sometime in January, he's also expected to address an administration overhaul of the NSA spying programs after a recent review brought on by the leaks by former NSA employee Ed Snowden.

While Snowden's revelations have taken a toll on the president's ratings, it's the health care law that some Democrats worry will outweigh a populist tone.

"I think there is a very compelling case that Democrats could make on those particular issues, how food stamps affect the pocket, how it affects children. But if they don't do that and spend more time running from ObamaCare I don't see how Democrats really have [the] upper hand," said Basil Smikle, a Democratic strategist.

And the president even hedged a bit in his December remarks about whether much of his agenda on economic inequality can make it through Congress either this year, or before the end of his presidency.

"I realize we are not going to resolve all of our political debates over the best ways to reduce inequality and increase upward mobility this year, or next year, or in the next five years," he said. "But it is important that we have a serious debate about these issues."

Republicans such as Florida Sen. Marco Rubio are ready for that debate but see a very different fix to the nation's continuing economic woes.

In a web video posted to mark the 50th anniversary of President Lyndon Johnson's "War on Poverty," Rubio called that war a failure, and said more government intervention isn't the way to help the poor.

"After fifty years, isn't it time to declare big government's war on poverty a failure?" Rubio said. "Instead of continuing to borrow and spend trillions of dollars on government programs that don't work, what our nation needs is a real agenda that helps people acquire the skills they need to lift themselves out of poverty and to pursue the American dream."