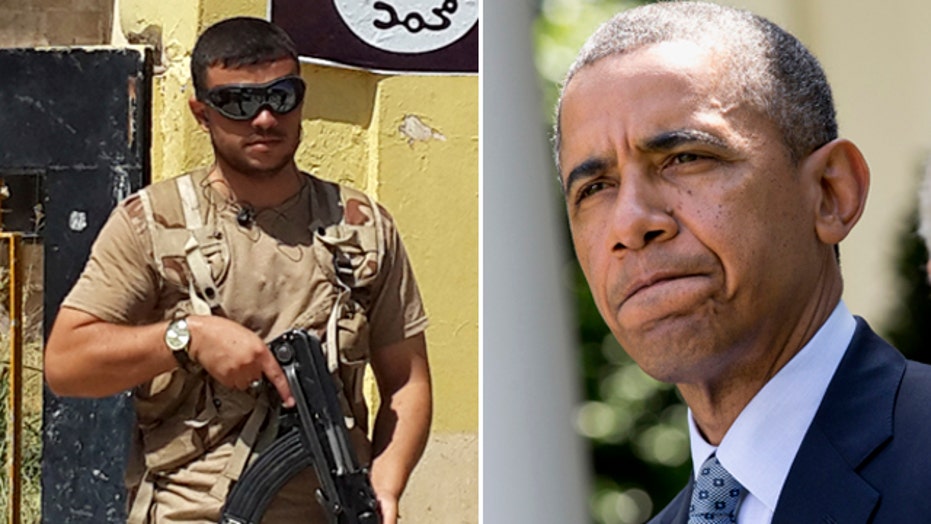 How much detail should Obama reveal about his ISIS strategy?

The Obama administration is reportedly preparing a campaign to destroy the Islamic State militant group that could outlast the president's remaining time in office, according to a published report.

The first phase, airstrikes against Islamic State, also known as ISIS, is already under way in Iraq, where U.S. aircraft have launched 143 attacks since August 8. The second phase involves an intensified effort to train, advise, and equip the Iraqi Army, Kurdish Peshmerga fighters, and any Sunni tribesmen willing to fight their ISIS co-religionists. The Times reports that this second phase will begin sometime after Iraq forms a new government, which could happen this week.

Obama was scheduled to outline his plan in a meeting Tuesday with House and Senate leaders before addressing the nation in a speech Wednesday, the eve of the 13th anniversary of the September 11, 2001, terror attacks. A senior Obama administration official told Fox News imminent, new military action in either Iraq or Syria was not expected to be announced in Wednesday's speech. A senior White House official told Fox News that Obama's primary aim will be to update the American public on what the strategy is to deal with the militant group, saying the administration wants "people to understand how he's approaching this."

In an interview that aired Sunday on NBC's "Meet The Press," Obama vowed that the United States would go "on the offensive" against the militants, who have seized broad swaths of territory in Syria and Iraq over the summer.

The interview was conducted over the weekend after the president returned from a two-day NATO summit in Wales, where the U.S. and nine of its European allies agreed to take on the militants due to the terror threat they pose. Secretary of State John Kerry is due to travel to the Middle East this month in an effort to secure the backing of Arab states for an anti-ISIS campaign, while Secretary of Defense Chuck Hagel was due to arrive in Turkey on Monday to press that country's leadership for support. Among the issues discussed will be the possibility of closing the country's border with Syria, which has been a popular route for Western-born fighters looking to join ISIS.

On Sunday, the head of the 22-member Arab League urged the group's members to make a "clear and firm decision for a comprehensive confrontation" with "cancerous and terrorist" groups. Nabil Elaraby called ISIS a threat to the existence of Iraq and its neighbors and "one of the examples of the challenges that are violently shaking the Arab world, and one the Arab League, regrettably, has not been able to confront."

It wasn't immediately clear what steps the Arab League would take in supporting the West's campaign against ISIS, and reaching a consensus on how to move could be complicated by Arab world rivalries and member countries' different spheres of influence. A draft resolution obtained by The Associated Press offered only routine condemnation of terrorist groups operating in the region. It also called on its member states, which include Egypt, Saudi Arabia, Jordan, Lebanon, Qatar and the United Arab Emirates to improve information-sharing and legal expertise in combating terrorism, and to prevent the paying of ransom to militants.

The Times reported that White House officials acknowledge that even if European and Arab countries offer their support for operations in Iraq, getting them to agree to possible operations in Syria would be much more difficult. U.S. officials have said repeatedly that the Obama administration is weighing all options for pursuing ISIS in that country.