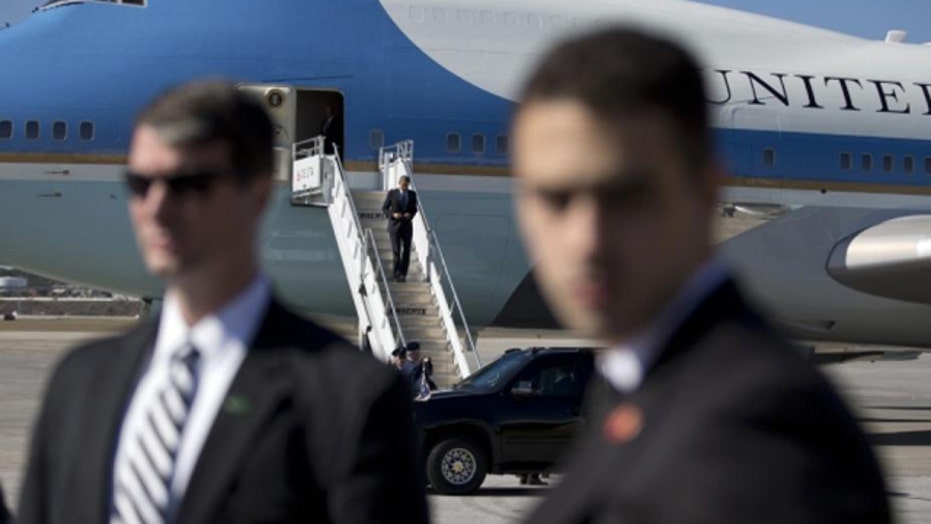 WASHINGTON – While the White House points to security concerns as the chief reason why President Obama skipped the anti-terrorism rally in Paris over the weekend, some suggest the Secret Service and his advance team could have made it happen -- if they really tried.

Instead, critics say the security explanation is being used as an “excuse.” Brad Blakeman, who served on the advance team for George W. Bush’s campaign, said the Secret Service is the “scapegoat” here.

“The president can go wherever he wants to go,” Blakeman said.

To be sure, presidential travel is a herculean task – particularly for an outdoor, international rally just days after a major terror attack – but it appears little effort was made to explore the possibility of Obama attending the show of unity in Paris, attended by more than 40 world leaders.

A Secret Service official told Fox News that they were not asked or notified about a possible trip to Paris. This coincides with reports that White House aides were caught off guard by the size of the march and didn’t ask the president if he wanted to attend.

So could Obama have dispatched a high-level surrogate? Even the White House acknowledges that should have happened. (Attorney General Eric Holder was in town, but for reasons that aren’t quite clear he returned to Washington instead of attending the rally.)

But could Obama himself have gone?

Possibly, those with experience in presidential travel say.

“There was no more important event than this and if they put their minds to it, the Secret Service and our military could have secured the area,” Blakeman, a top adviser to Bush, told FoxNews.com. “The fact is, we let a friend down and used security as a convenient excuse.”

Blakeman called it “absolute nonsense” that the White House cited security as a reason for Sunday’s no-show.

On Monday, White House Press Secretary Josh Earnest made the rare concession that “we should have sent someone with a higher profile to be there.”

But he pointed to the short notice for the event and the security apparatus that would come with a presidential visit – and its potential impact on the event itself.

When pressed by reporters on Tuesday, Earnest once again pointed to security concerns but said under different circumstances, “the president would have liked the opportunity to participate in the march, but there were complications.”

Earnest noted the event was organized in 36 hours, took place on foreign soil and was being held outdoors. “Trying to add the president would have had a significant impact because of security in place,” he said.

When asked why Vice President Biden didn’t attend, he pointed to the same logistical considerations.

But Blakeman said an advance team could have been scrambled “at a moment’s notice.”

“We wouldn’t have to announce we were going ahead of time,” he said. “We’d have planes at our disposal, armored vehicles on the ground. We don’t have to book a flight commercially.”

Dan Bongino, a former Secret Service agent who ran unsuccessfully as a Republican for Congress last year, said the security explanation is “crap.” He noted that Obama has arranged to travel to large, international gatherings before.

“The Mandela funeral, it was a security disaster but they were able to handle it,” he said, referring to the service for former South African leader Nelson Mandela in 2013.

That’s not to say an Obama visit on 36 hours’ notice wouldn’t be a huge lift for the Secret Service, and potentially cause headaches for the Paris crowd – which the administration claimed was a consideration.

In a statement, the Secret Service said Tuesday “it would have been a challenging advance to have a Secret Service protectee attend the Paris rally based on what we know.”

“Our logistic and security requirements had the potential to affect the planning of the event,” Secret Service spokesman Robert Hoback said.

House Democratic Leader Nancy Pelosi on Tuesday defended the White House, saying the Paris rally was a spontaneous event, and presidential travel “is not spontaneous.”

Israeli Prime Minister Benjamin Netanyahu did make it to the rally despite the inherent risks in him attending a large-scale gathering. However, he was reportedly asked by French President Francois Hollande not to attend and did anyway.

Secretary of State John Kerry might have been a logical surrogate but was in India at the time. Kerry said he wanted to attend the march but a “prior commitment” in India meant he wasn’t able to; he plans to visit France later in the week.

Though attending the march was mostly symbolic, failing to send a high-level official cost the U.S. an important leadership opportunity on the world stage and has weakened the country’s role in the global war against terror, some lawmakers claim.

“We should have been there and it’s not sending the right kind of signals,” Sen. Dan Coats, R-Ind., told Fox News on Tuesday.