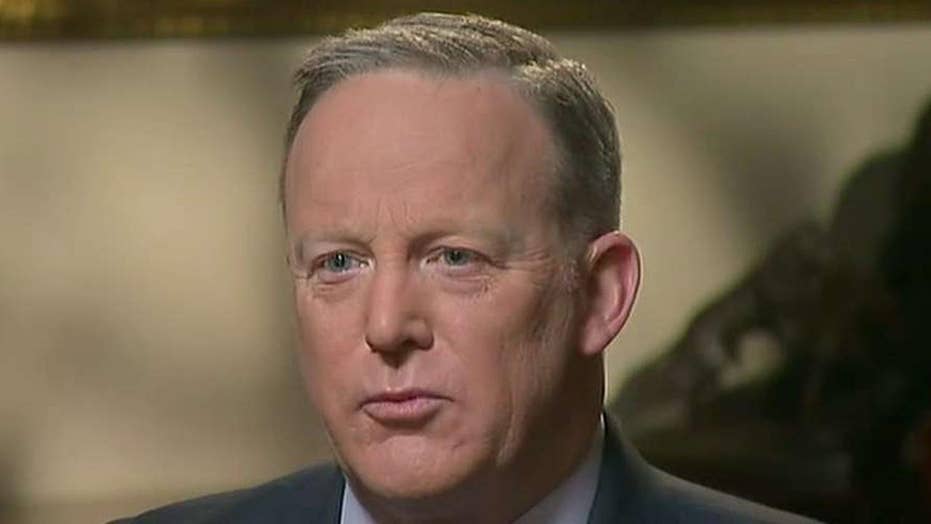 Sean Spicer: No reason for Sessions to recuse himself

In interview to air on 'Fox & Friends,' the White House press secretary defends the attorney general

The White House is standing by Attorney General Jeff Sessions in the face of mounting Democratic calls for his resignation – after reports showed he spoke with the Russian ambassador, despite testimony that he did not have “communications” with Moscow.

Republicans have split, meanwhile, on the question of whether Sessions should recuse himself from a Russia investigation. The top-ranking congressional Republican, House Speaker Paul Ryan, said Thursday he doesn’t see a purpose in recusal unless Sessions is the subject of the investigation.

He told reporters he’s seen “no evidence” of collusion between the Trump campaign and the Russians, and “Democrats are lighting their hair on fire to get you to cover this story.”

A White House official, in a statement, described Democrats’ demands as a “partisan” attack, suggesting the controversy is timed to distract from the positive response to President Trump’s address to Congress earlier this week.

“This is the latest attack against the Trump administration by partisan Democrats. [Attorney General] Sessions met with the ambassador in an official capacity as a member of the Senate Armed Services Committee, which is entirely consistent with his testimony,” the official said.

In a statement to Fox News, the former Alabama Republican senator said, "I never met with any Russian officials to discuss issues of the campaign. I have no idea what this allegation is about. It is false."

While Sessions is denying he specifically discussed campaign issues with the Russians, The Washington Post first reported that he did speak twice last year with Russian Ambassador Sergey Kislyak. One discussion, in July, was described as involving a group of ambassadors after a Heritage Foundation event on the sidelines of the Republican National Convention. Kislyak was part of a “small group” of diplomats who approached Sessions and spoke with him.

A subsequent meeting was held in September in the senator’s office. Justice officials said Sessions met with ambassadors in his capacity as a member of the Senate Armed Services Committee.

But while Sessions was serving on the Senate Armed Services panel, he also was a prominent surrogate for then-candidate Donald Trump. And in Senate testimony, Sessions denied contacts with the Russians.

Asked by Sen. Al Franken, D-Minn., at that hearing what he’d do with evidence that anyone tied to the campaign communicated with Russia last year, Sessions said: “I'm not aware of any of those activities. I have been called a surrogate at a time or two in that campaign and I … did not have communications with the Russians, and I'm unable to comment on it.”

The Post noted that Sessions also responded, “No,” in a written answer when asked whether he’d been in contact with any part of the Russian government regarding the election.

Officials told the Post Sessions did not consider his discussions relevant and did not recall details of what was discussed with the ambassador from Russia.

White House Press Secretary Sean Spicer, speaking with “Fox & Friends’” Abby Huntsman, also said Sessions “did his job” as a senator. He said Sessions was “100 percent straight with the committee” and Democrats are playing politics.

“There was absolutely nothing misleading about his answer,” Sessions spokeswoman Sarah Isgur Flores said in a statement. “Last year, the senator had over 25 conversations with foreign ambassadors as a senior member of the Armed Services Committee, including the British, Korean, Japanese, Polish, Indian, Chinese, Canadian, Australian, German and Russian ambassadors. He was asked during the hearing about communications between Russia and the Trump campaign -- not about meetings he took as a senator and a member of the Armed Services Committee.”

According to a schedule provided to Fox News, Sessions had 30 meetings with numerous ambassadors from April 14 through Nov. 11. Russia appears on the schedule only once – the Sept. 8 meeting with Kislyak. The day before, Sessions also took a meeting with Ukraine Ambassador Valeriy Chaly. These meetings took place a week before a seven-day unilateral ceasefire plan was accepted by Russia on behalf of separatist rebels it backed in the conflict with Ukraine.

But for Democrats, the revelations of any Russia discussions only served to fuel long-running accusations that Trump-tied officials have sought to conceal past contacts with Moscow. Earlier this month, Michael Flynn resigned as national security adviser amid accusations he misled Vice President Pence and others over his contact with the Russian ambassador.

“Jeff Sessions lied under oath during his confirmation hearing before the Senate,” she said. “Attorney General Sessions has never had the credibility to oversee the FBI investigation of senior Trump officials’ ties to the Russians. That is why Democrats have consistently called for Sessions to recuse himself from any oversight of the investigation. Now, after lying under oath to Congress about his own communications with the Russians, the attorney general must resign.”

All Democrats on the House Judiciary Committee wrote to FBI Director James Comey and the U.S. attorney for the District of Columbia urging a criminal probe.

Others, including Franken, have called for Sessions at least to recuse himself from a DOJ Russia investigation. The Wall Street Journal reported that investigators previously examined contacts between Sessions and Russian officials.

The critical factor may be what top congressional Republicans say next.

Rep. Jason Chaffetz, R-Utah, chairman of the House oversight committee, tweeted: “AG Sessions should clarify his testimony and recuse himself.”

Sen. Rob Portman, R-Ohio, also said: "Jeff Sessions is a former colleague and a friend, but I think it would be best for him and for the country to recuse himself from the DOJ Russia probe."

Asked about such requests, Sessions told NBC, “I’ve said that whenever it’s appropriate, I will recuse myself, there’s no doubt about that.”