We are not skipping any steps on safety or effectiveness of coronavirus vaccines: Admiral Giroir

The Assistant Secretary for Health and HHS tells 'America's Newsroom' the way to end the coronavirus pandemic is through the vaccine.

Members of the White House Coronavirus Task Force clashed Monday over new lockdown orders in California, with Dr. Anthony Fauci saying state officials didn’t have “any choice,” and Admiral Brett Giroir arguing that the “evidence” and “science” do not support shutdowns, calling them “counterproductive,” as cases of COVID-19 surge in California.

Gov. Gavin Newsom imposed a strict stay-at-home order over the weekend after the state fell below 15% capacity in intensive care units. Newsom warned last week that the lockdown would be triggered regionally when ICU capacity dipped under that level.

The new order, the most restrictive since March, would close hair salons, bars and indoor dining and allow retail to operate at only 20% capacity, among other restrictions, and would last for at least three weeks — covering the Christmas holiday.

“We are at a tipping point in our fight against the virus and we need to take decisive action now to prevent California’s hospital system from being overwhelmed in the coming weeks,” Newsom said last week. “By invoking a Stay at Home Order for regions where ICU capacity falls below 15 percent, we can flatten the curve as we’ve done before and reduce stress on our health care system.

"I’m clear-eyed that this is hard on all of us — especially our small businesses who are struggling to get by," he continued. "That’s why we leaned in to help our small business owners with new grants and tax relief to help us get through this month.”

Fauci, whom President-elect Joe Biden tapped as senior medical adviser, in addition to continuing to serve in his decades-long post as director of the National Institutes of Allergy and Infectious Diseases, said Monday that he told California authorities that he agreed with their move to impose new lockdowns.

“I said, ‘you know, you really don’t have any choice,’” Fauci said on CNN Monday. “When you have the challenge to the health care system, you’ve got to do something about that.” 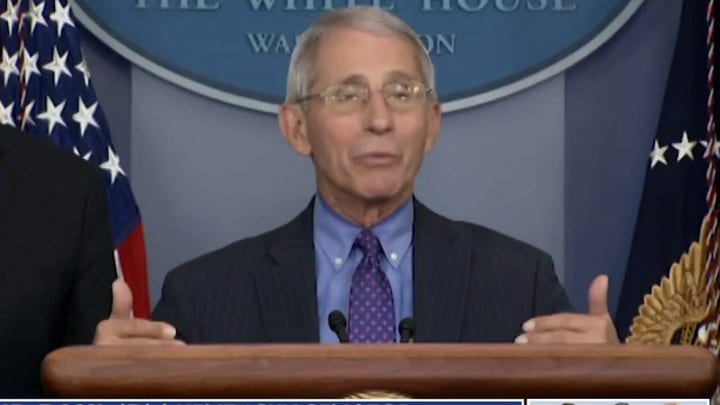 But Giroir, the assistant secretary for Health and Human Services, also a member of the White House Coronavirus Task Force, said he hasn’t seen “any data that says you need to shutdown outdoor dining or outdoor bars.”

“We really wanted to limit the indoor crowded places,” Giroir explained on “America’s Newsroom.” “I think we need to do what’s necessary to turn the pandemic, but not more that’s not evidence-based — that’s going to be counterproductive.”

Giroir said that “the science does not say that,” while saying that Fauci, and others on the task force agree.

CDC URGES UNIVERSAL MASK USE WHILE INDOORS AMID CORONAVIRUS SURGE

“The science does not support limiting indoor dining and bars,” he said again, adding that there are many restaurants that have taken “tremendous” measures to distance tables, and add plexiglass.

“I’d like to see a little more individual attention to these places that have invested a lot of money and are probably safer than having a house party with a hundred people,” Giroir said.

Giroir added: “It’s time to nuance. This is not March or April. This is December. We know what the science says, we know there are countermeasures that are effective.”

Giroir also warned that lockdowns could be “causing a lot more harm.”

“Whatever the expression is, throwing the baby out with the bathwater, I think we could be causing a lot more harm by overly restrictive recommendations that are not supported by the science,” he said. “What I am saying is the evidence clearly does not support limitations on things like outdoor dining particularly that are spaced, outdoor bars — the evidence just isn’t there.”

He added: “Shutting down completely, particularly if you don’t have evidence, can be counterproductive.”

Giroir went on to urge officials to “do what’s necessary and evidence-based,” while again warning that “when you do more, it frustrates the population because it’s not evidence-based.”

Members of the White House Coronavirus Task Force have clashed on the topic of lockdowns throughout the pandemic — with President Trump’s special adviser on coronavirus Dr. Scott Atlas repeatedly calling for an end to lockdowns and warning of their danger.

Atlas, who was on a 130-day detail as a Special Government Employee (SGE), resigned from his post last week — just days before the detail was set to expire.

In his resignation letter, first obtained by Fox News, Atlas, who had been criticized throughout his tenure for calling for a reopening, and saying that lockdowns are “extremely harmful” to Americans, said that “although some may disagree with those recommendations, it is the free exchange of ideas that lead to scientific truths, which are the very foundation of a civilized society.”

“Indeed, I cannot think of a time where safeguarding science and the scientific debate is more urgent,” Atlas said.

Atlas, in his resignation letter, also warned against lockdowns, saying that they “identified and illuminated early on the harms of prolonged lockdowns, including that they create massive physical health losses and psychological distress, destroy families and damage our children.”