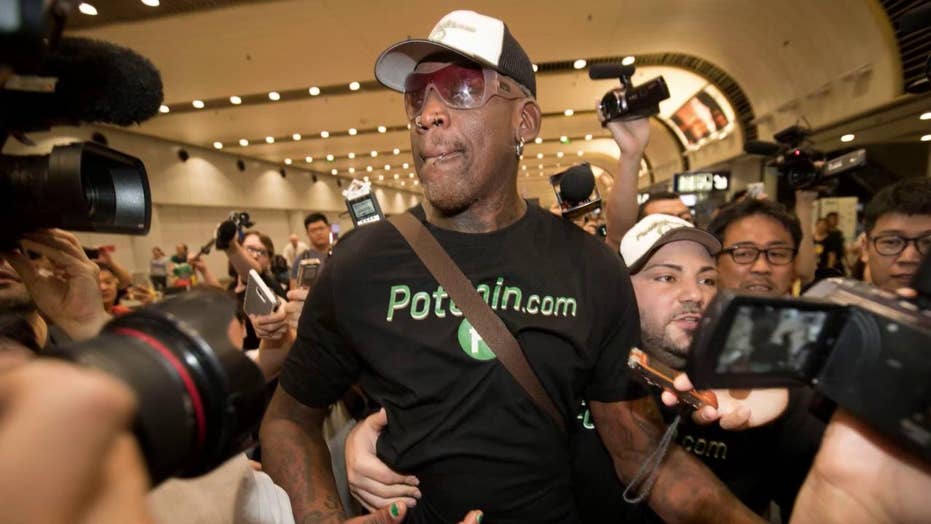 Dennis Rodman broke down in tears on CNN

NBA star and friend of Kim Jong Un, Dennis Rodman, sobbed through an interview with CNN while reacting to the summit between President Trump and the North Korean dictator.

Dennis Rodman, the former NBA star and longtime friend of Kim Jong Un who has visited North Korea several times, broke down in tears during a televised interview early Tuesday as President Trump and Kim held a historic meeting in a hotel on Singapore's Sentosa Island.

Five years ago, Rodman said, Kim told Rodman "certain things" to relay to Obama concerning potential negotiations, but the former president "didn't even give me the time of day -- he just brushed me off, but that didn't deter me."

Rodman, who admitted he was "naive" when he first visited the rogue regime, then started weeping and repeatedly dabbed away tears from his eyes as he recounted the blowback he received in the U.S. for visiting Kim.

It was a sharp turn in an interview that started with Rodman offering some advice to Trump in the form of an anecdote about trust.

"President Trump should understand the fact that the reason the Marshal of North Korea [Kim Jong Un] respects Dennis Rodman is the fact that he trusts me, and I gave him something for his birthday -- and I thought I couldn't pull this off -- and I said the day before his birthday, I'm gonna give you a present."

Rodman said he promised to bring a professional basketball team to North Korea, "even though I knew I couldn't do it."

DENNIS RODMAN ARRIVES IN SINGAPORE AHEAD OF HISTORIC SUMMIT

But Rodman said he quickly realized that he needed to make good on his promise, or there would be a "problem."

After helping train North Korean basketball players and arranging to bring ex-NBA players to the country, according to Rodman, Kim approached him to say, "Dennis, you know, this is the first time someone ever kept their word to me in this country."

The moment was emotional, Rodman said. He encouraged Trump to show his "heart" to Kim -- a dictator who Rodman described as a "big kid" who just wants to have "fun."

Rodman then gave a hasty shout-out to Potcoin, a digital currency that caters to the cannabis industry and community, for sponsoring his trip to Singapore.

"If Trump can pull this off, more power to him."

"If Trump can pull this off, more power to him," Rodman said.

Trump reached out to Rodman before the summit through a secretary to tell Rodman he is "very proud" of him, the basketball star claimed.

"We don't need a miracle, but we need the doors to be open so we can start fresh," Rodman said of the historic meeting between the two leaders.

"Donald Trump should take a lot of credit for this. He went out the box and made this happen," Rodman added.

Rodman previously has spoken fondly of the North Korean dictator, even calling Kim “misunderstood” despite admitting that the despot is probably a “madman.”

Rodman frequently visited Kim in North Korea starting in 2013, when he held the despot’s newborn daughter who has never been seen in the public.

Rodman’s history with Trump is fairly brief. He’s twice appeared on “Celebrity Apprentice” and he gave a copy of Trump’s “Art of the Deal” to the North Korean sports minister during a visit to Pyongyang last June. Rodman has hoped to be the one to facilitate a relationship between Trump and Kim.