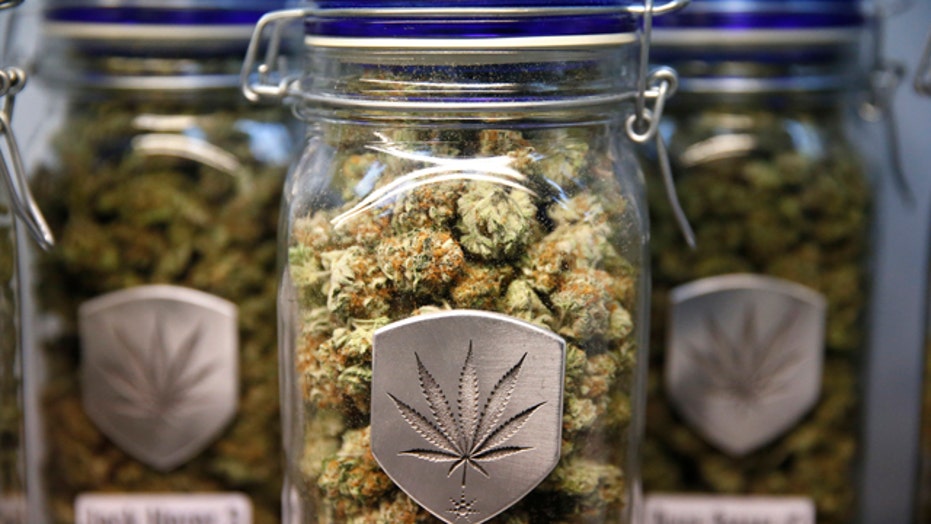 What's the next state to legalize marijuana?

While candidates and parties duke it out for victory on Election Day, a just-as-heated battle is being waged in a number of states over guns, abortion, booze, marijuana -- even bears.

Ballot initiatives often are the sidebar story of any election, but for some voters the debate this year over "yes" or "no" on a range of ballot questions has been the marquee issue, drawing millions of dollars to each side and, in some cases, forcing candidates running in those states to take a position.

One of the highest-profile battles, again, is over weed. After Colorado and Washington became the first states to effectively legalize -- and regulate -- non-medical marijuana in the last election, the pro-pot movement is trying to expand the legal weed map next week. Unlike several past elections, gay marriage is not on the ballot this year. But other social and economic hot buttons, including the minimum wage, are.

According to election-tracker Ballotpedia, voters are weighing in on 153 ballot measures on Election Day.

Marijuana bans up in smoke?

Two years ago, voters in Colorado and Washington legalized recreational pot statewide, and the federal government largely has stayed out of their business. On Nov. 4, Oregon (which voted down such a measure in 2012), Alaska and the District of Columbia will ask voters whether they, too, want to join the marijuana legalization experiment.

Pro-marijuana voices like Morgan Fox at the Marijuana Policy Project say the prospects for legalization are looking good. Polls have shown voters in Oregon and D.C. largely support the measures, though voters' views toward legalizing weed in Alaska are still a bit hazy.

Florida, with its huge senior community, also has a question on the ballot on legalizing medical marijuana.

"They all seem like they are pretty close except, for D.C., which has overwhelming support," Fox said.  "But I think they all stand a very good chance of passing." Last week, Sen. Jeff Merkley, D-Ore., became the first U.S. senator to support marijuana legalization for his state.

Drug Policy Action, which has received major funding from billionaire currency trader George Soros, contributed $500,000 to the Yes on 91 campaign in Oregon. Washington D.C.-based New Approach PAC, tied to the family of the late billionaire Peter Lewis, gave $300,000 to the effort.

"You have millions of dollars poured in to the 'yes' side and on the 'no' side, you just have a lot of volunteers from citizens and groups that don't traditionally have a lot of money. They are trying to manipulate from the outside."

End of the dry spell?

There aren't many places that still ban alcohol, though 10 states, including Arkansas, still have areas that do. A ballot initiative that would legalize booze statewide is pitting big fundraising guns at Wal-Mart (which wants to want to end prohibition) against the liquor dealers (who want to keep it). It promises to be a big draw on Nov. 4.

According to local reports, 37 out of Arkansas' 75 counties prohibit the sale and purchase of alcohol. Business interests like Wal-Mart want to be able to sell beer and wine over the counter everywhere in Arkansas. Liquor dealers who operate shops just outside dry counties have lined up to defeat the measure, known as Issue 4.

Following the elementary school shooting massacre at Sandy Hook and other high-profile tragedies involving firearms, gun control advocates have been pouring cash into legislative efforts as well as ballot initiatives. Washington state has two dueling gun measures at the ballot box on Nov. 4. If both win, it likely will tie up the issue in court.

Initiative 594 calls for a comprehensive tightening of the state's background check policies -- requiring background checks for virtually all purchases, including online and gun-show sales.

Opponents, including the National Rifle Association (NRA), have been vastly outspent as the campaign heads into the last week. According to a report in September, the pro-I-594 funders, including former New York City Mayor Mike Bloomberg and Bill and Melinda Gates, have given $7.5 million toward its passage.

Competing measure I-591 is supported by gun rights advocates and would do the opposite by barring the state from enacting its own background-check laws, deferring to the federal government on that front. It also would prohibit government agencies from seizing guns without due process.

A ballot initiative drawing major national attention in Maine would restrict the way residents can hunt for bears. Right now, hunters can use a range of tactics to kill their quarry -- from trapping and chasing them down with dogs, to baiting them with sweets, like jelly doughnuts. All three methods would be banned if Question 1 passes. Maine hunters would have to stalk and shoot bears the old-fashioned way, which is more humane, proponents say. Critics say it would balloon Maine's bear population.

Both sides have spent some $1.6 million on TV ads to persuade the public.

Three state measures would challenge some abortions. In Colorado, voters will decide whether to amend the state constitution to define the fetus as a person under the criminal code. In North Dakota, voters weigh the question of whether the state constitution should protect the rights of the unborn. In Tennessee, a measure would make it easier for the state to pass restrictions on abortion.

In California, voters will decide whether to require doctors to submit to drug-testing, the first such policy in the country. Proposition 46 also would raise the cap on pain-and-suffering awards. Proponents say it would be a win for patients, while critics say it all amounts to a grab by tort lawyers.

Prison over-crowded California is weighing Prop 47, which would dramatically change how the state treats certain "nonserious, nonviolent" drug and property crimes, by downgrading them from felonies to misdemeanors.

The measure also would allow those currently serving time for such offenses to apply for a reduced sentence, as long as they have no prior convictions for more serious crimes like murder, attempted murder or sexual offenses.