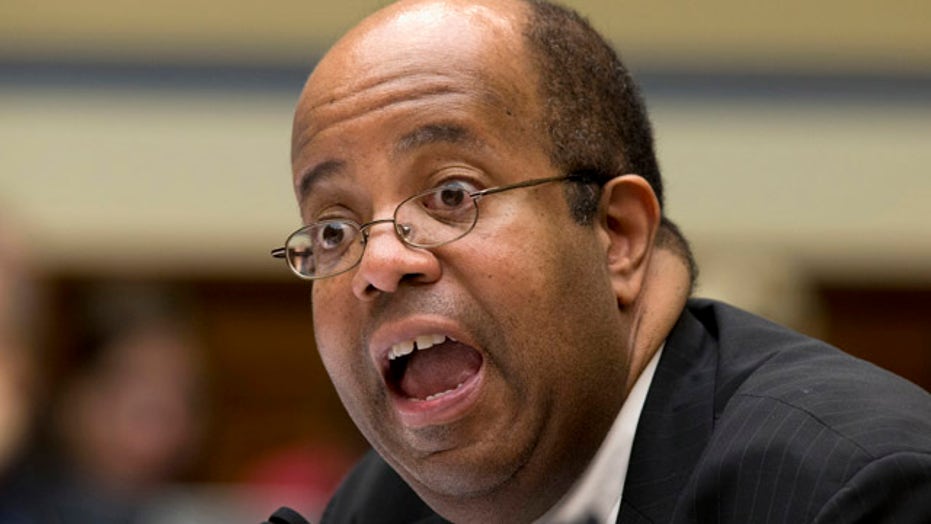 The government watchdog who issued the report that found the IRS was targeting conservative groups was turned into a punching bag by Democrats in the second half of a tense hearing Thursday, leading Inspector General J. Russell George to chide lawmakers for their attacks on his office.

“This is unprecedented,” he said of his treatment before the House Oversight and Government Reform Committee at the end of the hearing.

The first half of the hearing was devoted to testimony from IRS officials who claimed higher-ups in Washington, D.C., were involved in applying additional scrutiny to Tea Party and other groups.

But the second half featured George and his associates, and ended up becoming a forum for Democratic lawmakers to accuse him of effectively ignoring potential signs that liberal groups may have been targeted as well. They pointed in part to IRS documents that suggest “progressive” groups may have been singled out.

George, though, said he didn’t see one of those packets until last week. He said he was “disturbed” it took so long for the IRS to produce the documents.

But George has also said all along that the evidence mostly pointed to conservative groups receiving the most scrutiny. He bristled at the tough questioning from Democrats which repeatedly second-guessed his office’s audit of the IRS’ practices.

“I have to admit, I am a little concerned that this type of forum could have a chilling effect on the operations of inspectors general,” George said, referring specifically to the second-guessing of how the audit was run.

He added: “We’ve never treated an IG office like this.”

This prompted a heated retort from the committee’s leading Democrat, Rep. Elijah Cummings, D-Md., who raised his voice and was at times almost shaking as he vowed to uncover the “whole truth.” He claimed nobody was trying to attack the IG.

Chairman Darrell Issa, R-Calif., chairman of the committee, said at the top of the hearing that the committee is open to examining any “credible” questions surrounding inspectors general, but as of now "stand solidly behind" their efforts.

Republicans also pointed out that while Democrats claim progressive groups may have been targeted, they have not come forward to complain about their treatment at the hands of the IRS like Tea Party groups have.

Earlier Thursday, a veteran IRS worker testified that officials from a Washington office led by a political appointee intervened in the screening of Tea Party applications, saying publicly for the first time the IRS chief counsel's office was involved in the controversial program.

Carter Hull, a recently retired tax law specialist,  had earlier come under scrutiny after an employee in the Cincinnati IRS office told congressional investigators that he had been micro-managing her review of Tea Party groups' applications for tax-exempt status. But Hull revealed that he, too, was taking orders from up the chain of command.

Hull specifically said he was told to forward documents to an adviser for embattled IRS official Lois Lerner -- who first revealed the targeting of Tea Party groups and has since refused to answer lawmakers' questions. But Hull said he was then told to send documents to the Office of Chief Counsel for their review -- which is led by political appointee William Wilkins.

At an August 2011 meeting, Hull said, someone from the chief counsel's office said additional information was needed from Tea Party applicants that Hull was dealing with, and that a second letter should be sent out requesting more information.

These letters have since been cited by Tea Party groups as part of a drawn-out process that in some cases left them without any resolution for years.

Hull said during his testimony that the multi-level layer of review was "unusual." And he said the Cincinnati office was stuck on applications because he, too, was waiting for guidance from the chief counsel's office.

"I was waiting for word from chief counsel as to how to proceed," Hull said.

Hull repeatedly said that he was not told specifically to hold up applications. But he confirmed that after meeting with the chief counsel's office, applications were eventually taken out of his control and forwarded on for "further review," which he said was "rare."