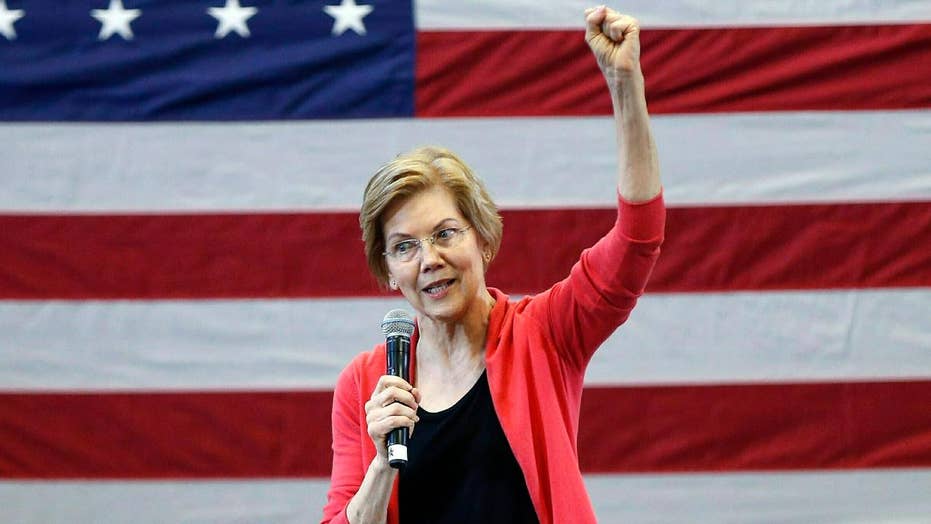 Majority of millionaires back Warren’s wealth tax for those worth $50M or more according to a new poll; GOP financier Dan Palmer weighs in.

As the progressive wing of the Democratic Party pushes an agenda that asks millionaires and billionaires to pay higher taxes to fund ambitious social programs, 2020 hopeful Elizabeth Warren has made an unprecedented tax proposal on accumulated wealth a centerpiece of her campaign.

And nearly a year into her presidential bid, that wealth tax has become a central funding mechanism for a host of major policy proposals — despite lingering doubts about its constitutionality and whether it can generate the cash flow she promises. Warren has connected the wealth tax to no fewer than eight separate initiatives:

"We can raise the wages of every childcare worker and preschool teacher in America. We can put $800 billion new federal dollars into all of our public schools. We can make college tuition-free for every kid, we can put $50 billion into historically black colleges and universities," Warren said of what she would do with the revenue from a wealth tax during the Democratic primary debate in November. "We can invest in an entire generation."

Warren's current iteration of a wealth tax, which she terms an "Ultra-Millionaire Tax," would require families to pay a 2 percent levy for every dollar of their net worth over $50 million and force billionaires to cough up 6 percent of their net worth over $1 billion. Her original plan would've taxed 3 percent of families' wealth over $1 billion, but after being pressed on how she would fund "Medicare-for-all," Warren announced that billionaires would be required to pay a 6 percent wealth tax to help fund the program.

Warren's policy is slightly less ambitious than a similar plan introduced by Sen. Bernie Sanders, I-Vt., her main adversary, as she courts the progressive wing of the party. Both argue a wealth tax would make the U.S. tax system more fair than the current one, which taxes income but does not go after money people already have.

"Our tax code focuses on taxing income, but a family’s wealth is also an important measure of how much it has benefitted from the economy and its ability to pay taxes," Warren's campaign website reads. "And judged against wealth, our tax system asks the rich to pay a lot less than everyone else.... [T]he families in the top 0.1% are projected to owe 3.2% of their wealth in federal, state, and local taxes this year, while the bottom 99% are projected to owe 7.2%."

Warren sees this untaxed accumulated wealth as a source of funding for a wide variety of programs, but those on the right, and even some on the left, are skeptical about how effective a wealth tax would be, or even if it's legal.

Writing for Fox News earlier this year, Heritage Foundation research associate Joel Griffith argued that while the Constitution permits direct taxes on individuals "if they are equally apportioned along with excise taxes and duties," it is doubtful that a wealth tax would survive constitutional scrutiny.

"The Constitution does not specifically empower Congress to adopt a wealth or asset tax (as with the Sixteenth Amendment), an asset tax cannot be 'equally apportioned' (by definition, it takes only from the better off), and possessing wealth or assets is not, by definition, a 'transaction' (any more than owning a home is)," Griffith wrote. "In fact, seizing this private property without just compensation would clearly violate the Fifth Amendment Takings Clause."

Griffith also argued a wealth tax would create "economically destructive distortions by artificially diverting capital from investment to consumption." The result, Griffith says, would cause wealthy people, "to consume their wealth rather than invest and grow it."

Griffith says that those investments by entrepreneurs are what truly fuels the American economy, not just consumption. He also wrote that 10 of the 14 Organisation for Economic Co-operation and Development countries to try wealth taxes in the past 23 years subsequently got rid of them.

"The tax the way we're putting it forward right now, the wealth tax, I'm sorry it's cumbersome, its been tried by other nations, it's hard to evaluate. We can get the same amount of revenue through just taxation," Booker said in a heated exchange with Warren. "But again, we as Democrats, have got to start talking not just about how you tax from a stage, but how we grow wealth in this country amongst those disadvantaged communities that are not seeing it."

According to Warren's own analysis, a wealth tax would generate $3.75 trillion in 10 years for the U.S. government. Those numbers, however, have been disputed.

Marc Goldwein, the senior vice president and senior policy director for the non-partisan Committee for a Responsible Federal Budget, said there are several factors that could result in the wealth tax bringing in significantly less than Warren's projected $3.75 trillion.

'If we think we’re going to get 100 percent of our expected tax base, that’s a little bit of a fantasy because people will take measures to avoid the tax including some that aren’t even what you’d think of as tax avoidance.'

"If we think we’re going to get 100 percent of our expected tax base, that’s a little bit of a fantasy because people will take measures to avoid the tax including some that aren’t even what you’d think of as tax avoidance, just like spending the money or giving it to charity," he told Fox News.

This could frustrate Warren's "anti-evasion measures" she says would keep money in the U.S. and prevent those subject to the wealth tax from dodging it. Goldwein said the 15 percent avoidance rate baked into Warren's numbers is likely low.

He also mentioned that Warren's wealth taxes could see diminishing returns over time.

Goldwein also noted that Warren seems to view a wealth tax as something to add to other ways of taxing capital income, like her proposed mark-to-market tax (a tax on investments that increase in value), rather than a replacement to such levies as other countries have done. This, he said, could cause interactions between the policies that reduce the returns for both.

A recent analysis, from the University of Pennsylvania’s Penn Wharton Budget Model, also found the Warren wealth tax would bring in at least $1 trillion less than projected over 10 years — or somewhere between $2.3 trillion and $2.7 trillion.

Meanwhile, the study said the tax would cause the economy to shrink over the next 30 years.

But whether a wealth tax would be an effective source of funding or a drag on the economy, the concept fits neatly into the current narrative of the progressive wing of the Democratic Party and follows with the voting public's general desire to soak the rich.

"I'm tired of free-loading billionaires," Warren tweeted last month. "My #WealthTax asks them to pitch in a little more, so that every family can have a shot at the American dream."