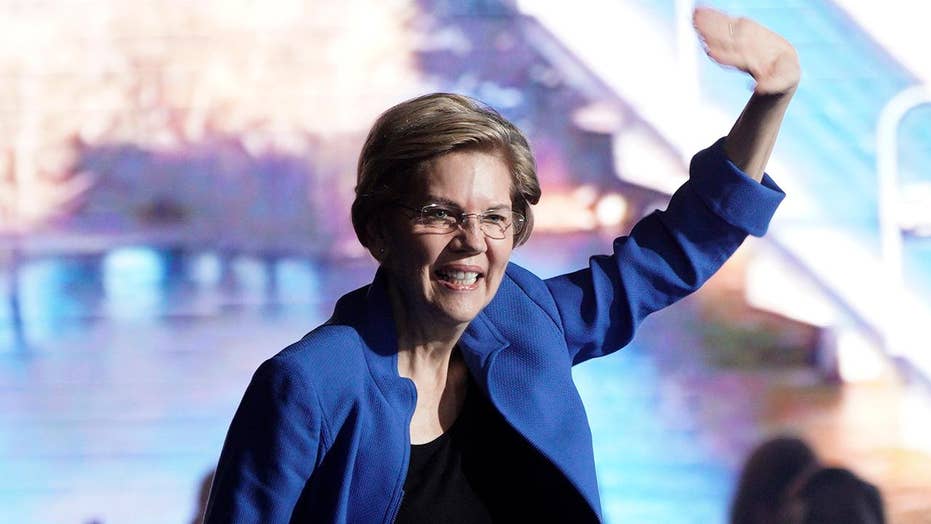 For many Democrats, presidential candidate Elizabeth Warren's agenda is a window on just how far left the party has moved; Doug McKelway reports.

Elizabeth Warren has a plan for that. And often, she's got a new federal agency for that, too.

A Fox News analysis of the Democratic presidential candidate's myriad and much-touted plans reveals that Warren's ambitious agenda of policy prescriptions would not only prompt sweeping change in everything from health care to clean energy, but would come with the creation of at least 20 offices, bureaus, agencies, divisions or councils.

Some of these are entirely new; some would replace existing agencies, only on a bigger scale; and some would represent a relaunch of old agencies disbanded years ago. Taken together, what is proposed is a significant expansion in the size of the federal bureaucracy.

If elected president, Warren vows she'll oversee the establishment of new offices that would be responsible for educating members of Congress on technology, investigating ethics violations, ensuring the U.S. is trading with green countries and much, much more.

For instance, a new Secure Democracy Administration would have the power to take over the administration of federal elections from state governments that run afoul of certain standards. A White House Budgetary Office of Tribal Affairs would "track and advance" Native American-related spending.

From Warren's perspective, it's just more evidence of the detail-rich policy pitch that has defined her candidacy. But Republicans see more evidence of an over-reliance on big government -- and a political liability.

"No surprise that Elizabeth Warren wants to expand unnecessary government bureaucracy on top of her radical socialist proposals," Sarah Matthews, the deputy press secretary for President Trump's re-election campaign, told Fox News. "Despite what Elizabeth Warren may think, more big government isn’t the solution. President Trump believes our government should be smaller, smarter, and more efficient which is why he has delivered on his campaign promise to shrink the federal bureaucracy and get the government off the backs of the American people."

Democratic presidential candidate Sen. Elizabeth Warren, D-Mass., listens to a question during the question and answer part of her campaign event Wednesday, Oct. 30, 2019, at the University of New Hampshire in Durham, N.H. (AP Photo/ Cheryl Senter)

Most of the new offices are explicitly outlined in Warren's campaign literature. But the total could be higher. At least one office -- the Office of United States Corporations -- is prescribed in a Warren bill linked to one of her campaign proposals, though the office is not mentioned on the campaign site.

Warren's fondness for government agencies is hardly a secret. Her affiliation with one is part of her personal narrative. She mentions repeatedly on her site that she was one of then-President Obama's top advisers while his administration was creating the Consumer Financial Protection Bureau.

"Even though she wasn’t even in Congress at the time, she fought for the agency, built public support for it, and Barack Obama signed it into law in 2010," Warren's campaign website states. "She then helped build the agency up from scratch. Now that agency, the Consumer Financial Protection Bureau, has returned $12 billion directly to consumers scammed by financial institutions."

The Warren campaign did not respond to a request for comment for this report.

Below is the full list of entities Warren says she would create:

CONSERVATIVE GROUP'S STUDY: 'MEDICARE-FOR-ALL' WOULD WORSEN FINANCIALSITUATIOMN FOR MAJORITY OF US HOUSEHOLDS

But Warren's plans don't just create offices. She further advocates for a litany of commissions, programs and positions that also would expand the scope of other parts of the federal bureaucracy.

She proposes a commission on disability rights that would ensure federal disaster spending is ADA compliant, a "diplomatic equivalent of the ROTC program" and a Special Envoy for the Human Rights of LGBTI Persons, to name a few.

All these government entities would need to be funded, which would mean additional spending on top of other costly benefit programs ranging from "Medicare-for-all" to student debt cancellation.

Warren has called for "big structural change," as a cornerstone of her campaign as she competes with Bernie Sanders -- a self-identified Democratic socialist -- for more progressive and liberal voters in the Democratic primary. Some Democrats, however, have worried that her expansive vision will turn away moderates and independents.

Fellow 2020 hopeful Sen. Cory Booker, D-N.J., hit Warren on one of her more controversial policies -- a 2 percent wealth tax on individuals worth more than $50 million -- during the Democratic presidential debate in Atlanta last week.

"The tax the way we're putting it forward right now, the wealth tax, I'm sorry it's cumbersome, it's been tried by other nations, it's hard to evaluate. We can get the same amount of revenue through just taxation," Booker said in a heated exchange with Warren. "But again, we as Democrats, have got to start talking not just about how you tax from a stage, but how we grow wealth in this country amongst those disadvantaged communities that are not seeing it."

Warren's website says she would use the wealth tax to help fund many of her proposals. However, conservatives decry Warren's embrace of more government agencies and programs as a move in the wrong direction.

"It would take an army of bureaucrats and vastly more spending to realize Senator Warren’s command and control aspirations," said Romina Boccia, director of the conservative Heritage Foundation's Grover M.Hermann Center for the Federal Budget.

She also warned that the "swamp" President Trump vowed to drain still bubbles with bureaucracy: "President Trump’s administration continues to have success in draining the swamp through deregulation. And yet, we’ve also seen vast, irresponsible spending increases that feed the swamp. Returning power to the people must include starving the bureaucratic beast, which means holding the line on spending."