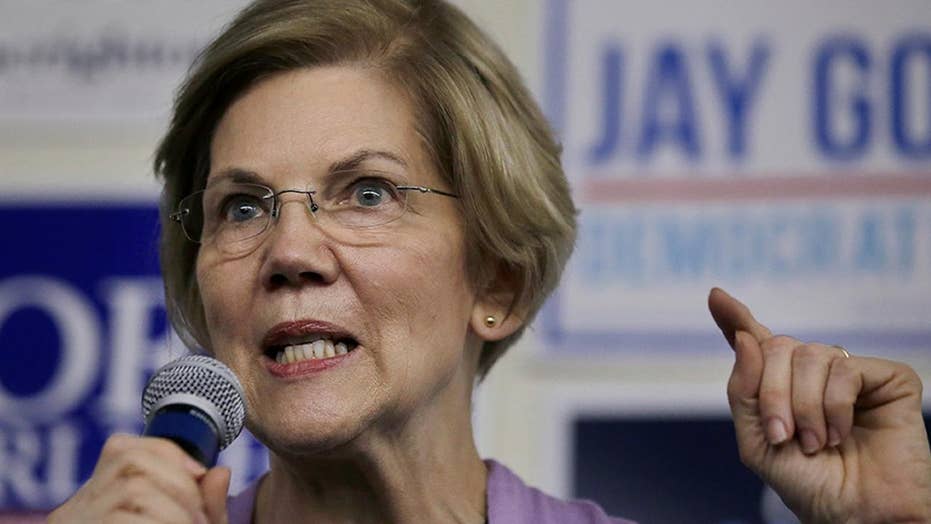 What to know about 2020 presidential hopeful Senator Elizabeth Warren (D-MA) including the major issues she advocates and what issue she may still need to overcome.

Whenever Sen. Elizabeth Warren, D-Mass., is asked how she’ll fund “free” college tuition and her many other promised goodies, she has a ready answer: a tax. Specifically, she wants the federal government to impose a 2 percent annual tax on accumulated wealth in excess of $50 million.

This is hardly a new idea. Of the 14 wealthy OECD countries with a wealth tax in 1996, 10 have since then abandoned it. With good reason: this wealth tax is economically destructive.

Even if it weren’t, a pure wealth or asset tax would be unconstitutional. Even CNN, in its fact-checking of Warren’s tax, couldn’t ignore this, noting “there are several procedural problems with the proposal, including its legality.”

Here’s why. States have a general “police power”— that is, a general authority to enact laws regulating private conduct—but Congress does not. Congress has only the specific legislative authority that the Constitution grants it, and the three relevant provisions do not authorize Congress to adopt a wealth or asset tax.

Finally, Article 1, Section 8, permits Congress to adopt indirect taxes in the form of excise taxes on specific goods or transactions. Supreme Court precedent (see Knowlton v. Moore) explains that the estate tax is one such permissible indirect tax, because it is a duty imposed on a transfer of property predicated by death.

Proponents of the wealth tax ignore the fact that real income over the past 40 years has risen for those at the bottom, middle, and top of the income spectrum.

Those forms of taxation are far different than a tax on property or assets. The Constitution does not specifically empower Congress to adopt a wealth or asset tax (as with the Sixteenth Amendment), an asset tax cannot be “equally apportioned” (by definition, it takes only from the better off), and possessing wealth or assets is not, by definition, a “transaction” (any more than owning a home is). In fact, seizing this private property without just compensation would clearly violate the Fifth Amendment Takings Clause.

But even if it were constitutional, a wealth tax would be a huge mistake. Such a tax creates economically destructive distortions by artificially diverting capital from investment to consumption. Our economic system produces a cornucopia of supply unparalleled in terms of choices, widespread attainability, and overall level of abundance. Although consumption is a healthy part of human existence, a continued increase in this supply requires capital for technological innovation and implementation. The risks undertaken by entrepreneurs, investors, and business leaders with capital ultimately increase productivity.

In other words, society enjoys more supply per for each hour of labor or dollar of capital. This translates into real quality of life improvements for those across all income levels. Top innovators in technology, finance, transportation, energy, and medicine generate income and accumulate capital not by exploiting the masses but by delivering value to others.

Consider the impact of Bill Gates (Microsoft), Steve Jobs (Apple), Jeff Bezos (Amazon), and Travis Kalanick (Uber) over the past 30 years. In the prior century, the fabulously wealthy world-changers included John D. Rockefeller (Standard Oil), Sam Walton (Wal-Mart), and Henry Ford. Choosing to punish rather than celebrate success harms the intended beneficiaries by incentivizing them to consume their wealth rather than invest and grow it.

The Urban Institute crunched the income data holding the class-defining real income and family size parameters constant since 1980. Seemingly in lock-step with conventional wisdom, the middle class did shrink from roughly 37 percent of the population in 1980 to 32 percent today. But the lower-middle and poor shrank by an even larger amount — from nearly 50 percent of the population to just 37 percent.

In our vibrant economy, one’s economic circumstances at birth need not define the future. In fact, more than 90 percent of those in the bottom tier of income-earners will earn more than their parents; only 70 percent of those in the highest tier will do so. A wealth tax would threaten this economic reality by suppressing the accumulation of capital needed to generate growth.

That’s three strikes against the wealth tax. It would violate the Constitution’s limits on the taxing power of Congress, harm economic growth by artificially diverting capital from investment to consumption, and ignore our history of a widespread increase in prosperity.

This planned redistribution of wealth may result in a more equally divided pie, but rich and poor alike would end up with smaller pieces in the longer term. Policymakers should consider the unintended consequences of this unconstitutional tax.

Joel Griffith is a research associate at the Heritage Foundation.