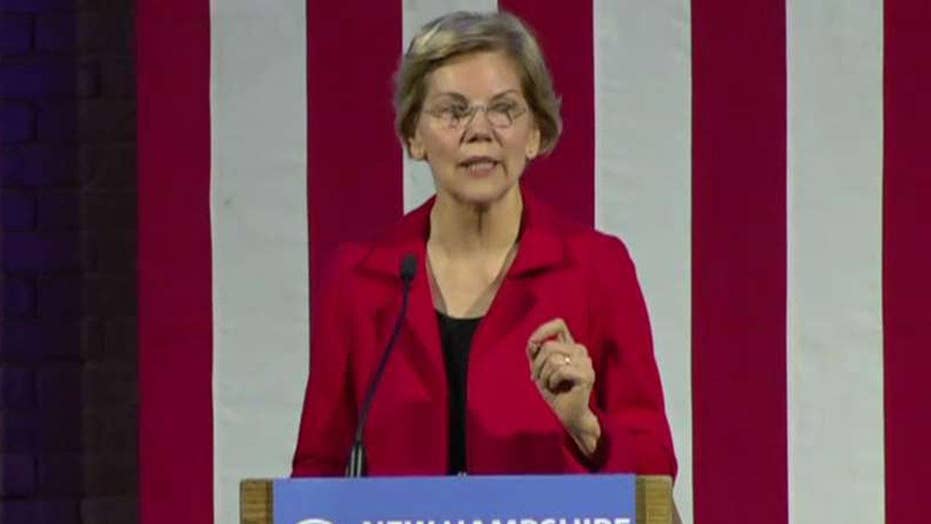 Is Wall Street fearful of a possible Elizabeth Warren presidency?

Martha MacCallum and Jesse Watters react during this week's 'Wednesdays with Watters' segment on 'The Story.'

Declaring that “it’s getting harder to save enough for a decent retirement,” Democratic presidential candidate Sen. Elizabeth Warren on Thursday unveiled a plan to increase monthly Social Security benefits by $200 for every current and future beneficiary.

The plan, which the Massachusetts Democrat touted as “the biggest and most progressive increase in Social Security benefits in nearly half a century,” was released hours before Warren joins nine of her 2020 rivals for the third-round Democratic primary debate.

WARREN SAYS DEMOCRATS 'CAN'T CHOOSE A CANDIDATE WE DON'T BELIEVE IN BECAUSE WE'RE SCARED,' IN LIKELY JAB AT BIDEN

“And here’s the even scarier part: unless we act now, future retirees are going to be in even worse shape than the current ones,” she stressed.

Warren’s proposal also calls for updating what she describes as “outdated rules to further increase benefits for lower-income families, women, people with disabilities, public-sector workers and people of color.”

The populist senator -- who has released one progressive policy proposal after another this year as she runs for the White House -- says she’ll pay for extending the solvency of Social Security by nearly two decades with revenues from her plan to tax the wealthiest Americans.

Zandi also claimed that Warren’s proposal – which calls for raising contribution requirements on the top earners and boosting average benefits by nearly 25 percent for those in the bottom half of income distribution – would produce a “much more progressive Social Security system.”

As Social Security recipients live longer, the number of beneficiaries is projected to surge to 80 million people. And a slowing population means fewer younger workers to pay into the system, raising solvency concerns.

The latest projections from the Social Security Board of Trustees indicate the reserves used to partially fund the system are expected to be depleted by 2035.