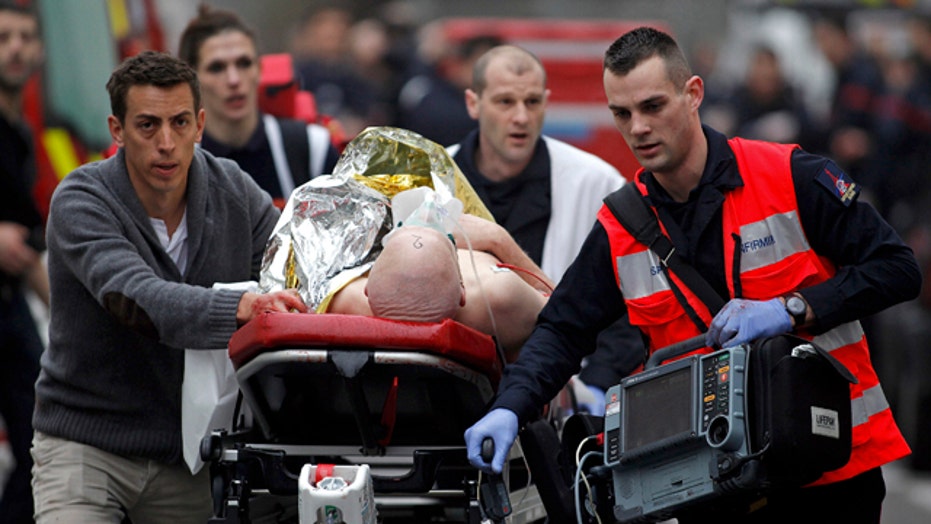 11 dead in attack in newspaper office

U.S. counterterrorism officials are reviewing databases of known terror suspects and other materials after the deadly Paris shooting Wednesday morning, as the Obama administration opened the door to increasing security in the U.S. in response.

The terror attack on a satirical French publication known for lampooning Islam left at least 12 dead, and the attackers remain at large. U.S. officials already are in touch with their French counterparts.

The attackers reportedly shouted "Allahu Akbar," Arabic for "God is great, before escaping.

Two French officials, speaking on condition of anonymity, named the suspects to the Associated Press as Frenchmen Said Kouachi and Cherif Kouachi, in their early 30s, as well as 18-year-old Hamyd Mourad, whose nationality wasn't immediately clear.

One of the officials said they were linked to a Yemeni terrorist network.

All three remain at large.

Cherif Kouachi was convicted in 2008 of terrorism charges for helping funnel fighters to Iraq's insurgency and sentenced to 18 months in prison.

Fox News is told investigators had been reviewing terror databases, including for individuals who have traveled to Syria. They also looked to closed-circuit television and evidence from the crime scene.

In addition to identifying the suspects, the focus will be on determining whether this is isolated or part of a series of attacks.

It is thought to be an attack carried out by a small cell, which distinguishes this from recent lone-wolf attacks, including one in Ottawa, Canada, and another more recent attack in Sydney, Australia. Officials are looking at the level of premeditation, given eyewitness accounts that the gunmen asked for individuals by name as they stormed the office.

In addition, Fox News is told the assailants showed skill and familiarity with their weapons, and their escape also showed premeditation.

A Department of Homeland Security official told Fox News that the department is "closely monitoring" the situation.

"DHS will not hesitate to adjust our security posture, as appropriate, to protect the American people," the official said, urging the public to report suspicious activity to law enforcement.

However, the office of the U.S. Embassy in France tweeted that there are "no plans" to close the embassy in Paris or other diplomatic facilities in France despite "misleading" press reports.

U.S. investigators are expected to get more formally involved, but only after a request from the French government.

Based on conversations with government officials and analysts, they are looking at three categories of suspects: self-radicalized individuals; members of Al Qaeda and its affiliates, specifically Al Qaeda's offshoot in North Africa known as AQIM; and those who have traveled to Syria and gotten training from Al Qaeda or the Islamic State.

The latest edition of Inspire magazine, from the Al Qaeda affiliate in Yemen, calls for attacks on France, as well as America and other allies.

Rep. Peter King, R-N.Y., told Fox News he has confidence in French authorities who are pursuing suspects as well. "I would think that one way or the other, they will find them," he said.

King also said the attack should be a "wake-up call" for Congress not to cut funding for DHS, despite an ongoing fight over funding the administration's immigration initiatives.