What will Biden administration's relationship with China look like?

FOX Nation's exclusive special comes to FOX News, looking at the rise of China and its attempt to infiltrate U.S. politics.

EXCLUSIVE: National Counterintelligence and Security Center Director Bill Evanina said no country poses a "broader, more severe" threat to America than China, telling Fox News that its malign foreign influence campaign against the United States will be one of the "bigger challenges" for the incoming Biden administration.

During an exclusive interview with Fox News, Evanina outlined the threat China poses to the United States -- from big data collection to economic espionage, to malign foreign influence to supply chain and critical infrastructure.

BIDEN ADVISED AGAINST DISMISSING ALL OF TRUMP’S FOREIGN POLICY ACHIEVEMENTS

"From a threat perspective, Russia is a significant adversary particularly with regard to cyber intrusions, malign influence, and sowing discord in our democracy," Evanina told Fox News. "However, no country poses a broader, more severe intelligence collection threat to America than China."

Evanina has spent 31 years in federal government -- 24 of which were within the intelligence community -- serving in the FBI, CIA, and the NCSC. Evanina was tapped by then-President Barack Obama’s director of national intelligence, James Clapper, to lead NCSC in 2014, and was asked to stay on in his role throughout the Trump administration. In 2018, the Senate made the NCSC director a Senate-confirmed position, which Evanina was confirmed to with broad bipartisan support.

Evanina, who is leaving his post this week, told Fox News that malign foreign influence is something that the intelligence community has seen intensifying over the last several years.

"Specifically, in the last year, with respect to the death of George Floyd, COVID, the vaccine, the election process — we saw foreign adversaries, including China, working diligently to expose and amplify discourse in the U.S.," Evanina said, pointing to an amplified social media presence from China in an effort to "continue to stoke the fire and sow discourse in America."

"China continues to engage in a highly sophisticated malign foreign influence campaign against America because we are a democracy, and democracy is bad for China," Evanina explained, noting that the country's methods include "bribery, blackmail, covert dealings with businesses, and an effort to influence American policies and attitudes so that they align with China’s interests globally."

"This is not only just a government problem," Evanina warned. "This is a society problem."

"We have to educate America so they know what malign influence tastes like, smells like, looks like, so when they see it, they can call it out," he explained. "This will take a whole of society approach, invoking the government, the intelligence community, law enforcement, social media, big tech companies, to be able to say what this is."

Evanina told Fox News that the U.S. has "an advantage" with the incoming Biden administration, saying they have "started early," receiving their presidential daily briefings, and receiving and analyzing intelligence streams.

"When the Biden administration steps in on Day One, they will have an optic of how pernicious and sophisticated the threat — not only from the Chinese Communist Party, but from Russia, Iran, and others," he said. "And they will have a head start in trying to find the correct avenues to pivot and understand the threat, and find creative ways to mitigate the threat."

"I think the challenge for the Biden administration will be to understand the scope and scale of some of the Chinese threats in the American landscape, domestically, and what is the best course to defeat that," Evanina continued. "I have confidence they’ll be able to do that when they get in here, because there are scores of professional intelligence officers and law enforcement folks that are working around the world that will help them to find solutions." 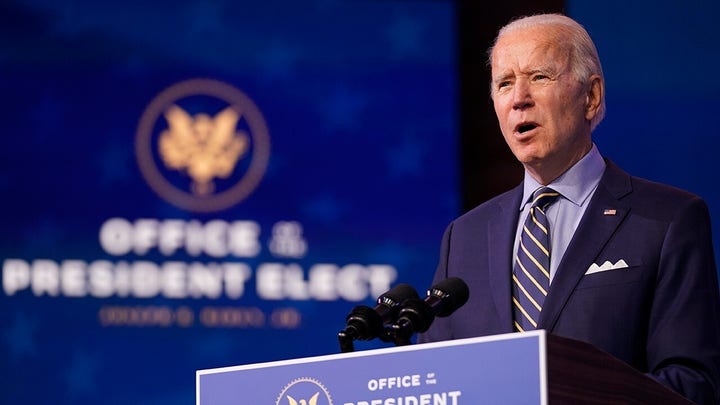 Part of China’s malign foreign influence has focused on politicians and elected officials, with Evanina telling Fox News they have become "actively engaged" in identifying elected officials at the state, local, and federal level, honing in on those that are both anti-China and pro-China.

"The ones who are pro-China or pro-trade, they will facilitate and enhance their candidacies for a long time," Evanina said. "That’s basic lobbying by a foreign government, which is standard."

Last month, a report surfaced revealing that a suspected spy for China got close to a number of politicians, including Rep. Eric Swalwell, D-Calif., and that the FBI stepped in to disrupt the situation — even giving a "defensive briefing" to the Democratic congressman.

Evanina did not comment on that report, or on Swalwell, but said this is "nothing new."

"When it gets to vicious aspects, with respects to cornering officials and putting them in a position where they have to make hard economic choices locally, it makes it really tough for them," Evanina explained. "I think anything that the Chinese Communist Party does with respect to elected officials is nothing new — it is just widespread all across the ecosystem of America."

Meanwhile, Evanina pointed to other threats to the U.S. posed by China, including big data collection.

"Most Americans are unaware that the Chinese government has made collection of health care data a national priority for them. They are collecting the health and genomic data of Americans on a mass scale," Evanina said, noting that while some of the data has been stolen through cyberattacks, "most of it has been obtained legally through investments or partnerships with U.S. institutions that outsource their genetic sequencing to China."

"China can exploit this data for a variety of nefarious purposes, and already has a significant record of exploiting DNA for social control and surveillance of their Uyghur populations at home," he explained.

But Evanina warned that China’s collection of U.S. genomic data is helping to fuel their precision medicine and Artificial Intelligence industries, which he said "poses a long-term threat to the United States’ biotech industry and medicine around the world at large."

"Precision medicine, in my view, is a new global industrial revolution, and if we are not strategic about how we approach this, we may lose out in the long run," Evanina said.

With regard to DNA and biotech, Evanina said that China, when they use precision medicine "can target you if you are predisposed to have particular illnesses or disease, and will be able to know that through your DNA."

"They’ll be able to target you for medicines for your illnesses or ailments that they believe they can help cure, and I believe that is going to be a situation in the future where it could hurt, and eventually eliminate the need for U.S.-based industries, pharmaceuticals, doctors and hospitals," he said.

As for economic espionage, Evanina called it a "significant problem," telling Fox News that the People’s Republic of China’s theft of intellectual property has cost Americans "as much as $500 billion a year."

"That is analogous to taking $4,000 to $6,000 from every American family of four after taxes," Evanina said. "That’s why it matters. It is a staggering number."

"No one begrudges a nation advancing its global markets through fair market competition and domestic innovation — but to achieve its national goals, and the CCP is stealing intellectual property, technology, and innovation from America on a massive scale to further their geopolitical and technological goals," Evanina explained, pointing to a number of different fields.

"You name the area — campuses, businesses, health care, technology, from aerospace to agriculture, on a massive scale, China is stealing intellectual property to further their goals of being No. 1 in the global economy," Evanina said.

Evanina told Fox News that China is at an "unfair competitive advantage," explaining that it is "difficult for us as Americans to understand, because we are clearly bifurcated between the government and the private sector and criminal element."

"That is not the case in China. In China, they all work together," he said. "When you partner with a Chinese company, you need to understand they are obligated to share your data with their intelligence services."

Evanina told Fox News that the U.S. intelligence community has spent the last two years primarily targeting CEOs and boards of directors to make sure they understand the "consequences," and their "vulnerabilities."

"We are asking them to go in with their eyes wide opened," he said. "Go in and understand the risk, and buyer beware. We are not saying don’t do it, we are just saying, be aware."

Evanina shifted, pointing to Big Tech as an example, and explaining the "paradigm differential" that the U.S. and China have.

"Hypothetically, when the CCP and intelligence services come into the U.S. and have a cyber breach, they have data, they take that back, and can force their Chinese companies to condition data, analyze it, and provide it back to Chinese intelligence services for action," Evanina said. "We can’t do that in the U.S."

Evanina said that if the U.S. collects data through an espionage operation overseas, the intelligence community cannot turn to Big Tech companies and ask for help in analyzing it.

"It doesn’t work that way," he said. "And I think that’s the unfair playing advantage as well when it comes to the ever spooky world of espionage."

Evanina added that the intelligence community will "continue to use its own organic capabilities — both technology and humans — to condition data and analyze it."

"They use our trusted suppliers and vendors against us," he explained, adding that "supply chain attacks are most insidious because they violate the basic trust between a supplier and a consumer."

"We have to do a much better job of educating America," Evanina explained.

Evanina told Fox News that China’s intelligence services have taken a "big step" in their tactics and techniques in recent years.

"Instead of going to individual companies, they go to cloud service providers to get one stop shopping," he explained. "That’s a change we have to be prepared for in the future."

"You can build the most accurate, most secure cyber perimeters for your company possible, but if you’re not properly vetting suppliers who provide you IT services and procurement, you’re going to let them inside your doors and not even be aware that they’re there," he said.

Evanina said data clouds have "made the job much more difficult from an investigative perspective, as well as a client services perspective."

"Imagine a bank wants to provide very sensitive financial datas for big companies, and they want to store that data in a cloud service provider," Evanina explained. "Now imagine the company is hacked or breached by CCP intelligence services and that data is stolen."

"Who do we blame? Do we blame our bank or the cloud service provider who allowed the breach?" he said. "What are our rights? What is the third-party data-sharing agreement? If you are a business, or a bank, the right answer for you is to aggregate data in a cloud, but the cloud is responsible for hundreds of banks that they’re holding."

He added: "We need to have accountability."

"It is a really complicated problem set that the Biden administration will have to tackle," Evanina said. "On privacy, and civil liberties, and, at the same time, protection of data."