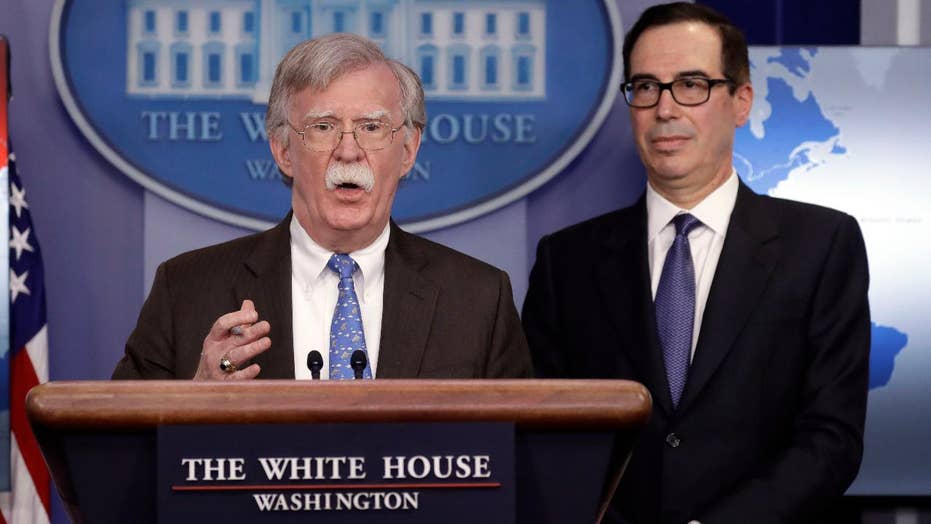 In an effort to increase pressure on President Nicolas Maduro, the U.S. Treasury will block $7 billion in assets of Venezuela's state-run oil firm PDVSA.

National Security Adviser John Bolton, meanwhile, warned that "all options are on the table" and that Venezuela would face a "significant response" if any harm came to U.S. diplomatic personnel, Guaido, or Venezuela's opposition-led National Assembly.

Words on Bolton's notepad that were visible during the briefing -- "5,000 troops to Colombia" -- were related to the situation in Venezuela, White House officials confirmed to Fox News. One idea being debated may include pre-positioning U.S. forces in Colombia in case they are needed in Venezuela.

The potentially devastating economic sanctions were aimed at increasing pressure on Maduro to cede power to the opposition. Venezuela is heavily reliant on the U.S. for its oil revenue, and sends 41 percent of its oil exports to the United States.

"Today's designation of PDVSA will help prevent further diverting of Venezuela's assets by Maduro and preserve these assets for the people of Venezuela," Treasury Secretary Steven Mnuchin said during a White House news conference. "The path to sanctions relief for PDVSA is through the expeditious transfer of control to the interim president or a subsequent democratically elected government who is committed to taking concrete and meaningful actions to combat corruption."

"I'm sure many of our friends in the Middle East will be happy to make up the supply, as we push down Venezuela's supply," Mnuchin continued.

PDSVA is the acronym for Venezuela's state-owned oil company. Critically, U.S. refiners are among the few customers that pay cash to Venezuela for its oil, because Venezuela's oil shipments to China and Russia are usually taken as repayment for billions of dollars in debts.

A woman playing with her 2-month-old daughter while accompanying her husband, a vegetable vendor, at a wholesale food market in Caracas, Venezuela, on Monday. (AP Photo/Rodrigo Abd)

Mnuchin added: "Effective immediately, any purchases of Venezuelan oil by U.S. entities -- money will have to go into blocked accounts. Now, I've been in touch with many of the refineries -- there is a significant amount of oil that's at sea, that's already been paid for -- that oil will continue to come to the United States."

The sanctions likely will not affect consumer prices at the gas pump but will hit oil refiners, particularly those on the U.S. Gulf Coast. Venezuelan oil exports to the U.S. have declined steadily over the years, falling particularly sharply over the past decade as its production plummeted amid its long economic and political crisis.

"I'm sure many of our friends in the Middle East will be happy to make up the supply."

The U.S. imported less than 500,000 barrels a day of Venezuelan crude and petroleum products in 2017, down from more than 1.2 million barrels a day in 2008, according to the Energy Information Administration.

Still, Venezuela consistently has been the third- or fourth-largest supplier of crude oil to the United States, and any disruption of imports could be costly for refiners. In 2017, the most recent year that data were available, Venezuela accounted for about 6 percent of U.S. crude imports.

Workers and customers at a wholesale food market in Caracas on Monday. (AP Photo/Rodrigo Abd)

Monday's move was intended to "hold accountable those responsible for Venezuela's tragic decline," Mnuchin said. He vowed that the White House would continue to "support interim President Guaido, the National Assembly, and the Venezuelan people's efforts to restore their democracy."

In his own comments minutes earlier, Bolton warned that the U.S. would fiercely protect its personnel in the region.

"The people of Venezuela have had enough of oppression, corruption, and economic hardship," Bolton told reporters, noting that 21 other governments have joined the U.S. in recognizing Guaido as Venezuela's interim president.

Workers waiting for customers at their vegetable stand at a wholesale food market in Caracas on Monday. (AP Photo/Rodrigo Abd)

Bolton added: "We have continued to expose the corruption of Maduro and his cronies. Today's action ensures they can no longer loot the assets of the Venezuelan people. ... Today's measure totals $7 billion in assets blocked today, plus over $11 billion in lost export proceeds over the next year."

"I reiterate that the United States will hold Venezuelan security forces responsible for the safety of all U.S. diplomatic personnel, the National Assembly, and President Guaido," Bolton continued. "Any violence against these groups would signify a grave assault on the rule of law and will be met with a significant response."

Pressed by Fox News later to define "significant response," Bolton demurred, saying the U.S. would not tip its hand.

Florida Republican Sen. Marco Rubio, a vocal critic of Maduro who has called for such sanctions, welcomed the move even before it was announced.

"The Maduro crime family has used PDVSA to buy and keep the support of many military leaders," Rubio said. "The oil belongs to the Venezuelan people, and therefore the money PDVSA earns from its export will now be returned to the people through their legitimate constitutional government."